Juli Briskman, a 50-year-old mother of two, said marketing company bosses called her in and fired her for obscene gesture 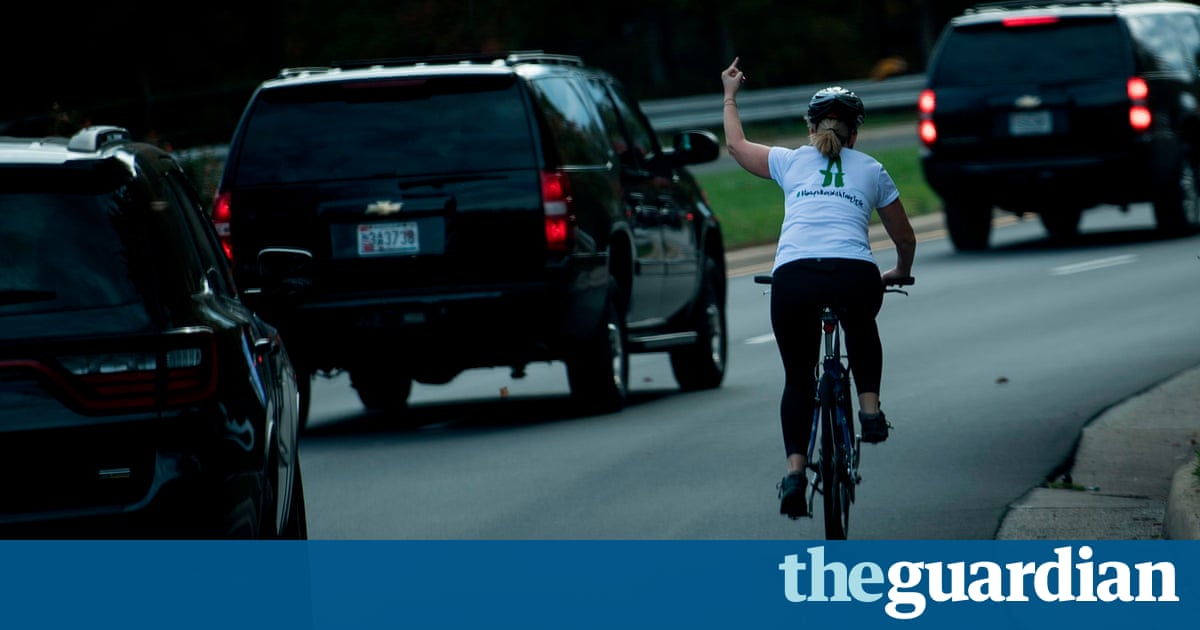 A woman whose picture went viral after she raised her middle finger at Donald Trump as his motorcade passed her on her bicycle has been fired from her job.

Juli Briskman was cycling in Virginia last month when she offered the gesture in a gut reaction to Trumps policies, she said.

He was passing by and my blood just started to boil, she told the Huffington Post. Im thinking, Daca recipients are getting kicked out. He pulled ads for open enrollment in Obamacare. Only one third of Puerto Rico has power. Im thinking, hes at the damn golf course again.

I flipped off the motorcade a number of times.

A photographer traveling with the presidential motorcade snapped Briskmans picture and the image quickly spread across news outlets and social media. Many hailed Briskman as a hero, with some saying she should run in the 2020 election. Late-night comedy hosts also picked up the story.

Briskman had been working as a marketing and communications specialist for a Virginia-based federal contractor, Akima, for six months. She thought it best to alert the HR department to the online fuss. Bosses then called her into a meeting, she said.

They said, Were separating from you, Briskman told the Huffington Post. Basically, you cannot have lewd or obscene things in your social media. So they were calling flipping him off obscene.

She said the company was displeased she had used the image as her profile picture on Twitter and Facebook, and told her it violated social media policy and could hurt the companys reputation as a government contractor.

Briskman said she pointed out that her social media pages do not mention her employer, and that the incident happened on her own time. She also said another employee had written a profane insult about someone on Facebook, but had been allowed to keep his job after deleting the post and being reprimanded.

Virginia, however, has at will employment laws, meaning private-sector employers can fire people for any reason.

Suddenly, the 50-year-old mother of two found herself looking for a new job.

Briskman, who votes Democratic, said she planned to look for a new job with an advocacy group she believes in, such as Planned Parenthood or People for the Ethical Treatment of Animals.

After leaving his Virginia golf club and before passing Briskman, Trumps motorcade passed a pedestrian who gave a vigorous thumbs-down gesture. Another woman had been standing outside the entrance to the golf club, holding a sign saying Impeach.

As news of Briskmans firing spread, many social media users asked why she was being penalized for expressing free speech on her own time, under the first amendment to the US constitution.

Akima did not immediately respond to a request for comment. On Monday, its website went down. Someone began a crowdfunding page online to raise money for Briskman.

Briskman said she had no regrets about the attention her public show of displeasure received. In fact, she said, she was happy to be an image of protest.

In some ways, Im doing better than ever, she said. Im angry about where our country is right now. I am appalled. This was an opportunity for me to say something.