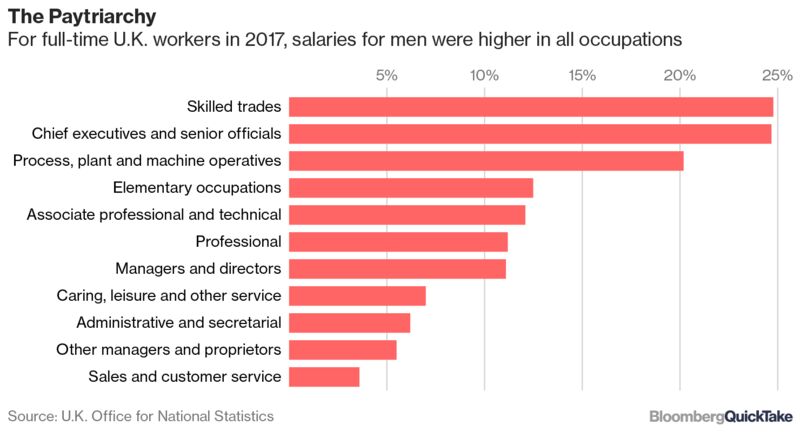 Barclays Plc pays female employees at its investment bank division just under half as much as male colleagues on average, highlighting the gender imbalances in the industry and the concentration of men in highly paid roles.

The gender pay gap widens to 79 percent for discretionary bonuses paid to employees at its international unit, which houses the corporate and investment bank, said the London-based company, the first major bank with British operations to disclose such data. At the U.K. ring-fenced bank, women earn 26 percent less than men and receive bonuses that are 60 percent lower, according to the lender’s annual report.

Barclays is “confident that men and women across our organization are paid equally for doing the same job,” Chief Executive Officer Jes Staley told reporters Thursday. “I want to make it clear that Barclays is doing its part in the long evolution of providing gender equality. We are not going to give absolute targets, but we’d like to get the gap down.”

The disparity in Barclays’s gender pay is exacerbated by a disproportionate number of men in senior positions at the bank. The bank employs 79,900 globally, of which about 44 percent are female. Of the 555 senior managers, less than a third are women, the bank said in the report. There is only one woman on Barclays’s nine-member group executive committee, Laura Padovani, who is the firm’s interim chief compliance officer.

The gap in pay at Barclays is “shocking,” said lawmaker Nicky Morgan, chair of the U.K. parliament’s Treasury Committee. “Barclays has signed up to the Women in Finance Charter, which commits signatories to supporting the progression of women into senior roles in the financial services sector. One way of reducing the gender pay gap is to increase the proportion of women in more senior roles, so it appears that Barclays is on the right track.”

So far, fewer than 1,200 companies have provided the newly required disclosures, out of more than 9,000 estimated to be eligible, according to a government website. Banks including HSBC Holdings Plc, Goldman Sachs Group Inc., JPMorgan Chase & Co. are yet to disclose their numbers. Firms with 250 employees or more in Britain have until April 4 to report the difference between what men and women earn.

For more on the gender pay gap in the U.K., click here

“There’s no silver bullet; for banks and City firms it’s about getting more women established in senior executive roles, so they can in turn embed a culture that’s more attuned to the needs of both women and men,” said Dominie Moss, founder of The Return Hub, which places women returning from career breaks in financial-services jobs.

For more on gender discrimination in the workplace, check out the podcast: