If King were alive today, his words would threaten most of those who now sing his praises 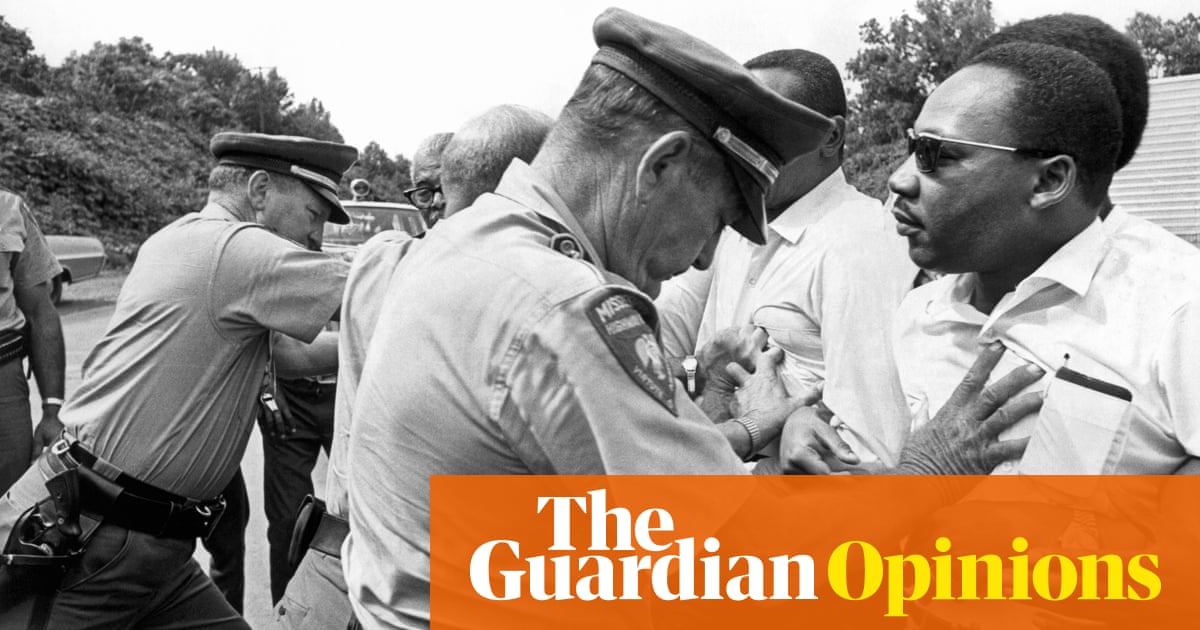 The major threat of Martin Luther King Jr to us is a spiritual and moral one. Kings courageous and compassionate example shatters the dominant neoliberal soul-craft of smartness, money and bombs. His grand fight against poverty, militarism, materialism and racism undercuts the superficial lip service and pretentious posturing of so-called progressives as well as the candid contempt and proud prejudices of genuine reactionaries. King was neither perfect nor pure in his prophetic witness but he was the real thing in sharp contrast to the market-driven semblances and simulacra of our day.

In this brief celebratory moment of Kings life and death we should be highly suspicious of those who sing his praises yet refuse to pay the cost of embodying Kings strong indictment of the US empire, capitalism and racism in their own lives.

We now expect the depressing spectacle every January of Kings fans giving us the sanitized versions of his life. We now come to the 50th anniversary of his assassination, and we once again are met with sterilized versions of his legacy. A radical man deeply hated and held in contempt is recast as if he was a universally loved moderate.

These neoliberal revisionists thrive on the spectacle of their smartness and the visibility of their mainstream status yet rarely, if ever, have they said a mumbling word about what would have concerned King, such as US drone strikes, house raids, and torture sites, or raised their voices about escalating inequality, poverty or Wall Street domination under neoliberal administrations be the president white or black.

The police killing of Stephon Clark in Sacramento may stir them but the imperial massacres in Yemen, Libya or Gaza leave them cold. Why? Because so many of Kings fans are afraid. Yet one of Kings favorite sayings was I would rather be dead than afraid. Why are they afraid? Because they fear for their careers in and acceptance by the neoliberal establishment. Yet King said angrily: What youre saying may get you a foundation grant, but it wont get you into the Kingdom of Truth.

The neoliberal soul craft of our day shuns integrity, honesty and courage, and rewards venality, hypocrisy and cowardice. To be successful is to forge a non-threatening image, sustain ones brand, expand ones pecuniary network and maintain a distance from critiques of Wall Street, neoliberal leaders and especially the Israeli occupation of Palestinian lands and peoples.

Martin Luther King Jr turned away from popularity in his quest for spiritual and moral greatness a greatness measured by what he was willing to give up and sacrifice due to his deep love of everyday people, especially vulnerable and precious black people. Neoliberal soul craft avoids risk and evades the cost of prophetic witness, even as it poses as progressive.

The killing of Martin Luther King Jr was the ultimate result of the fusion of ugly white supremacist elites in the US government and citizenry and cowardly liberal careerists who feared Kings radical moves against empire, capitalism and white supremacy. If King were alive today, his words and witness against drone strikes, invasions, occupations, police murders, caste in Asia, Roma oppression in Europe, as well as capitalist wealth inequality and poverty, would threaten most of those who now sing his praises. As he rightly predicted: I am nevertheless greatly saddened that the inquirers have not really known me, my commitment or my calling.

If we really want to know King in all of his fallible prophetic witness, we must shed any neoliberal soul craft and take seriously in our words and deeds his critiques and resistances to US empire, capitalism and xenophobia. Needless to say, his relentless condemnation of Trumps escalating neo-fascist rule would be unequivocal but not to be viewed as an excuse to downplay some of the repressive continuities of the two Bush, Clinton and Obama administrations.

In fact, in a low moment, when the American nightmare crushed his dream, King noted: I dont have any faith in the whites in power responding in the right way theyll treat us like they did our Japanese brothers and sisters in World War II. Theyll throw us into concentration camps. The Wallaces and the Birchites will take over. The sick people and the fascists will be strengthened. Theyll cordon off the ghetto and issue passes for us to get in and out.

These words may sound like those of Malcolm X, but they are those of Martin Luther King Jr with undeniable relevance to the neo-fascist stirrings in our day.

Kings last sermon was entitled Why America May Go to Hell. His personal loneliness and political isolation loomed large. J Edgar Hoover said he was the most dangerous man in America. President Johnson called him a nigger preacher. Fellow Christian ministers, white and black, closed their pulpits to him. Young revolutionaries dismissed and tried to humiliate him with walkouts, booing and heckling. Life magazine echoing Time magazine, the New York Times, and the Washington Post (all bastions of the liberal establishment) trashed Kings anti-war stance as demagogic slander that sounded like a script for Radio Hanoi.

And the leading black journalist of the day, Carl Rowan, wrote in the Readers Digest that Kings exaggerated appraisal of his own self-importance and the communist influence on his thinking made King persona non-grata to Lyndon Johnson and has alienated many of the Negros friends and armed the Negros foes.

One of the last and true friends of King, the great Rabbi Abraham Joshua Heschel prophetically said: The whole future of America will depend upon the impact and influence of Dr King. When King was murdered something died in many of us. The bullets sucked some of the free and democratic spirit out of the US experiment. The next day over 100 American cities and towns were in flames the fire this time had arrived again!

Today, 50 years later the US imperial meltdown deepens. And Kings radical legacy remains primarily among the awakening youth and militant citizens who choose to be extremists of love, justice, courage and freedom, even if our chances to win are that of a snowball in hell! This kind of unstoppable King-like extremism is a threat to every status quo!