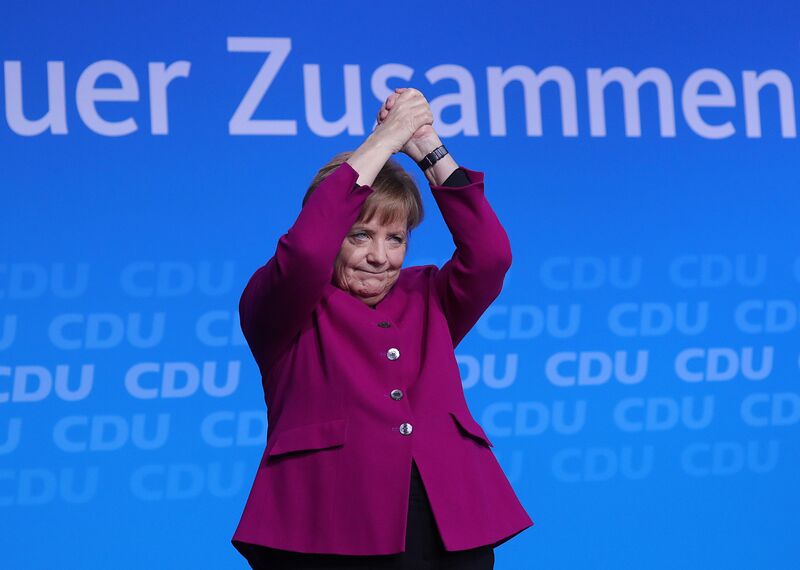 Germany’s Social Democrats voted to join Chancellor Angela Merkel’s next government, clearing the last hurdle to her fourth term and restoring a sense of political stability in Europe’s biggest economy.

SPD members approved the coalition pact by a wider-than-expected margin, which may make it easier for the party to effectively govern with Merkel’s Christian Democrat-led bloc. The result, unsealed on Sunday morning, was 66 percent in favor to 34 percent against. Before the vote, SPD leaders had said they hoped for 60 percent support.

The chancellor can expect to be re-inaugurated by mid-March, allowing her to move ahead with priorities such as working with Emmanuel Macron to strengthen the euro zone and coordinating on a united European front against Chinese encroachment.

“We now have clarity,” interim Social Democratic chairman Olaf Scholz told reporters. “The SPD will join the next government.”

While the impasse in Berlin hasn’t dented Germany’s economic boom, it’s held back policy making since Merkel won a national election in September with her bloc’s worst result since 1949. That weakness, and the arrival of a far-right party in parliament, reflect a changing political landscape that almost derailed Merkel’s bid to extend her 12 years in office.

“Let’s get to work — Germany and Europe,” Peter Altmaier, Merkel’s chief of staff, tweeted seconds after the announcement. Merkel welcomes the “clear result” and looks forward to working with the SPD again, her Christian Democratic Union said on Twitter.

With a resumption of the “grand coalition” government now assured, the SPD’s pick for finance minister will be among the most-watched decisions ahead. Scholz, the mayor of Hamburg and a centrist Social Democrat, is viewed as the front-runner for a post the party wrested from Merkel in the coalition deal sealed in February. The Social Democrats plan to unveil their cabinet nominations on March 12.

Fending off a youthful grass-roots revolt against staying in government allows the Social Democrats to serve as Merkel’s junior partner for the third time in the grand coalition of Germany’s two biggest parties. It’s a sign that the political center, while diminished, is holding after the longest coalition-building talks since World War II.

Merkel, reduced to acting chancellor for months, has said she’ll serve a full term until the next scheduled election in 2021. Even so, she’s begun preparing the CDU for her eventual departure.

The Social Democrat ballot was both the final hurdle and the last option for a Merkel-led majority government after the pro-market Free Democrats, a CDU ally in the past, scuttled a first set of coalition talks. That breakdown, and turmoil in the SPD after its worst postwar election result, made it unusually difficult to build a government alliance.

Polls suggest Merkel retains a solid power base, with 52 percent of the general public and 85 percent of her bloc’s supporters saying they favor her serving another term, according to an FG Wahlen poll for broadcaster ZDF published last week.

Though some her most outspoken critics view Merkel as too liberal, only 35 percent of her bloc’s backers say they want the CDU to shift to the right, according to the poll.