Washington (CNN)An emergency alert notification sent out on Saturday claiming a “ballistic missile threat inbound to Hawaii” was a false alarm, according to state leaders and emergency officials, who blamed it on an employee who “pushed the wrong button.”

While the message caused concern on social media, the Hawaii Emergency Management Agency quickly responded on Twitter, saying, “NO missile threat to Hawaii.”

“It was a mistake made during a standard procedure at the change over of a shift, and an employee pushed the wrong button,” he said.

The warning went out to television and radio as well as cell phones, Ige added.

Ige also tweeted that he is meeting with top defense and emergency management officials from the state “to determine what caused this morning’s false alarm and to prevent it from happening again.”

The governor’s remarks come after Hawaii Emergency Management Agency Administrator Vern Miyagi headedto the agency’s 24-hour operations center to find out why the false alert was sent out, according to an email to CNN.

“The warning was a mistake,” Miyagi said. 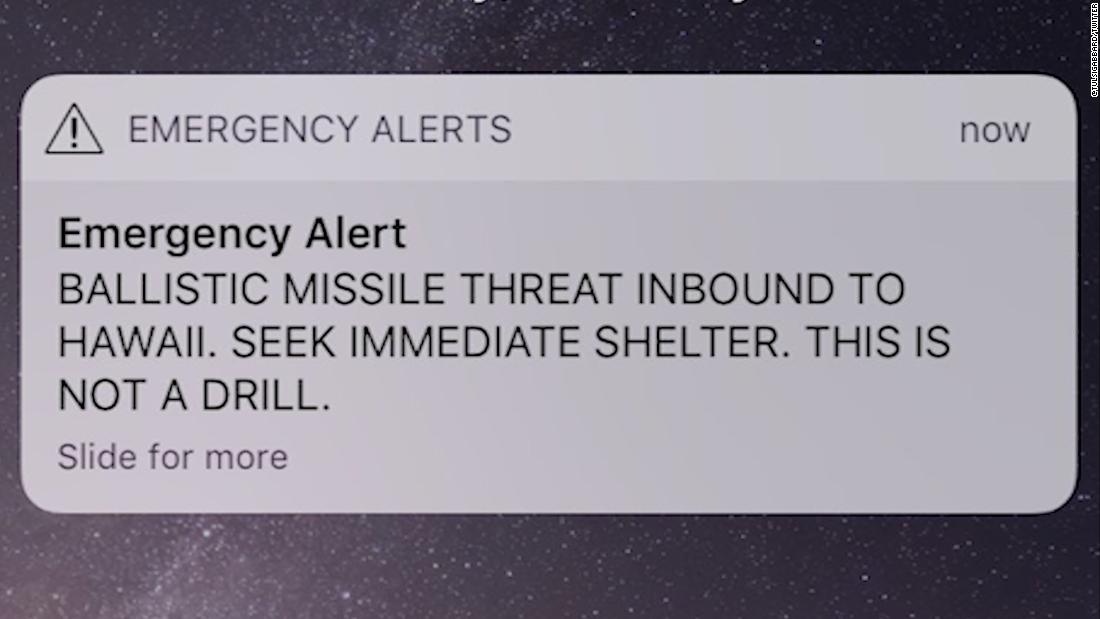 A second emergency alert was sent to phones in Hawaii 38 minutes after the initial message confirming the false alarm.

CNN was told by a viewer in Hawaii that both the initial threat warning and the message of false alarm more than 30 minutes later came across the TV warning notification system. 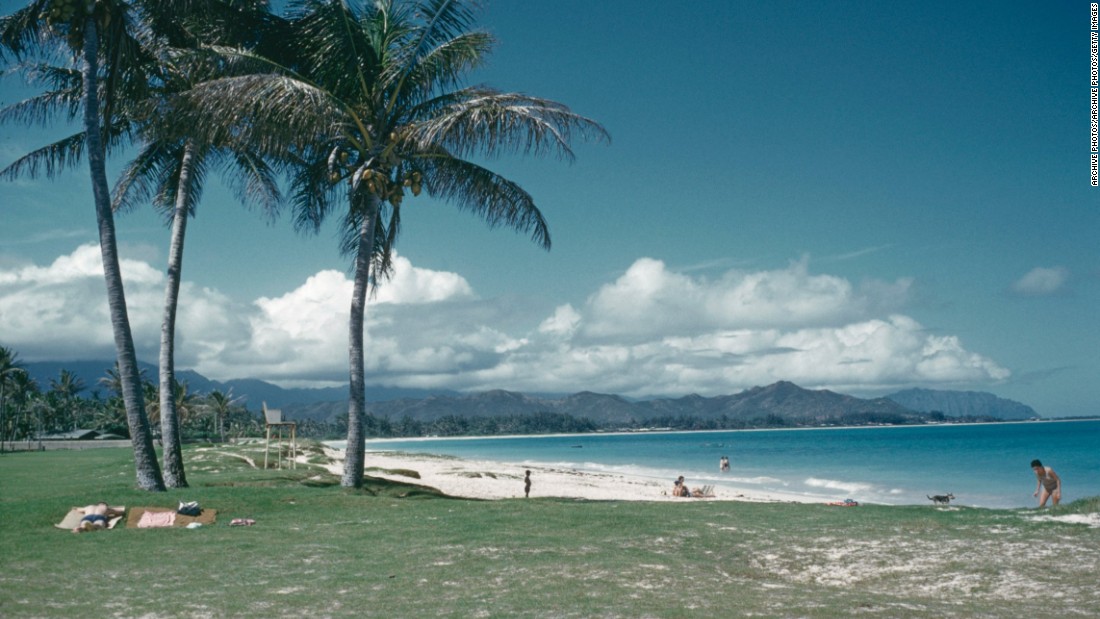 Hawaii Rep. Tulsi Gabbard also posted to Twitter soon after the initial alert, reassuring citizens that she has confirmed with officials that “there is no incoming missile” and told CNN’s Jake Tapper the alert was “inadvertent.”

Commander David Benham, a spokesman for US Pacific Command confirmed in a statement that there is no threat: “USPACOM has detected no ballistic missile threat to Hawaii,” the statement read. “Earlier message was sent in error. State of Hawaii will send out a correction message as soon as possible.”

President Donald Trump was at the golf course when the initial alert went out, according to pool reports.

He was briefed on the incident by Deputy National Security Adviser Ricky Waddell and later by White House chief of staff John Kelly, in addition to speaking to national security adviser HR McMaster, a White House official said.

The official did not provide timings of the briefings.

Waddell is the only one of the three traveling with the President this weekend. 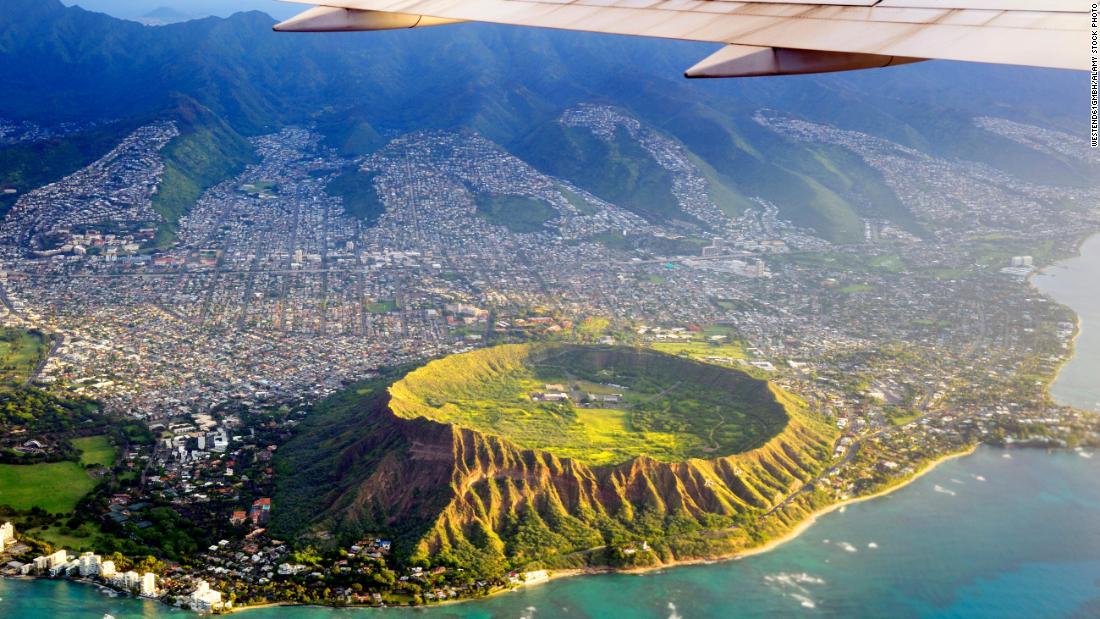 Hawaii Sen. Brian Schatz also took to Twitter on Saturday in the wake of the false alarm.

“There is no missile threat,” the Democratic senator tweeted. “It was a false alarm based on a human error. There is nothing more important to Hawaii than professionalizing and fool-proofing this process.”

“AGAIN FALSE ALARM,” he wrote in a second tweet. “What happened today is totally inexcusable. The whole state was terrified. There needs to be tough and quick accountability and a fixed process.”

Hawaii Democratic Sen. Mazie Hirono echoed that point in her own tweet.

“At a time of heightened tensions, we need to make sure all information released to community is accurate,” she wrote. “We need to get to the bottom of what happened and make sure it never happens again.”

The FBI’s Strategic Information and Operations Center, Department of Homeland Security and Federal Emergency Management Agency are monitoring the situation, a US official told CNN.

How does the military track missile launches?

The US military maintains a complex and integrated network of sensors and detection capabilities in the Pacific to track ballistic missile activity, a network that has been — of necessity — improved in recent years, according to CNN military analyst John Kirby.

Real-world missile launches are detected immediately by satellites that discern the infrared signature right off the launching pad.

Tracking, verification and analysis would be provided to civil authorities by US Strategic and Pacific Commands, Kirby said.

Hawaii’s emergency management system does not have this capability on its own and would rely on the military’s verification and analysis of the threat, he said.

On Saturday evening, former Defense Secretary William Perry warned it wasn’t out of the realm of possibility that a nuclear war could start by accident if proper safeguards aren’t taken.

“The risk of accidental nuclear war is not hypothetical — accidents have happened in the past, and humans will err again,” tweeted Perry, who served under former President Bill Clinton. “When the lives of millions are at risk, we must do more than just hope that mistakes won’t happen.”

What will state officials do now?

State officials said in a news conference Saturday they are currently suspending tests of the system until the investigation is done. They have implemented a two-factor identification in sending alerts and an automated way of notifying the public of a false alarm.

Officials also said they are reviewing why some sirens on the island were triggered by the alert when they shouldn’t have been and why some people did not receive the alert to their phones although it was a false alarm.

“Today is a day that most of us will never forget. A day when many in our community thought our worst nightmare might actually be happening,” Ige said, adding “I know first-hand that what happened today was totally unacceptable, and many in our community was deeply affected by this. And I’m sorry for that pain and confusion that anyone might have experienced.”