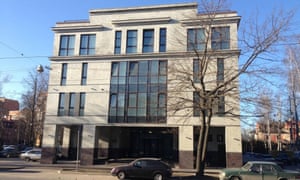 55 Savushkina Street, St Petersburg, said to be the headquarters of Russias troll army. Photograph: Shaun Walker for the Guardian

One defendant, Irina Kaverzina, is accused of admitting her involvement in the operation and a subsequent coverup in an email to a relative in September last year, after Muellers inquiry had begun. We had a slight crisis here at work: the FBI busted our activity, Kaverzina allegedly wrote, so I got preoccupied with covering tracks together with the colleagues.

The Russians are also accused of working to suppress turnout among ethnic minority voters. They allegedly created an Instagram account posing as Woke Blacks and railed against the notion that African Americans should choose Clinton as the lesser of two devils against Trump.

In early November 2016, according to the indictment, the Russian operatives used bogus United Muslims of America social media accounts to claim that American Muslims [are] boycotting elections today.

Following Trumps victory, the Russian operation promoted allegations of voter fraud by the Democratic party, according to Muellers team. Around that time, Trump repeatedly claimed without evidence that he would have won the popular vote if not for large-scale voter fraud.

Separately, Muellers office announced that Richard Pinedo, of Santa Paula, California, had pleaded guilty to identity fraud. Pinedo, 28, admitted to running a website that offered stolen identities to help customers get around the security measures of major online payment sites. It was not made clear whether his service had been used by the Russian operatives.

Rosenstein said no contact had been made with Russian authorities regarding the charges so far, but that US officials intended to seek extradition of the defendants.

US intelligence agencies previouslyconcluded that Russians mounted an attack on the US election system aimed at electing Donald Trump to the presidency.

Mueller is conducting a criminal inquiry into interference by Russians and possible collusion by Trumps campaign. Two Trump campaign advisers have pleaded guilty to lying to the FBI. Two others have been charged with federal crimes.

US investigators have long signalled their belief that Prigozhin, a 56-year-old billionaire businessman, is behind Russias internet troll factories.

Nicknamed the Kremlins chef, Prigozhin once ran Putins favourite restaurant in St Petersburg, after which he was awarded multi-billion pound state catering contracts.

He provided catering for Dmitry Medvedevs presidential inauguration in 2008, and also has lucrative contracts to feed Russias army and Moscows schoolchildren.

Prigozhin, who has also been linked to the Wagner Group, a shadowy Kremlin-linked private military contractor believed to be operating in Syria, was included on a US sanctions list in July.

Speaking to the RIA Novosti state news agency on Friday, Prigozhin said: The Americans are really impressionable people, they see what they want to see. I have great respect for them. If they want to see the devil let them see him.

Thirteen people carried out interference in the US elections? Thirteen people against special services with a budgets of billions? she wrote in a Facebook post.

Vladimir Putins spokesman Dmitry Peskov told Russian media he had not yet had a chance to study the indictments.