Offended by Koreans eating dog? I trust youve never had a bacon butty 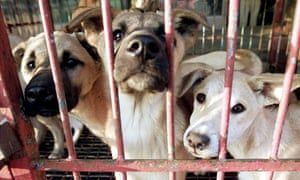 If you are a meat eater who is shocked by how dogs are treated in South Korea, maybe you should look at all meat production with fresh eyes. Photograph: Yun Suk-Bong/Reuters

CNN slammed the brutal and sinister trade, while USA Today described the scene at a dog farm, focusing in on the animals pitiful whines and yelps. The Mirror sent a reporter to write about the hell of dog farms, and trailed a follow-up story about six lucky rescued pups being flown to the UK. The Mails expos showed readers the before-and-after of the process: first photos of terrified dogs huddled in cages, then photos of dog soup being cooked.

Frightened animals being caged, killed and turned into food. If you are a meat eater who is shocked by how dogs are treated in South Korea, maybe you should look at all meat production with fresh eyes.

CNN report that the dogs are left alone in metal cages similar to chicken coops and its all legal. But 9 billion chickens are slaughtered for their meat each year in the US. Most of them are intensively farmed. Did you know that 93% of pigs killed for meat in the UK are factory-farmed, and 60% of sows reared here are kept in metal crates just centimetres bigger than their body? Farmers openly admit they cut off the pigs tails and clip or grind down their teeth without anaesthetic. In 2009, undercover researchers from the animal welfare group Animal Aid filmed UK slaughterhouse workers stubbing out cigarettes in pigs faces.

Yes, dogs are smart and friendly but so are pigs. Researchers from Cambridge University found pigs are as smart as three-year-old humans. They can play computer games and recognise people they met several years ago. They develop trust and empathy like we, and dogs, do. Few people relish the thought of any animals being slaughtered so its normal for those who eat meat to try to justify it. Just as westerners get angry about people in Asia eating dogs and cats, many Indians get outraged by westerners eating cows. People shake their heads in disbelief at guinea pigs and alpacas being served up in South America.

But ultimately, whats the moral difference in any of it? It simply cant be the case that the slaughter of all animals is wrong apart from the ones you want to feast on. Once you stop trying to convince yourself of that, a huge weight is lifted from your shoulders. Then you can stand against the exploitation of all animals, regardless of what they are and where theyre being killed.

Chas Newkey-Burden is an author and journalist