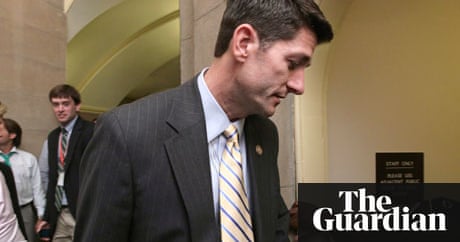 Paul Ryan, Mitt Romneys vice-presidential running mate, sold stock in US banks on the same day he attended a confidential meeting where top level officials disclosed the sector was heading for a deep crisis.

The congressman on Monday denied profiting from information gleaned from the meeting on 18 September 2008 when Federal Reserve chairman Ben Bernanke, then treasury secretary Hank Paulson and others outlined their fears for the banking sector. His office said he had no control over the trades.

Public records show that on the same day as the meeting, Ryan sold stock in troubled banks including Wachovia and Citigroup and bought shares in Goldman Sachs, Paulsons old employer and a bank that had been disclosed to be stronger than many of its rivals. The sale was not illegal at the time.

Not long after the meeting, Wachovias already troubled share price went into free fall. It plunged 39% on the afternoon of 26 September alone as investors worried the bank would collapse. It was eventually taken over by Wells Fargo for $15bn, a fraction of its former value.

Citigroups share price fell soon after the meeting. In October 2008 Citigroup was among the largest beneficiary of the troubled asset relief program (Tarp), the taxpayer-funded bailout of the banking sector.

Ryan was a supporter of the Tarp bailout a position that has put him at odds with the right wing of his party despite his otherwise conservative credentials. Goldman Sachs and Wells Fargo are now among his largest financial supporters, according to the Center for Responsive Politics.

The trades were highlighted at the weekend by the Richmonder, a left-leaning political blog in Virginia.

After the story was picked up by the media on Monday, the Romney campaign moved to deny it. Talking Points Memo quoted Larry Gaffney, an independent accountant for the partnership that handled the trades questioned by commentators, said the shares were not controlled by Ryan.

Trades are done automatically based on an algorithm on a regular basis, said Gaffney, in a statement to TPM that was provided by the Romney campaign. In addition, this index was held at the time within a partnership in which Rep. Ryan had and continues to have no trading authority.

Until this year members of Congress were allowed to trade on price-sensitive information gathered at Washington meetings. Nor is Ryan alone in having done so. CBSs 60 Minutes criticised Democrat Nancy Pelosi for buying into Visas initial public offering as the House discussed credit card legislation.

After the CBS documentary, pressure mounted for change. In April, Barack Obama signed legislation that bars members of Congress and other federal workers from profiting from non-public information learned on the job. As well as banning insider trading the Stop Trading on Congressional Knowledge (Stock) Act requires members of Congress to post details of transactions exceeding $1,000.

In April the Office of Congressional Ethics cleared Spencer Bachus, Republican chairman of the House Financial Services Committee, of allegations of insider dealing. Critics had charged he had taken advantage of insider information to trade shares on numerous occasions.

Bachus was present at the meeting that Ryan attended with Bernanke and Paulson. The next day he traded short options, betting on a decline in share prices in the financial services sector.

Attendees at the meeting have said Bernanke and Paulsons warnings were met with stunned silence. When you listened to him describe it you gulped, Senator Charles Schumer told the New York Times.

This article was updated at 9.30pm ET on 13 August to reflect a denial of impropriety by on the part of Ryan.