This is a fight between a young, diverse, feminist generation against an old, white, male minority desperate to hang on to power 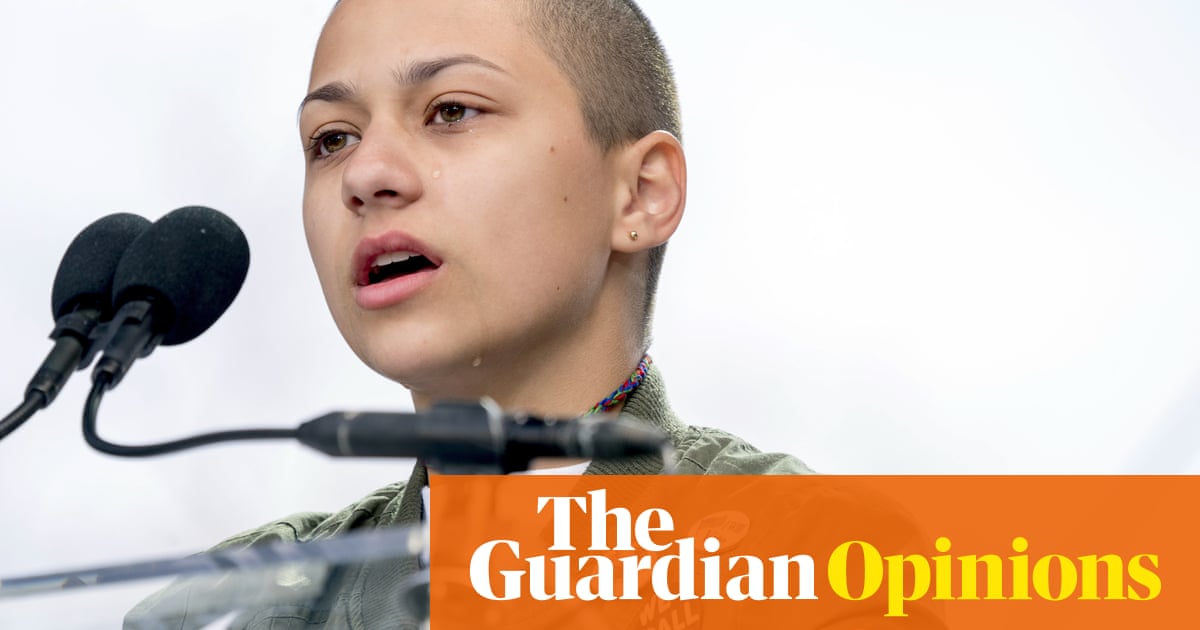 Young activists raised on social media and memes were bound to come up with the best protest signs. At the March for Our Lives, and the national school walkout earlier this month, teenagers held posters blasting politicians and declaring, I should be writing my college essay, not my will. Some were hilarious, many were sad, and all were designed to go viral.

The one that I cant get out of my mind, though, was held by a teenage Pakistani immigrant in New Yorks Union Square: Girls clothing in school is more regulated than guns in America.

The 18-year-old high school senior who carried the poster, Sana Haider, tells me she wanted to find the perfect sign that stood out and one that reflected her feminist values. She just went to her first protest, the Womens March, last year.

We know that the gun debate is a culture war. But Haider and her sign reminded me that its more than an abstract debate over ideology or constitutional principles. Its a fight between a young, diverse, feminist generation representing an emerging majority and an old, white, male minority desperate to hang on to power. And guns are their security blanket of choice.

Just 3% of Americans own half of the guns in America. And that 3% isnt just anyone. According to a Harvard study flagged by Scientific American this month, the person most likely to stockpile guns in this country is an older, white man from a rural conservative area. And an alarming body of research shows that theyre motivated by racial anxiety and a fear of emasculation.

A 2017 Baylor University study, for example, found that mens attachment to guns often stemmed from economic woes and fear of losing traditional breadwinner status. The researchers wrote that engaging in fantasies about being an NRA good guy who uses his gun to protect his family and community from the bad guys was one way for men to reclaim that threatened masculinity. And in 2015, researchers from the University of Chicago reported that racial resentment was a strong predictor of opposition to gun control; and that the more racist respondents were, the more steadfast that opposition was.

Theres a long history of white male support for gun rights being connected to anger and fear over gains for women and people of color. Thats part of the reason that many of the most irate responses to recent young activists have skewed racist or misogynist.

It should not surprise us that when a Republican politician in Maine attacked student activist Emma Gonzalez, he called her a skinhead lesbian; or that a senior columnist at the rightwing publication Townhall used Twitter to mock the appearance of protesting teenage girls. Just as its no surprise when so many mass shooters are white men with histories of domestic violence, and why so many of their victims are women.

But while issues of race and gender confound and alarm those on the right, young activists are doing nuanced thinking to bolster their work on gun violence. This generation is calling out the hypocrisy of conservatives who abhor government interference unless its over womens bodies, talking about how arming teachers would endanger students of color, and recognizing how white students are getting the support that young Black Lives Matter activists never did. Perhaps the brightest star of this weekends march was 11-year-old Naomi Wadler, who dedicated her speech to black girls and women who were victims of gun violence who in the past have just been numbers.

The new America is made up of communication-savvy, digital natives. Theyre not cowed easily, and they see through the arguments that may have stumped their forebears.

A generation ago, before social media and digital activism, it wouldnt have been mainstream common knowledge that the NRA failed to support Marissa Alexander, a black woman who used a gun to defend herself from domestic violence. Or that they similarly ignored Bresha Meadows, a teenage girl of color who shot her abusive father. But todays young activists can see these failures and hypocrisies clearly and quickly adults dont fool them, nor do well-funded lobbying groups. As Emma Gonzalez said in her viral speech, theyre calling bullshit.

A lot of us adults watching the march and the walkout felt hope for the first time in a long time, and not just because of the incredible signs. We saw a generation who is succeeding where we failed, an emerging new force that thinks differently and who is willing to take the power they democratically deserve.

I, for one, am ready to take my cues from this smart new America for whom creating change comes so easily. As Haider said to me when I asked why she protested, Why wouldnt I? Its insane not to.

From the mouths of babes.