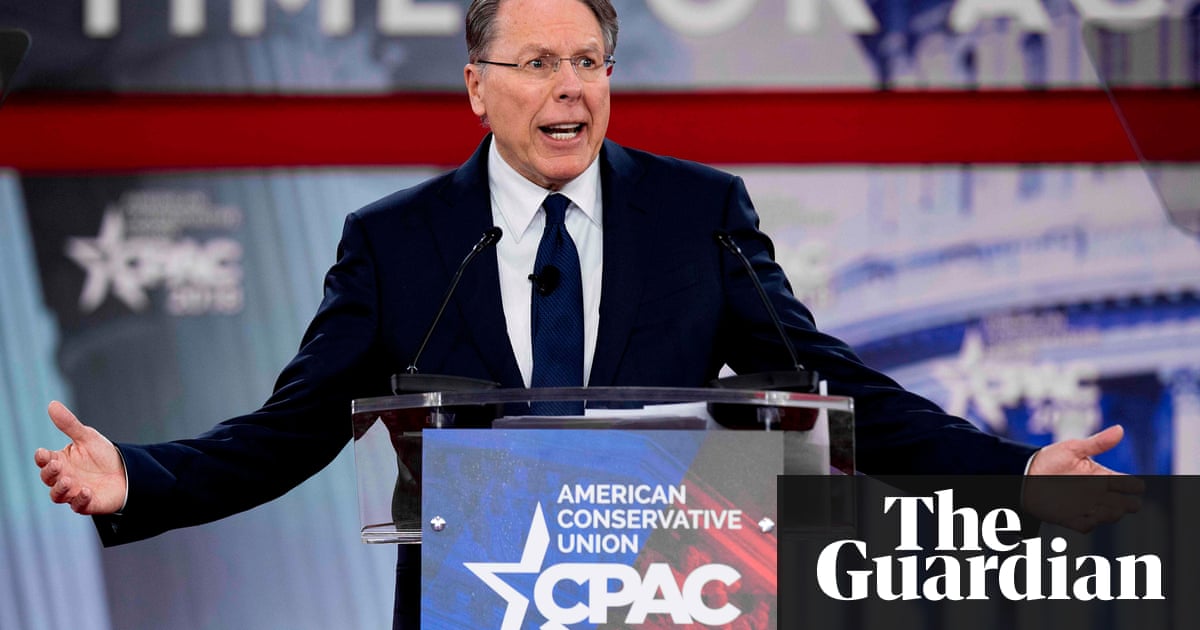 Wayne LaPierre spoke at CPAC in the wake of the Florida school shooting, mounting an unrepentant defense of gun rights

The head of the powerful National Rifle Association (NRA) has broken his silence more than a week after the Florida school shooting with a vituperative attack on gun control advocates, accusing them of exploiting the tragedy to push their agenda.

Wayne LaPierre, whose lobby group faces an unprecedented challenge from the activism of students, including survivors of the massacre, sought to paint his opponents as elites and socialists hellbent on undermining Americans constitutional rights.

The elites dont care not one whit about Americas school system and schoolchildren, he told the Conservative Political Action Conference (CPAC) at the National Harbor in Maryland. If they truly cared, what they would do is they would protect them. For them, its not a safety issue, its a political issue.

Addressing a sympathetic audience of conservative grassroots activists, LaPierre continued: They fantasise about more laws stopping what other laws have failed to stop. So many existing laws were ignored. They dont care if their laws work or not. They just want to get more laws to get more control over people. But the NRA the NRA does care.

The massacre of 17 students and staff at Marjory Stoneman Douglas high school in Parkland, Florida, last week was the second deadliest shooting at an American public school and has spurred extraordinary protests across the country. The debate reached a watershed on Wednesday when students and teachers confronted US Senators in a noisy town hall event televised live by CNN; there were raucous cheers for the idea of sweeping bans on assault weapons.

LaPierres name was initially kept off the agenda at the annual CPAC to protect him from media scrutiny. The NRA often prefers to stay out of the spotlight in the wake of a major shooting.

LaPierre sought to put the warnings in the wider context of a socialist enemy within, who he said oppose our fundamental freedoms enshrined in the bill of rights. He claimed that the Communist Manifesto and Karl Marx were ascendent on university campuses, describing socialism as a political disease.

The NRA chief warned the packed ballroom: You should be anxious and you should be frightened. If these so-called European socialists take over the House and the Senate and, God forbid, they win the White House again our American freedoms could be lost and our country will be changed forever, and the first to go will be the second amendment to the US constitution the right to bear arms.

He continued: We must immediately harden our schools. Every day young children are being dropped off at schools that are virtually wide open, soft targets for anyone bent on mass murder. It should not be easier for a madman to shoot up a school than a bank or jewellery store or some Hollywood gala.

Schools should be the hardest target in this country. Evil must be confronted with all necessary force to protect our kids.

He ended his speech, which was met with a standing ovation, by repeating the notorious mantra he had issued after the Sandy Hook school shooting in Newtown, Connecticut, in 2012: To stop a bad guy with a gun, it takes a good guy with a gun.

Under intense public pressure, there has been speculation that Trump might use his credibility with Republicans to take on the NRA, one of his strongest backers. But on Thursday he tweeted full support: What many people dont understand, or dont want to understand, is that Wayne, Chris [Cox] and the folks who work so hard at the @NRA are Great People and Great American Patriots. They love our Country and will do the right thing. MAKE AMERICA GREAT AGAIN!

The president reaffirmed his proposal to address school shootings by giving some teachers guns, tweeting that it would be a great deterrent to killers. He suggested a little bit of a bonus for trained teachers who are armed.

Trump, who held a listening session with students and parents on Wednesday, also said he would advocate for tightening background checks for gun buyers, with an emphasis on mental health, and lifting the age limit to 21 to buy some types of guns policies less likely to please the powerful pro-gun lobby group.

Many attendees at CPAC expressed support for the idea of arming teachers.

Debi Millman, a fundraiser based in Los Angeles, suggested it was more realistic than restricting a country already awash with guns. How many millions of them are there? Youre never going to be able to keep evil out. A better solution for me is have the schools be able to defend themselves. If criminals know that if they attack a school theyll get their heads blown off, thats a good idea.

Randi Green, a personal trainer from Los Angeles, interjected: Except for the fact most teachers are liberals and would baulk at the idea.

Green was sceptical about the students at Parkland who had been speaking out. Theyre definitely being manipulated, she said. Everybody has a voice but these are young kids and I dont think they know better than lawmakers. I thought they were very disrespectful in the way they speak to people. I think the parents are rooting them on.

Scott Pio, 33, wearing a red Make America great again cap, also backed the proposal for teachers to carry and conceal firearms. We can arm everybody else around important people, why cant we arm everybody around our students, especially as they are soft targets? What are people so afraid of? Even city council managers are already protected by guns.

Pio, a software engineer from Fairfax, Virginia, also suggested making schools more secure, with only one point of entry, and increasing the number of security guards on site. But he was opposed to a ban on semi-automatic weapons. There are plenty of people in rural areas who use guns to protect their homes and go hunting. But Im OK with raising the age to 21 for assault rifles.

Chris Davis, 44, a police officer from Pennsylvania, said he was impressed by the students who have spoken out but criticised liberal campaigners demanding tighter gun controls. These same people say President Trump is a tyrant. The reason you have the second amendment is to protect yourself from a tyrant.

Todd McKinley, 40, a retired soldier from Kingsport, Tennessee, added: The left called him Hitler, but then they want to grab all guns just like Hitler did.