what happens when the city turns off the taps? – Trending Stuff 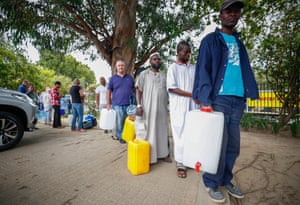 Neighbours are already unhappy that their previously quiet street is now a hive of activity, with people carrying water containers in squeaky shopping trolleys back and forth from the spring to cars parked along the main road. Its a nightmare, says one of the residents of the Cresswell House senior citizens community. They come all through the night. Its so noisy we cant sleep.

It is also far from clear that drought is a social leveller. Wealthy homeowners have drilled boreholes and invested in water tanks so they have an independent supply. Joggers who go out at 5am say they can hear the phut phut of sprinklers being used to water lawns before most people are awake. Some residents have called environmental groups to complain their neighbours are filling swimming pools.

At the other end of the income spectrum, there are worries. The government has promised that standpipes will continue to flow in informal settlements after Day Zero, but there is scepticism in the Kanini neighbourhood of the Langa township. The one pipe that serves 20 families tailed off here last Thursday without explanation. Some locals feel they are being punished because of a public outcry about the waste at a street car-washing centre at the neighbouring settlement of Joe Slovo.

Im worried everyone is worried. It will be a crisis for us, says Nowest Nmoni, who makes a living by brewing Umqombothi beer in oil drums. If we lose water, we lose our income.

Maintaining social programmes will also be a challenge. City officials say hospitals and prisons will run as normal because they have access to aquifers, but questions remain about 819 schools, half of which do not have boreholes. There would be sanitation risks if their toilets were unable to flush, but the authorities insist they will remain open.

The objective is no school closures. We dont want kids on the street compounding issues, says deputy mayor Neilson.

When the Brazilian city of So Paulo faced drought catastrophe in 2015 the army drew up secret plans to take control of reservoirs and water supplies fearing violent unrest, but officials in Cape Town play down such security fears. Though thousands of South African Defence Force and police personnel will be deployed after Day Zero to guard water distribution centres, reservoirs and other strategic areas, they say, the number of officers at each site will be determined by risk assessments of each locations past history of protest or gang activity.

This isnt going to be martial law. It will be low profile, says JP Smith, an alderman responsible for safety and security. There might be some trouble about people cutting queues, but I dont foresee a big increase in crime. The bigger problem will be congestion.

For him, it is a moot point. He believes Day Zero will be avoided. The premier of Western Cape, Helen Zille, however, believes there is a 60% chance that it will occur.

While the debate rages about what will happen, who is to blame and whether the city will be drawn together or pulled apart, Pillay and his colleagues at the disaster risk management office are obliged to prepare for the worst something other cities may soon be obliged to do.

We dont want to create panic. We can avert Day Zero, he says. We had hoped that rainfall would replenish the dams, but it hasnt happened. What this signalled to me what that climate change is reality. If you doubted it before, you cant now.

PrevPreviousFor the first time in its history, the Gerber spokesbaby is a child with Down syndrome – Trending Stuff
NextDuterte to Shift Thousands of Government Workers to New City – Trending StuffNext