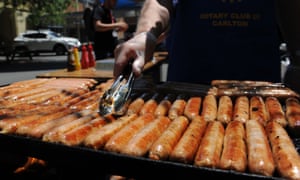 The typical British sausage does not fall into the processed meat category. Photograph: Julian Smith/AAP

This caution has kept us as consumers unnecessarily in the dark. Consider sausages. For years, I believed that the unhealthiest part in a cooked English breakfast was the sausage, rather than the bacon. Before I started to research this article, Id have sworn that sausages fell squarely into the processed meat category. They are wrongly listed as such on the NHS website.

But the average British sausage as opposed to a hard sausage like a French saucisson is not cured, being made of nothing but fresh meat, breadcrumbs, herbs, salt and E223, a preservative that is non-carcinogenic. After much questioning, two expert spokespeople for the US National Cancer Institute confirmed to me that one might consider fresh sausages to be red meat and not processed meat, and thus only a probable carcinogen. (To me, the fact that most sausages are not processed meat was deeply cheering, and set me dancing around the kitchen with glee thinking about toad in the hole.)

In general, if you ask a cancer scientist to distinguish between the risks of eating different types of meat, they become understandably cagey. The two experts at the National Cancer Institute told me that meats containing nitrites and nitrates have consistently been associated with increased risk of colon cancer in human studies. But they added that it is difficult to separate nitrosamines from other possible carcinogens that may be present in processed meats like bacon. These other suspects include haem iron a substance that is abundant in all red meat, processed or not and heterocyclic amines: chemicals that form in meat during cooking. A piece of crispy, overcooked bacon will contain multiple carcinogens, and not all are due to the nitrates.

The problem with this reasoning, as I see it, is that it cant account for why processed meat is so much more closely linked to cancer than cooked red meat. For that, there remains no plausible explanation except for nitrates and nitrites. But looking for clear confirmation of this in the data is tricky, given that humans do not eat in labs under clinical observation.

Most of what we know about processed meat and cancer in humans comes from epidemiology the study of disease across whole populations. But epidemiologists do not ask the kind of detailed questions about food that the people who eat that food may like answers to. The epidemiological data based on surveys of what people eat is now devastatingly clear that diets high in processed meats lead to a higher incidence of cancer. But it cant tell us how or why or which meats are the best or worst. As Corinna Hawkes of City University comments, The researchers dont ask you if you are eating artisanal charcuterie from the local Italian deli or the cheapest hotdogs on the planet.

I would love to see data comparing the cancer risk of eating nitrate-free Parma ham with that of traditional bacon, but no epidemiologist has yet done such a study. The closest anyone has come was a French study from 2015, which found that consumption of nitrosylated haem iron as found in processed meats had a more direct association with colon cancer than the haem iron that is present in fresh red meat.

It may be possible that epidemiologists have not asked people more detailed questions about what kind of processed meats they eat because they assume there is no mass-market alternative to bacon made without nitrates or nitrites. But this is about to change.

The technology now exists to make the pink meats we love in a less damaging form, which raises the question of why the old kind is still so freely sold. Ever since the war on nitrates of the 1970s, US consumers have been more savvy about nitrates than those in Europe, and there is a lot of nitrate-free bacon on the market. The trouble, as Jill Pell remarks, is that most of the bacon labelled as nitrate-free in the US isnt nitrate-free. Its made with nitrates taken from celery extract, which may be natural, but produces exactly the same N-nitroso compounds in the meat. Under EU regulation, this bacon would not be allowed to be labelled nitrate-free.

Its the worst con Ive ever seen in my entire life, says Denis Lynn, the chair of Finnebrogue Artisan, a Northern Irish company that makes sausages for many UK supermarkets, including Marks & Spencer. For years, Lynn had been hoping to diversify into bacon and ham but, he says, I wasnt going to do it until we found a way to do it without nitrates.

When Lynn heard about a new process, developed in Spain, for making perfectly pink, nitrate-free bacon, he assumed it was another blind alley. In 2009, Juan de Dios Hernandez Canovas, a food scientist and the head of the food tech company Prosur, found that if he added certain fruit extracts to fresh pork, it stayed pink for a surprisingly long time.

In January 2018, Finnebrogue used this technology to launch genuinely nitrate-free bacon and ham in the UK. It is sold in Sainsburys and Waitrose as Naked Bacon and Naked Ham, and in M&S as made without nitrites. Kirsty Adams, who oversaw its launch at M&S, explains that its not really cured. Its more like a fresh salted pork injected with a fruit and vegetable extract, and is more perishable than an old-fashioned flitch of bacon but that doesnt matter, given that it is kept in a fridge. Because it is quick to produce, this is much more economically viable to make than some of the other nitrate-free options, such as slow-cured Parma ham. The bacon currently sells in Waitrose for 3 a pack, which is not the cheapest, but not prohibitive either.

I tried some of the Finnebrogue bacon from M&S. The back bacon tasted pleasant and mild, with a slight fruitiness. It didnt have the toothsome texture or smoky depth of a rasher of butchers dry-cured bacon, but Id happily buy it again as an alternative to nitro-meat. None of my family noticed the difference in a spaghetti amatriciana.

Nitrite-free bacon still sounds a bit fancy and niche, but there shouldnt be anything niche about the desire to eat food that doesnt raise your risk of cancer. Lynn says that when he first approached Prosur about the fruit extract, he asked how much they had sold to the other big bacon manufacturers during the two years they had been offering it in the UK. The answer was none. None of the big guys wanted to take it, claims Lynn. They said: It will make our other processed meats look dodgy.

But it also remains to be seen how much consumer demand there will be for nitrite- or nitrate-free bacon. For all the noise about bacon and cancer, it isnt easy to disentangle at a personal level just what kind of risk we are at when we eat a bacon sandwich. OK, so 34,000 people may die each year because of processed meat in their diet, but the odds are that it wont be you. I asked a series of cancer scientists whether they personally ate processed meat, and they all gave slightly different answers. Jill Pell said she was mostly vegetarian and ate processed meats very rarely. But when I asked Fabrice Pierre, a French expert on colon cancer and meat, if he eats ham, he replied: Yes, of course. But with vegetables at the same meal. (Pierres research at the Toxalim lab has shown him that some of the carcinogenic effects of ham can be offset by eating vegetables.)

Our endless doubt and confusion about what we should be eating have been a gift to the bacon industry. The cover-up about the harm of meat cured with nitrates and nitrites has been helped along by the scepticism many of us feel about all diet advice. At the height of the great bacon scare of 2015, lots of intelligent voices were saying that it was safe to ignore the new classification of processed meats as carcinogenic, because you cant trust anything these nutritionists say. Meanwhile, millions of consumers of ham and bacon, many of them children, are left unprotected. Perhaps the most extraordinary thing about this controversy is how little public outrage it has generated. Despite everything, most of us still treat bacon as a dear old friend.

In an ideal world, we would all be eating diets lower in meat, processed or otherwise, for the sake of sustainability and animal welfare as much as health. But in the world we actually live in, processed meats are still a normal, staple protein for millions of people who cant afford to swap a value pack of frying bacon for a few slivers of Prosciutto di Parma. Around half of all meat eaten in developed countries is now processed, according to researcher John Kearney, making it a far more universal habit than smoking.

The real victims in all this are not people like me who enjoy the occasional bacon-on-sourdough in a hipster cafe. The people who will be worst affected are those many on low incomes for whom the cancer risk from bacon is compounded by other risk factors such as eating low-fibre diets with few vegetables or wholegrains. In his book, Coudray points out that in coming years, millions more poor consumers will be affected by preventable colon cancer, as westernised processed meats conquer the developing world.

Last month, Michele Rivasi, a French MEP, launched a campaign in collaboration with Coudray demanding a ban of nitrites from all meat products across Europe. Given how vigorously the bacon industry has fought its corner thus far, a total ban on nitrites looks unlikely.

But there are other things that could be done about the risk of nitrites and nitrates in bacon, short of an absolute veto. Better information would be a start. As Corinna Hawkes points out, it is surprising that there hasnt been more of an effort from government to inform people about the risks of eating ham and bacon, perhaps through warning labels on processed meats. But where is the British politician brave enough to cast doubt on bacon?