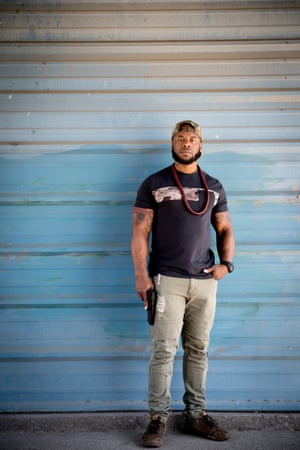 Rakem Balogun in his hometown of Dallas, Texas, days after being released from prison. Photograph: Allison V Smith for the Guardian

Michael German, a former FBI agent and fellow with the Brennan Center for Justices liberty and national security program, said the BIE assessment was extraordinarily overbroad and that the concept was spreading to law enforcement agencies across the US as more black activists were facing surveillance and police harassment.

Authorities have not publicly labeled Balogun a BIE, but their language in court resembled the warnings in the FBIs file. German said the case also appeared to utilize a disruption strategy in which the FBI targets lower-level arrests and charges to interfere with suspects lives as the agency struggles to build terrorism cases.

Sometimes when you couldnt prove somebody was a terrorist, its because they werent a terrorist, he said, adding that prosecutors argument that Balogun was too dangerous to be released on bail was astonishing.

It seems this effort was designed to punish him for his political activity rather than actually solve any sort of security issue.

The official one-count indictment against Balogun was illegal firearm possession, with prosecutors alleging he was prohibited from owning a gun due to a 2007 misdemeanor domestic assault case in Tennessee. But this month, a judge rejected the charge, saying the firearms law did not apply.

The US attorneys office and the FBI declined to comment.

For Balogun, who said that the Tennessee case stemmed from a dispute with a girlfriend and that he was pressured to plead guilty to get out of jail, the decision felt like a victory.

But since his release one week ago, Balogun has also been forced to confront the harsh reality of life post-incarceration: he lost his vehicle, job and home; his son was forced to move and transfer schools and Balogun missed much of the first year of his newborn daughters life.

This has been a nightmare for my entire family, he said, adding that he was still recovering from the monotony and isolation of incarceration: It was like living like a dog confined to a small backyard.

Balogun said he also had to accept the fact that the government would probably continue to monitor to him and could seek new ways to disrupt his life. But the threat wouldnt stop him from organizing and speaking out, he added: As long as my community needs me to serve them, Ill be there.