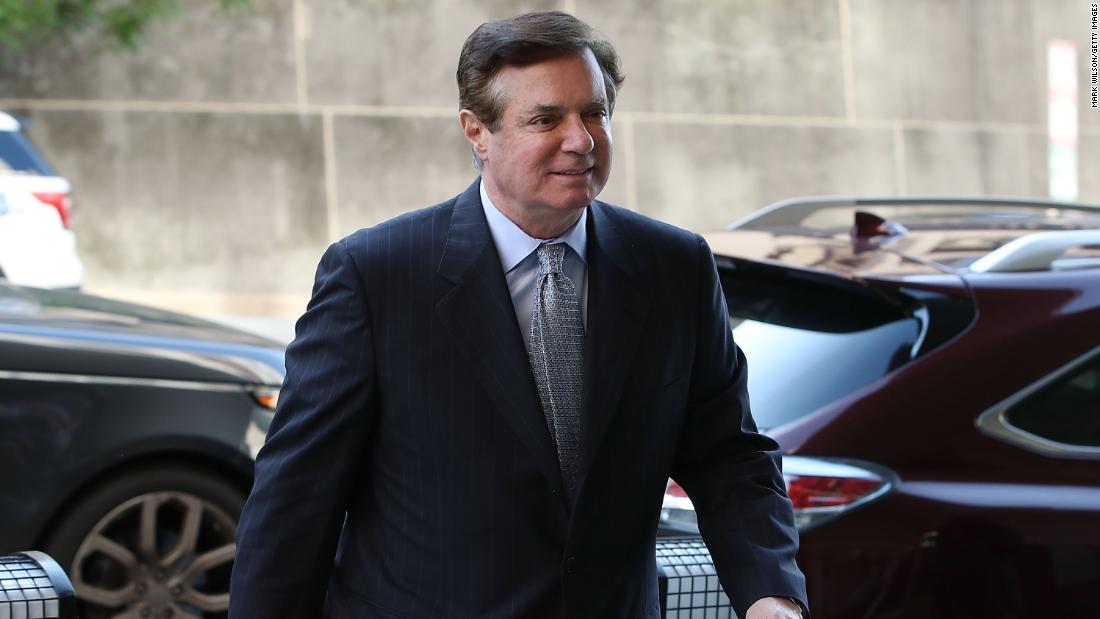 The order marked an end to almost eight months of attempts by Manafort to lighten his house arrest restrictions after he was charged and pleaded not guilty to foreign lobbying violations.

“The harm in this case is harm to the administration of justice and harm to the integrity of the court’s system,” Berman Jackson told Manafort in court.

The judge emphasized to Manafort how she could not make enough rulings to keep him from speaking improperly with witnesses, after he had used multiple text messaging apps and called a potential witness on an Italian cellphone.

“This is not middle school. I can’t take his cellphone,” she said of Manafort. “I thought about this long and hard, Mr. Manafort. I have no appetite for this.”

Manafort also entered a not guilty plea to two additional charges levied against him last week, of witness tampering and conspiracy to obstruct justice. In total, he faces seven criminal charges in DC federal court.

Three US marshals led Manafort out of the packed courtroom into the prisoner holding area immediately after the judge’s ruling. He was not placed in handcuffs. Before he disappeared through the door, he turned toward his wife and supporters and gave a stilted wave.

Minutes later, a marshal returned to give Manafort’s wife, Kathleen, still standing in the courtroom’s front row, his wallet, belt and the burgundy tie he wore Friday.

Court marshals held Manafort in the bowels of the courthouse for several hours following the hearing as they considered how to keep him protected from other inmates behind bars. He arrived about 8 p.m. at the Northern Neck Regional Jail in Warsaw, Virginia, 90 miles south of Washington.

In a tweet, President Donald Trump said the decision to revoke Manafort’s bail was “tough,” although he referred to it as a “sentence.”

“Wow, what a tough sentence for Paul Manafort, who has represented Ronald Reagan, Bob Dole and many other top political people and campaigns. Didn’t know Manafort was the head of the Mob. What about Comey and Crooked Hillary and all of the others? Very unfair!”

In her wind-up to her order, Berman Jackson also gave a brief nod to the bitter environment around the case:

‘Danger to the community’

When Manafort was first arraigned and pleaded not guilty in October, a magistrate judge set a $10 million bail price and placed him under house arrest, confiscating his passports. Manafort then attempted to find assets of his own and through real estate and family members’ accounts. In December, the judge signed off on his plan — provided he could supply the correct documentation. It didn’t come through, according to the court filings.

Prosecutors have argued all along that the jet-setting political consultant was a significant flight risk. As the process to negotiate his bail dragged on, prosecutors discovered possible mortgage fraud related to some of the properties he hoped to use as bail. That’s when they finalized additional federal criminal charges against him in Virginia.

In the past month, Manafort finally came up with a plan to post some of his own and others’ properties for his bail. The prosecutors appeared to agree with the plan, according to court filings.

On Friday, they told the judge Manafort was a “danger to the community” and that he had committed a crime while out on release: obstruction of justice.

Prosecutor Greg Andres described the following scene to the court from February 24, a day after Manafort’s co-defendant, his longtime deputy Rick Gates, flipped:

A man was driving with his wife through rural Italy when his phone rang. Manafort identified himself to the man, Alan Friedman, a public relations consultant he once worked with.

Manafort was referring to a project he and Friedman had worked on years ago to bring influential Europeans to the US to push pro-Ukrainian politics while the group posed as independent experts. The project, dubbed the Hapsburg group, was among Manafort’s efforts to skirt foreign lobbying laws, prosecutors allege.

Friedman turned down the radio as Manafort spoke, Andres said, then hung up the phone a minute and a half into the call. Manafort tried several more times to reach him in the following days.

Andres said prosecutors now know Manafort used multiple ways to communicate with former colleagues like Friedman and Konstantin Kilimnik, a Moscow-based associate who’s also charged in the alleged witness tampering: In addition to phone calls and half a dozen encrypted messaging apps, Manafort uses a system with email called “foldering,” where multiple people have access to an account and write messages to one another as drafts,but the emails are never sent.

“This was a sustained campaign over a five-week period to use multiple numbers, applications and people,” Andres said in court about the witness tampering allegations.

Manafort’s lawyer Richard Westling argued that Manafort had no way to know Friedman would be a witness in the case. Westling asked the judge to simply issue a more specific order for Manafort to follow while out on bail.

“This will not happen again,” Westling said.

But the witness tampering allegations, which also resulted in new criminal charges, were enough Friday for Manafort to lose his house arrest privileges.

He faces another 18 criminal charges for financial fraud and false reporting allegations in Virginia federal court. That case is set to go to trial earlier than the DC case, with a late July start date.

His DC trial is set to begin in September, meaning he could spend the next three or more months imprisoned.

Manafort has maintained his innocence and vowed to fight the charges since he was indicted alongside Gates in late October. Gates has since changed his plea to guilty and agreed to help prosecutors, because of the significant cost of his legal fees and attention bearing down on him and his family. Another associate of Manafort’s, Kilimnik, was charged with witness tampering and has not yet appeared in court.

Prosecutors haven’t tied Manafort, Gates and Kilimnik’s alleged wrongdoings to the actions of the Trump campaign, which is at the core of Mueller’s investigation. However, prosecutors have said in several previous court filings that they are looking into Manafort’s contacts with Russians and Ukrainians — including Kilimnik — and possible coordination he may have orchestrated with them while he oversaw the campaign.

Manafort had spent his days since October stuck in his apartment under court order. He could leave only for legal meetings, medical needs and religious observances. The judge had allowed him to travel a few times for special exceptions, such as to his father-in-law’s funeral on Long Island and his grandson’s baptism in Virginia.

He wore ankle bracelets that tracked his movements through GPS technology, one on each leg.

Leading up to Friday’s hearing, Manafort was optimistic he would avoid jail, according to a source familiar with the situation, but he and his legal team expected Mueller’s team to be as aggressive as possible.

His friends were “shellshocked” in the wake of the judge’s decision Friday, the source said.

Manafort’s new confines create another hurdle in his trial preparations and will make it more difficult for him to confer with his counsel and prepare his defense.

CLARIFICATION: This story has been updated to clarify whose baptism Manafort was permitted to attend. It was his grandson’s.

PrevPreviousGermaine Greer calls for punishment for rape to be reduced – Trending Stuff
NextOsteria FrancescanaIs the Best Restaurant in the World, Again – Trending StuffNext