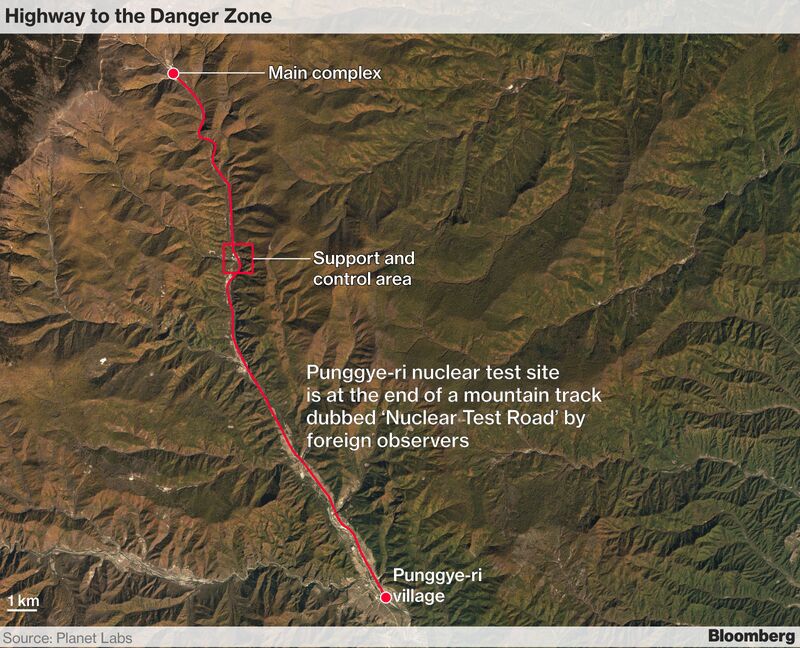 North Korea leader Kim Jong Un has promised to close his main nuclear weapons test site in May and said he will invite South Korean and American media to witness the shutdown.

Ahead of an historic meeting with U.S. President Donald Trump expected within the next three to four weeks, Kim told South Korea’s president that two tunnels at the nuclear test site are still in good condition, playing down international speculation that the site was so badly damaged by nuclear explosions that it can no longer be used. Kim’s pledges to Moon at their historic summit on Friday were detailed in Seoul on Sunday by Moon’s chief communication official.

Kim told President Moon Jae-in on the disputed Korean border that Trump will learn at their meeting that North Korea has no intention of using its nuclear arsenal toward South or the Pacific or to target the U.S. The North had no reason to own nuclear weapons if it and the U.S. promise non-aggression against each other, he said, according the the Seoul briefing.

Trump said Saturday night that he expects his historic meeting with Kim will take place “over the next three or four weeks.”

“Strength is going to keep us out of nuclear war, not get us in,” Trump told a rally in Washington, Michigan. Earlier, he said details of the summit are being ironed out, and that he’d spoken with the leaders of South Korea and Japan about preparations for the meeting.

Kim told Moon that while the U.S. has “instinctive resistance” against North Korea, it will realize that Kim “isn’t type of person who would use nuclear toward South or the Pacific or target the U.S.” Kim said he had no reason to “live in difficulties” because of his nuclear arsenal if he can build trust with the U.S., according to Moon’s spokesman.

On Friday, Trump said that the potential location of a meeting with the North Korean leader had been narrowed down to two or three locations that he didn’t specify, adding “hopefully we’re going to have great success.”

“I don’t think he’s playing,” Trump said Friday of Kim, who earlier agreed with Moon to work toward formally ending their decades-long war and pursue the “complete denuclearization” of the Korean Peninsula.

Moon’s office said Sunday that he and Trump agreed in their phone call that the U.S. president should meet with Kim as soon as possible in a bid to maintain “the momentum of the success” of Friday’s historic meeting of the Korean leaders.

“We will, I think, come up with a solution and, if we don’t, we leave the room with great respect and we just keep it going,” said Trump, speaking to reporters at the beginning of a meeting in the Oval Office with German Chancellor Angela Merkel.

Trump has said he hopes to resolve the standoff between Washington and Pyongyang over North Korea’s nuclear weapons and ballistic missile programs in what would be the first meeting between a North Korean leader and a sitting U.S. president.

South Korea had long refused to participate in talks to end the Korean War, leaving an uneasy truce between North Korea and China on one side and United Nations forces — led by the U.S. — on the other.

Although China long ago withdrew its troops, more than 28,000 American personnel remain based in South Korea, which the Kim regime views as an enduring threat.

Read More: This Is Where Kim Jong Un Tests His Nuclear Weapons

The meeting between the two Korean leaders produced unprecedented scenes, starting with Kim’s step over the ankle-high concrete slab dividing the two nations — and then his walk back across the border, hand-in-hand with Moon. Later, the leaders planted a tree and talked privately for 30 minutes with television cameras rolling.

Kim called for frequent meetings between the leaders. And he capped it off with live remarks to reporters, something no other North Korean leader had done before.

Still, it remains to be seen whether North Korea will meet Trump’s demand to give up its nuclear weapons and missiles.

One ominous sign was commentary from North Korean state-run media following the Korean leaders’ meeting calling on the U.S. to drop its “anachronistic hostile policy” and “bad manners.” It declared North Korea a “world-level politico-ideological and military power” and said it would contribute to building “a world without nuclear weapons.”

In an interview to be broadcast Sunday, new U.S. Secretary of State Mike Pompeo, who met with Kim over the Easter weekend, told ABC’s Jonathan Karl that their talks were “good conversation” about “serious matters” and Kim was “very well prepared.”

Kim is “prepared to … lay out a map that would help us achieve” denuclearization, he said. “When I left, Kim Jong Un understood the mission exactly as I described it today.” The administration’s objective is “complete, verifiable, irreversible denuclearization.”