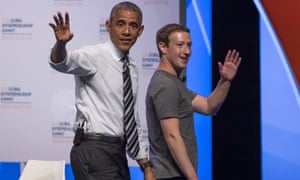 The impact of Facebooks dominance means that publications are constantly scrambling to keep up with the platforms changing strategy. The editor-in-chief of Wired, Nick Thompson, recently told the Digiday podcast that there was a fear Facebook has a dial somewhere that can be turned to cut off media that gets too uppity.

Much has been made of the fact that Facebook creates filter bubbles. It has been criticised for prioritising content that users will like meaning there is less diversity in the news stories people read and for failing to crack down on propaganda. In fact, Italys new far-right star Matteo Salvini explicitly thanked Facebook for contributing to the countrys recent election results.

All this from a company that in 2016 paid just 5.1m in corporation tax on its UK operations, despite profit and revenues nearly quadrupling on the back of increased advertising sales. In December 2017, Facebook announced it would start booking advertising revenue in countries where it was earned, instead of rerouting it via Ireland, although as this newspaper reported the move is unlikely to result in it paying much more tax. This is despite Zuckerberg calling for governments to start paying a universal basic income for every citizen as a response to automation, driven in part by Silicon Valley.

Even if we want to avoid the site and keep our data protected, its not as easy as one might think. According to Roger McNamee, an early investor in Facebook, the company uses techniques found in propaganda and casino gambling to foster psychological addiction in its users such as constant notifications and variable rewards. By keeping us hooked, Facebook is able to hold a huge amount of data on us. What is surprising, and worrying, is the derived data Facebook has the profiles it can build of its users based on seemingly innocuous information. The author of the book Networks of Control, Wolfie Christl, noted that a patent published by Facebook works out peoples commute times by using location data from mobile apps. It then uses this and other data to segregate users into social classes.

Facebooks massive data cache goes hand in hand with its acquisition of competitors. Nick Srnicek, author of Platform Capitalism, says, Facebook is acting like a classic monopoly: its buying up competitors like Instagram, its blatantly copying rivals like Snapchat, and it even has its own app, Onavo, that acts to warn them of potential threats. All of this is combined with an unchecked sweeping up of our data thats being used to build an impervious moat around its business.

If ExxonMobil attempted to insert itself into every element of our lives like this, there might be a concerted grassroots movement to curb its influence. So perhaps its time to start treating Facebook as the giant multinational corporation it is especially because people with Facebook profiles arent the companys customers: they are the product it sells to advertisers.