The Canadian prime minister presents himself as a climate hero. By promising to nationalise the Kinder Morgan pipeline, he reveals his true self 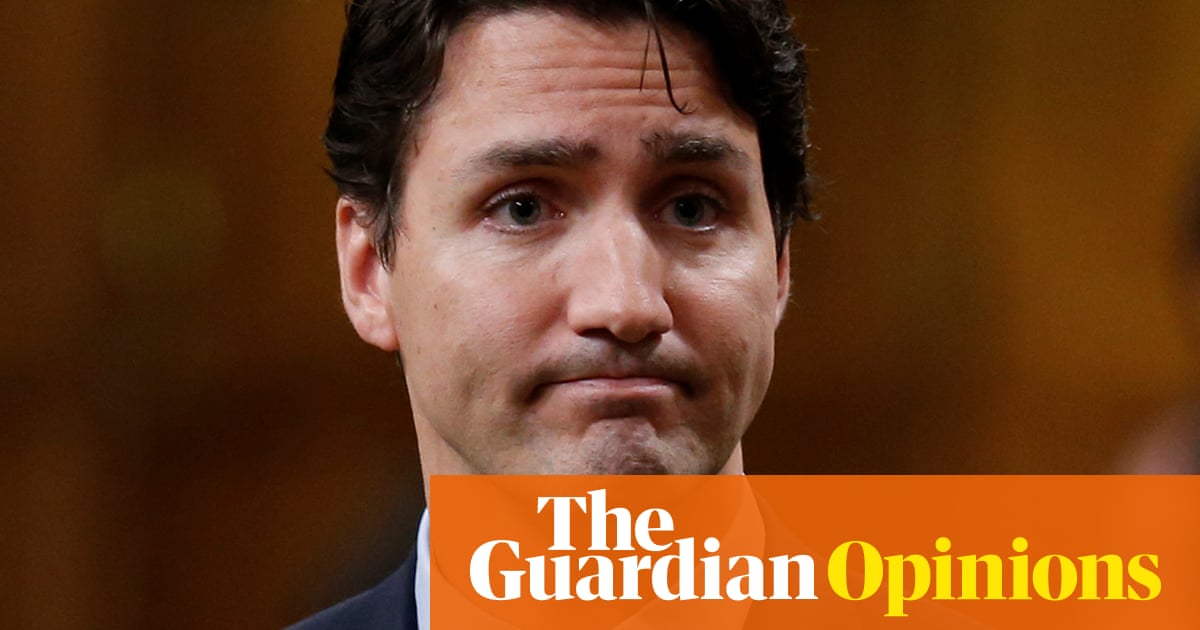 In case anyone wondered, this is how the world ends: with the cutest, progressivest, boybandiest leader in the world going fully in the tank for the oil industry.

Justin Trudeaus government announced on Tuesday that it would nationalize the Kinder Morgan pipeline running from the tar sands of Alberta to the tidewater of British Columbia. It will fork over at least $4.5bn in Canadian taxpayers money for the right to own a 60-year-old pipe that springs leaks regularly, and for the right to push through a second pipeline on the same route a proposal that has provoked strong opposition.

That opposition has come from three main sources. First are many of Canadas First Nations groups, who dont want their land used for this purpose without their permission, and who fear the effects of oil spills on the oceans and forests they depend on. Second are the residents of Canadas west coast, who dont want hundreds of additional tankers plying the narrow inlets around Vancouver on the theory that eventually theres going to be an oil spill. And third are climate scientists, who point out that even if Trudeaus pipeline doesnt spill oil into the ocean, it will spill carbon into the atmosphere.

Lots of carbon: Trudeau told oil executives last year that no country would find 173bn barrels of oil in the ground and just leave it there. Thats apparently how much he plans to dig up and burn and if hes successful, the one half of 1% of the planet that is Canadian will have awarded to itself almost one-third of the remaining carbon budget between us and the 1.5 degree rise in temperature the planet drew as a red line in Paris. Theres no way of spinning the math that makes that okay Canadians already emit more carbon per capita than Americans. Hell, than Saudi Arabians.

Is this a clever financial decision that will somehow make Canada rich? Certainly not in the long run. Cleaning up the tar sands complex in Alberta the biggest, ugliest scar on the surface of the earth is already estimated to cost more than the total revenues generated by all the oil thats come out of the ground. Meanwhile, when something goes wrong, Canada is now on the hook: when BP tarred the Gulf of Mexico, the US was at least able to exact billions of dollars in fines to help with the cleanup. Canada will get to sue itself.

No, this is simply a scared prime minister playing politics. Hes worried about the reaction in Alberta if the pipe is not built, and so he has mortgaged his credibility. His predecessor, Stephen Harper, probably would not have dared try the outcry from environmentalists and First Nations would have been too overwhelming. But Trudeau is banking on the fact that his liberal charm will soothe things over. Since hes got Trump to point to a true climate denier maybe hell get away with it.

But it seems like a bad bet to me. Faced with the same situation a revolt over the Keystone XL pipeline Barack Obama delayed for several years to avoid antagonizing either side. He ultimately decided he couldnt defend the climate cost of building it, and so became the first world leader to explicitly reject a big piece of infrastructure on global warming grounds. Trudeau has made the exact opposite call, and now well see if pipeline opponents cave.

I was in Vancouver two weeks ago to help activists raise money for lawyers, and I would guess that the civil disobedience will continue so far, two members of parliament have been arrested, an escalation weve never seen even in the States. Coast Salish elders have built a watch house along the pipeline route and, as at Standing Rock, other native activists have been pouring in Im guessing that making this petro-colonialism officially state sponsored will only harden peoples resolution. The showdown will be powerfully symbolic: kayaktivists, for instance, have paddled peacefully around the pipelines terminal, at least until Kinder Morgan put up an ugly razor wire barrier in the middle of the harbor.

Now its Trudeau who owns the razor wire, Trudeau who has to battle his own people. All in the name of pouring more carbon into the air, so he can make the oil companies back at the Alberta end of his pipe a little more money. We know now how history will remember Justin Trudeau: not as a dreamy progressive, but as one more pathetic employee of the richest, most reckless industry in the planets history.