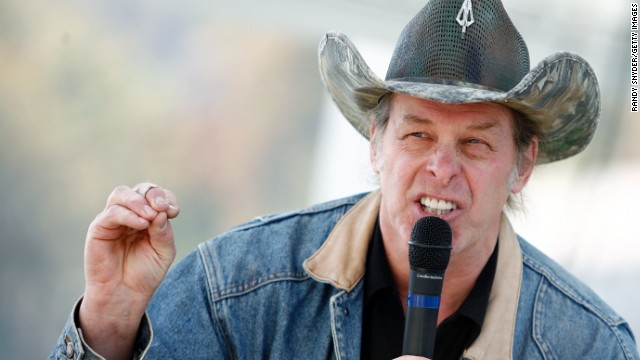 “All you have to do now is not only feel sorry for the liars, but you have to go against them and pray to God that the lies can be crushed and the liars can be silenced so that real measures can be put into place to actually save children’s lives,” Nugent said about the Marjory Stoneman Douglas High School students.

“These poor children, I’m afraid to say this and it hurts me to say this, but the evidence is irrefutable, they have no soul,” he added.

Nugent’s comments come six weeks after 17 people were gunned down at the high school, reigniting a national debate on the nation’s gun laws. An outspoken supporter of President Donald Trump, he joins a growing list of conservative pundits, commentators, and government officials who have railed against the student activists.

“The lies from the left, the lies from these poor, mushy-brained children who have been fed lies and parrot the lies, they are actually committing spiritual suicide because everything they recommend will cause more death and mayhem, guaranteed.” Nugent said.

Later in the interview, radio host Joe Pagliarulo showed him clips of survivors David Hogg and Emma Gonzalez railing against the NRA on CNN.

“The dumbing down of America is manifested in the culture deprivation of our academia that have taught these kids the lies, media that have prodded and encouraged and provided these kids lies. I really feel sorry for them because it’s not only ignorant and dangerously stupid, but it’s soulless,” Nugent said after watching the videos.

“To attack the good, law-abiding families of America when well-known, predictable murderers commit these horrors is deep in the category of soulless,” he added.

In his response, Nugent also defended the NRA.

“The level of ignorance goes beyond stupidity. Again, the National Rifle Association are a bunch of American families who have a voice to stand up for our God-given, constitutionally guaranteed right to keep and bear arms,” Nugent said.

Several Parkland survivors took to Twitter and demanded an apology.

“If only he saw all the tears. If only he had to look into the eyes I’ve looked into. If only he saw what this did to all of us,” junior Cameron Kasky tweeted. “And here the NRA is, receiving more fear-based donations than ever. Talk about ‘no soul.’ This guy better apologize. Seriously.”

Kyra Parrow, a senior, also fired back at Nugent, saying he was acting like a bully to the student survivors.

“It’s funny how the NRA argues that guns aren’t the issue, it’s bullying that is. Yet literally a NRA board member is being a 5 year old acting like a bully to me and all of the students at douglas,” she wrote.

Following the June 2017 shooting of Rep. Steve Scalise, a Louisiana Republican, and others, Nugent told a New York radio station that he would stop “the hateful rhetoric.”

“I cannot and will not and I encourage even my friends, slash, enemies on the left, in the Democrat and liberal world, that we have got to be civil to each other,” he told 77 WABC.