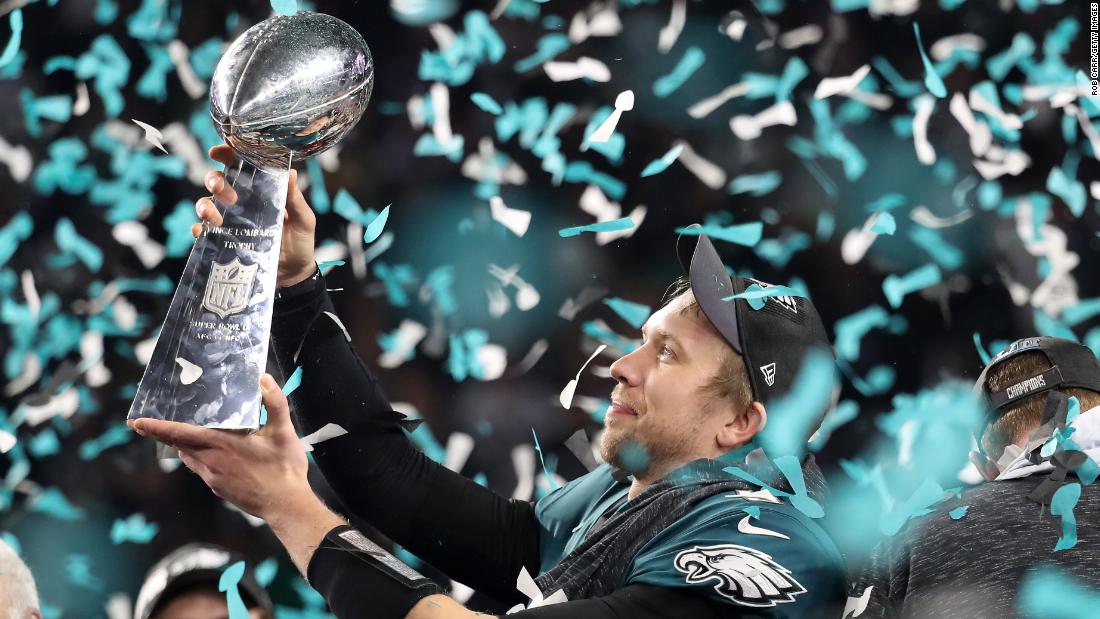 (CNN)The Super Bowl champion Philadelphia Eagles’ White House visit has been canceled due to the controversy over standing for the National Anthem at NFL games, President Donald Trump announced Monday.

It’s an unprecedented move by Trump. The NBA champion Golden State Warriors declined an invitation from the President to visit the White House after winning the 2017 championship, but presidents typically honor their invitations to championship teams. Players also have refused those invitations in the past — Boston Bruins goaltender Tim Thomas declined to visit the White House in 2012 over disagreements with President Barack Obama’s policies.

The President typically invites the champions of major professional and college sports to the White House for a visit as a part of their victory celebrations.

Last month, the NFL announced it would require athletes to stand during the National Anthem in response to players who took a knee as protest to what some players see as the systemic oppression of people of color, including by police.

The movement was initially started by Colin Kaepernick, who was formerly with the San Francisco 49ers. He drew national attention for refusing to stand during “The Star-Spangled Banner” prior to kickoff.

“I am not going to stand up to show pride in a flag for a country that oppresses black people and people of color,” Kaepernick told NFL Media in August 2016.
Trump has repeatedly criticized players for not standing for the anthem and has gone as far as to say team owners should fire players for doing so.

The new NFL policy gives players the option of remaining in the locker room during the playing of the anthem if they do not wish to comply.

Trump later tweeted, “The Philadelphia Eagles Football Team was invited to the White House. Unfortunately, only a small number of players decided to come, and we canceled the event. Staying in the Locker Room for the playing of our National Anthem is as disrespectful to our country as kneeling. Sorry!” The Eagles have not stayed in the locker room as a means of protesting the anthem.

Players on the Eagles are some of the most outspoken social justice activists in the NFL, and multiple players took part in the protests during the anthem over the last two seasons. Many players from the team were not planning on attending the ceremony as a protest of Trump, his policies and his outspoken criticism of players who chose to kneel during the anthem.

The Eagles were originally invited to the White House after their win in February’s Super Bowl over the New England Patriots. It was the first Super Bowl championship in franchise history.

In response to Trump’s announcement, former Eagles receiver Torrey Smith, who was a member of the championship team and was traded during the off-season, called the move “a cowardly act.”

“So many lies smh Here are some facts 1. Not many people were going to go 2. No one refused to go simply because Trump ‘insists’ folks stand for the anthem 3. The President continues to spread the false narrative that players are anti military,” he said in one tweet.

Smith continued: “There are a lot of people on the team that have plenty of different views. The men and women that wanted to go should’ve been able to go. It’s a cowardly act to cancel the celebration because the majority of the people don’t want to see you. To make it about the anthem is foolish.”

One player who spoke to CNN said the team had multiple meetings to discuss the invitation to the White House. Not many players wanted to go, the player said.

“The number was low,” he said.

But the issue Trump brought to the fore — players kneeling during the National Anthem — was not one of the team’s chief concerns. The player said the issue was never mentioned in the meetings.

Sen. Bob Casey, a Pennsylvania Democrat, said he’s skipping the White House event, and instead invited the team to take a tour of the US Capitol.

“I’m proud of what the @Eagles accomplished this year. I’m skipping this political stunt at the White House and just invited the Eagles to Congress. @Eagles How about a tour of the Capitol?” Casey wrote on Twitter.

Philadelphia Mayor Jim Kenney released a statement, where he said Trump’s decision “proves that our President is not a true patriot.”

“The Eagles call the birthplace of our democracy home, so it’s no surprise that this team embodies everything that makes our country and our city great. Their athletic accomplishments on the field led to an historic victory this year,” Kenney said.

“Disinviting them from the White House only proves that our President is not a true patriot, but a fragile egomaniac obsessed with crowd size and afraid of the embarrassment of throwing a party to which no one wants to attend,” he later said in the statement.

“City Hall is always open for a celebration,” he added.

Trump said in Monday’s statement that the fans are still welcome to come and partake in a “different kind of ceremony.”

“One that will honor our great country, pay tribute to the heroes who fight to protect it, and loudly and proudly play the National Anthem,” he said.

White House Director of Legislative Affairs Marc Short told CNN’s Erin Burnett he was unsure who canceled on whom.

“It’s unfortunate when politics gets in the middle of this,” Short said.