Trump is a bully who thought Canada was weak. He was wrong about us 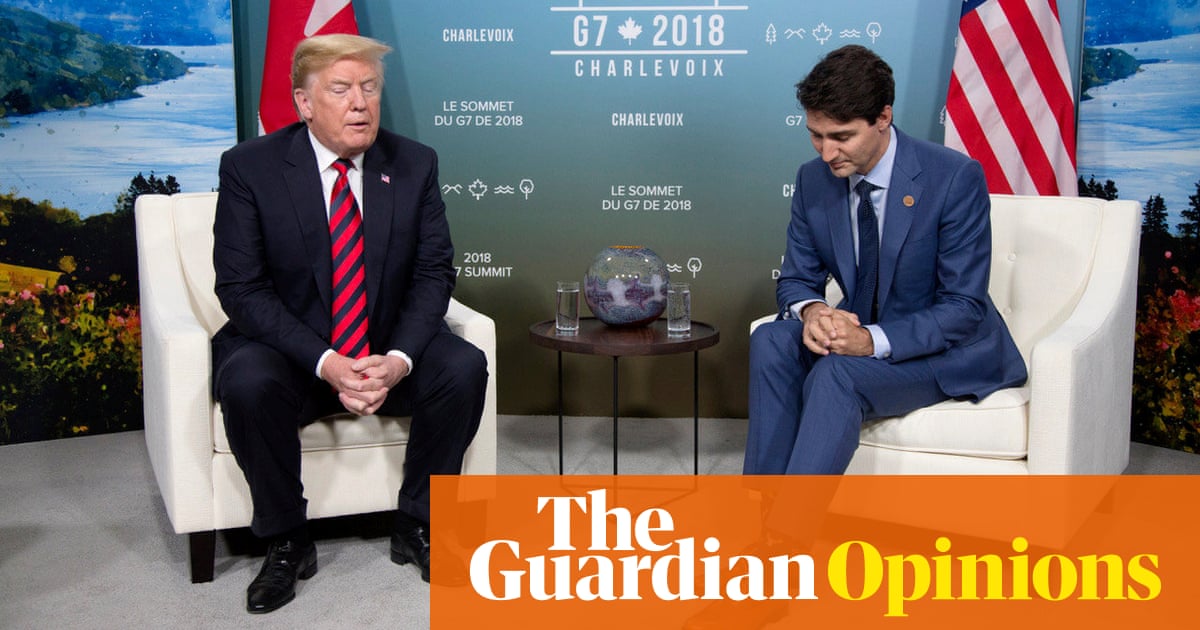 It was, by all accounts, a tense conversation over trade and the economy. The US president called the Canadian prime minister an asshole. When the prime minister learned of it, he responded: Ive been called worse things by better people.

The insult was uttered in the Oval Office in December of 1971, by Richard Nixon against Pierre Trudeau, and surely marked a low point in what has otherwise been one of the most symbiotic and friendly relationships between two neighbouring countries in modern human history.

That is, until this weekend, when Donald Trump and his lackeys took direct aim at Justin Trudeau, Pierres son.

Theres a special place in hell for any foreign leader that engages in bad faith diplomacy with President Donald J Trump and then tries to stab him in the back on the way out the door, said Peter Navarro, Trumps trade adviser, on Fox News Sunday.

What he was referring to was a stock standard press conference in which Trudeau referenced Trumps decision to impose tariffs on Canadian steel and aluminum, noted Canadians did not take it lightly, said labelling the country a national security threat was kind of insulting to Canadians who have lost daughters and sons alongside Americans in Afghanistan, and reiterated his plans for retaliatory tariffs on symbolic American products like bourbon and pickled gherkins.

It was a mild response. Canadas unwillingness to utterly cave to the demands of the Americans, however, was enough to set off a presidential temper tantrum. Trump refused to endorse the G7 communique he had just agreed to, Navarro called him bad faith Justin and relations have plummeted to their lowest point in decades.

If a nation of millions can have a collective character, then it is true what is said about Canadians. We are a stoic, rule-abiding and polite people. We are also smug, passive-aggressive and proud. If you like your maple syrup laced with piss, we will deliver cans of the stuff, painted with quaint winter scenes and sold at a mark-up with a smile.

Navarros comments seem crafted to test those traits. Trump may be a polarizing figure in the US, but he is turning out to be a great unifier of Canadians. Many of Canadas most rabidly anti-Trudeau conservatives are striking a sympathetic tone with the prime minister. Former Conservative prime minister Stephen Harper even showed up on Fox News to talk trade in support of Trudeau, saying: I dont understand the obsession with the trade relationship with Canada.

With respect to Harper, its not difficult to understand at all. Trump is a bully. Bullies pick on those they perceive to be weak. Criticizing Trudeau for seeming to be meek and mild, as Trump did, is telling language.

The problem, for Trump, is that he is wrong. Canadas population and economy may be smaller than Americas, but that does not make us weak. Trump has focused his ire on Canadian dairy, where we maintain a supply management system that keeps foreign products out of the country. Many Canadians would like to see the back of it, and Trump could have pushed Canada closer to dismantling this system as part of ongoing Nafta renegotiations.

Best of luck with that now, Mr Art of the Deal. Canadians wont consent to scrapping our supply management system if it becomes a point of national self-respect. We wont be reduced to a simpering client state. If a few years of economic hardship is the cost of our pride, so be it.

To the walls with our overpriced cheese. And make the Americans pay for it!

It is remarkable that the one thing this G7 summit has highlighted is that, in the long run, Canada cant trust or rely upon its closest and most trusted ally. We need to rapidly diversify our economy and trade partnerships.

In the meantime, Trump should take note of history. After Nixons quip, Pierre Trudeau went on to become one of Canadas most iconic prime ministers. Nixon did not fare so well.

And history seems to love a reboot.

Jen Gerson is a contributing editor for Macleans and co-host of the Canadian politics podcast Oppo.