President Donald Trump is still weighing options for U.S. military action against Syria and met with Defense Secretary Jim Mattis on Wednesday, after warning Russia on Twitter to expect a missile barrage. 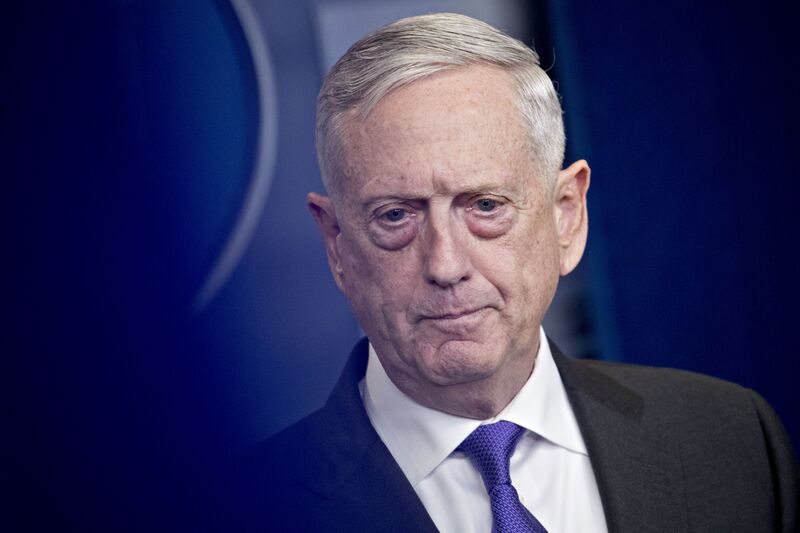 Trump has not yet settled on a plan to retaliate against Syrian President Bashar al-Assad for an alleged chemical weapons attack last weekend outside Damascus, and a U.S. strike isn’t expected Wednesday, two people familiar with the matter said.

Trump said earlier on Twitter that relations with Russia, Assad’s patron, have never been worse and warned Moscow to “get ready” for a U.S. missile strike on Syria.

“Russia vows to shoot down any and all missiles fired at Syria. Get ready Russia, because they will be coming, nice and new and ‘smart!,’” Trump wrote. “You shouldn’t be partners with a Gas Killing Animal who kills his people and enjoys it!”

The heightened Middle East tensions come as Saudi Arabia said it intercepted a ballistic missile over Riyadh and shot down two drones in another part of the country on Wednesday, in the latest attacks by pro-Iranian rebels in Yemen.

Trump’s remarks weighed on investors already concerned about war. Oil prices surged to the highest level in more than three years in New York. Turkey, which has troops in Syria, saw its currency weaken to a record, while the Borsa Istanbul 100 Index for stocks reversed gains to drop 1.3 percent. Saudi Arabia’s main stock index also extended its decline.

The U.S. relationship with Russia is “worse now than it has ever been, and that includes the Cold War,” Trump said. “There is no reason for this. Russia needs us to help with their economy, something that would be very easy to do, and we need all nations to work together. Stop the arms race?”

The White House has said that Trump would coordinate a response with French President Emmanuel Macron. Mattis, who was spotted alongside CIA Director Mike Pompeo at the White House on Wednesday, said he stands “ready to provide military options if appropriate,” while Defense Department spokesman Eric Pahon said the chemical attack “demands an immediate response from the international community.”

A strike that hits Russian assets in Syria — even if unintentionally — could result in a dangerous game of one-upmanship, potentially dragging the U.S. further into a conflict the president wants to leave. Russia has strengthened Syria’s air-defense capabilities, deploying S-400 missile batteries after U.S. struck a Syrian base a year ago.

“The risk of military conflict between Russia and the U.S. in Syria is very high,” said Elena Suponina, a Mideast analyst at the Russian Institute of Strategic Studies, which counsels the Kremlin. “If Trump takes this step and Russian citizens are harmed, the reaction will be very harsh,” she said, noting that Moscow’s threats to use its air-defenses to destroy U.S.
missiles represent an escalation from its response to last year’s U.S. strikes.

Spokesman Dmitry Peskov told reporters that Russia continues to believe allegations of a chemical weapons attack are “fictitious” and are being used as an excuse for military action.

“We don’t take part in Twitter diplomacy, we are supporters of serious approaches,” Peskov said. “We still believe that it’s important not to take steps that can harm the already fragile situation in Syria.”

Despite Trump’s harsh rhetoric, any strike is more likely to focus on the forces on the ground, the perpetrators of the alleged chemical attack — Syrian troops, Lebanese Hezbollah militants and allied Iranian-backed militias, said Sami Nader, head of the Beirut-based Levant Institute for Strategic Affairs. Even now, Nader said, there’s already “an open war with Iran involving the U.S. and Israel.”

The Syrian Observatory for Human Rights, a U.K.-based organization, said Syrian government forces were vacating airports and some key military positions in anticipation of a U.S.-led strike.

Trump’s statements on the conflict increasingly seem to contradict his repeated vow not to telegraph his military intentions, something he regularly accused then-President Barack Obama of having done.

“Why do we keep broadcasting when we are going to attack Syria,” Trump wrote on Twitter in August 2013. “Why can’t we just be quiet and, if we attack at all, catch them by surprise?

Republican Senator Rand Paul, who has long opposed U.S. involvement in Syria, said on Twitter that “promising war by tweet, insults not only the Constitution but every soldier who puts their life on the line.”

The heightened tensions in the Middle East come as

Trump is taking on Moscow at the very time that Special Counsel Robert Mueller’s investigation into his campaign’s possible ties with Russia is closing in on the president’s inner circle. Trump addressed the probe Wednesday, saying “much of the bad blood with Russia is caused by the Fake & Corrupt Russia Investigation.”

Syria’s Foreign Ministry said it was “not surprised by this arrogant escalation by a country like the United States, which has supported terrorism in Syria.” An unidentified ministry official cited by state-run TV accused the Americans of sponsoring the lies of “terrorists” as a pretext to attack Syria.

Syrian media showed Assad, in a dark suit and tie, with participants in a conference on Muslim unity in Damascus. In the footage, Assad told his guests that the unity of Muslims “will guarantee the protection of our societies against Western plots to weaken and divide us.” He didn’t mention the U.S. threats.

Trump lashed out at Russia after its ambassador to Lebanon, Alexander Zasypkin, told Hezbollah’s Al Manar TV that any rockets that threaten Russian forces “will be downed as well as the sources of those rockets.”

In March, Valery Gerasimov, chief of Russia’s General Staff, warned that “in the event a threat arises to the lives of our servicemen, the Armed Forces of Russia will take retaliatory measures against both missiles and the carriers that use them.”

Eurocontrol, a European air traffic agency, asked airlines to apply caution on flights to the eastern Mediterranean region because of possible air strikes in Syria over the next 72 hours.

Former Secretary of State Madeleine Albright told CNN on Wednesday that while there is “no question” Putin is culpable, she’s concerned there is no strategy.

“It is one thing to take action about this really egregious issue of this chemical attack,” Albright said. “We need a strategy of some kind and I hope there is work going on on that.”

This is the second time in about a year that the U.S. is gearing to respond militarily in Syria. This time, Trump is under pressure to hit harder and take bigger risks than the attack last year, which was limited to a single Syrian base and left little lasting damage.

“It’s unlikely that another set of one-off strikes will deter Assad,” said Jennifer Cafarella, a Syria analyst at the Institute for the Study of War in Washington. Trump needs to “establish a more effective deterrent by inflicting greater costs on Assad and perhaps his backers.”

The prospect of direct participation by France — and possibly other allies such as the U.K. and Saudi Arabia — would provide greater legitimacy for a large operation that otherwise would risk criticism as violating international law, said Andrew Bell, an assistant professor at Indiana University who focuses on international security and the law of armed conflict. A broader coalition helps build the case for a humanitarian mandate, he said.

A more forcible response, however, could upset the delicate balance of groups operating in the country. The situation on the ground is a patchwork of competing and loosely aligned interests, including Russia, Iran, Turkey and the U.S., which has about 2,000 troops there advising the Syrian Democratic Forces in a fight against Islamic State militants.