The Pentagon said missile strikes on Syria have hampered Bashar al-Assad’s ability to use chemical weapons again, without encountering serious resistance from the Syrian military or its Russian allies.

The tweet was an echo of predecessor George W. Bush, who, speaking on an aircraft carrier in front of a banner with those words displayed, prematurely pronounced an end to America’s combat operations in Iraq two months after the 2003 invasion — a claim that proved premature, and that shadowed his presidency. The U.S. military didn’t leave Iraq for several more years, and it’s back there now.

And the limited nature of the strikes by the U.S., U.K. and France means they probably won’t have an immediate impact on the balance of power in Syria’s years-long civil war. The conflict, which has killed about half a million people, is increasingly drawing in regional and world powers — and threatening to escalate.

America’s involvement may not be over, said Trump’s ambassador to the United Nations, Nikki Haley. She said the U.S. is “locked and loaded,” and ready to punish Syria again if it keeps using chemical weapons. 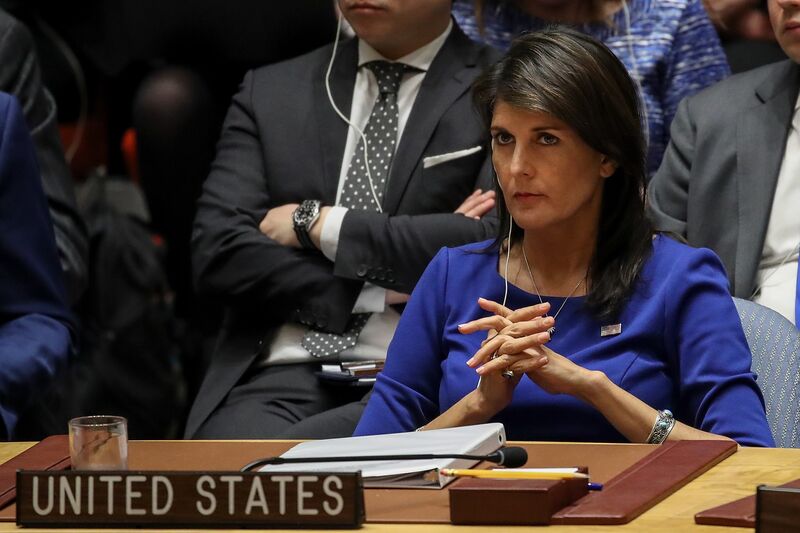 Vice President Mike Pence, at the Summit of the Americas in Lima, said the move had been “morally right,” and that the U.S. is prepared to “sustain” its efforts against the use of chemical weapons.

Trump and top aides, in consultation with leaders of France and the U.K., had become concerned that not responding to this month’s attack on Douma, which came on the heels of a nerve agent poisoning in England of a former Russian spy in March, may normalize the proliferation of chemical weapons around the world, said two administration officials who asked not to be identified to discuss the deliberations.

Syria and its backers called the attack a violation of international law, and the UN Security Council held an emergency meeting Saturday at Russia’s request at which it rejected Moscow’s resolution to condemn the strikes. Yet the pushback was limited to words, after several days in which brinkmanship on both sides had raised the prospect of a direct clash between two nuclear powers. The UN Secretary-General had called the situation potentially more dangerous than the Cold War. 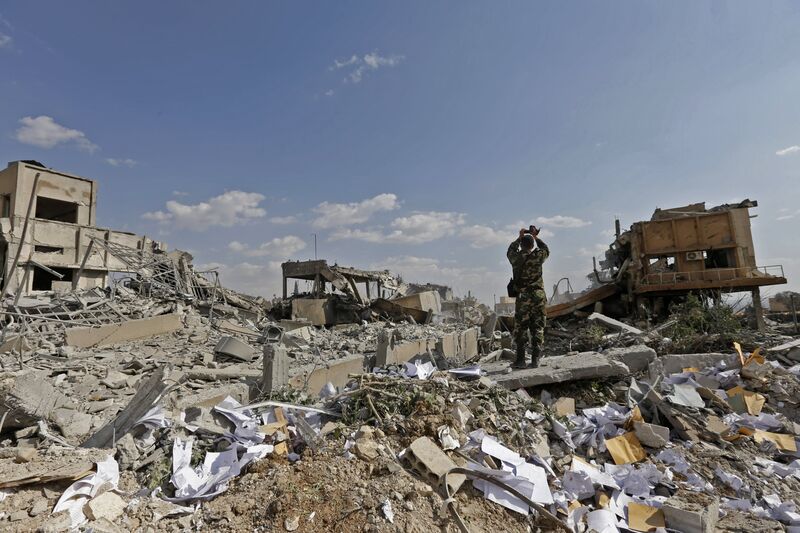 The U.S. said that 105 missiles were fired against three targets in Syria, including chlorine and sarin gas research facilities, and that Assad’s capacity for chemical warfare had been “significantly degraded.” Lieutenant General Kenneth McKenzie, director of joint staff at the Pentagon, called it a “proportional, precision” attack.

McKenzie told reporters on Saturday that none of the missiles were shot down, and there was no indication that Russian air defenses stationed in Syria were used. Russian General Sergei Rudskoi said earlier that Syrian systems had intercepted about two-thirds of the missiles. The U.K.-based Syrian Observatory for Human Rights, an anti-Assad group with networks of observers inside the country, said some missiles had been intercepted while others “caused great material damage,” though no casualties had been reported. 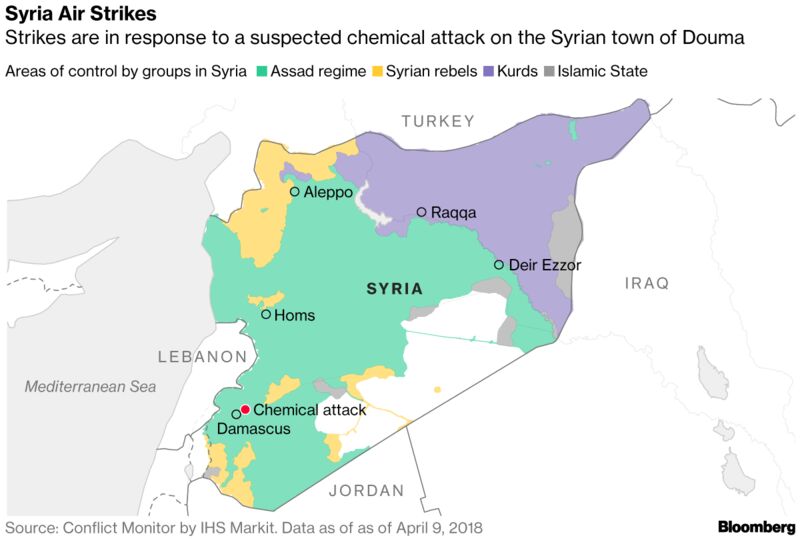 On the ground in Syria, armed forces liberated Eastern Ghouta after driving out the remaining armed groups from Douma, the Al Mayadeen television network reported, citing a statement by the Syrian Army.

In his tweet on Saturday, Trump called the strike “perfectly executed.” His allies defended an action carried out without a UN mandate, and before inspectors from the global body that monitors chemical weapons had a chance to visit the site of the alleged attack. All three countries involved in the overnight strikes said they were satisfied with evidence pointing to Assad’s responsibility.

“We would have preferred an alternative path, but in this case there was none,’’ U.K. Prime Minister Theresa May told reporters in London. “We cannot allow the use of chemical weapons to become normalized.” Russia has accused U.K. intelligence services of staging the chemical attack as a pretext for intervention. 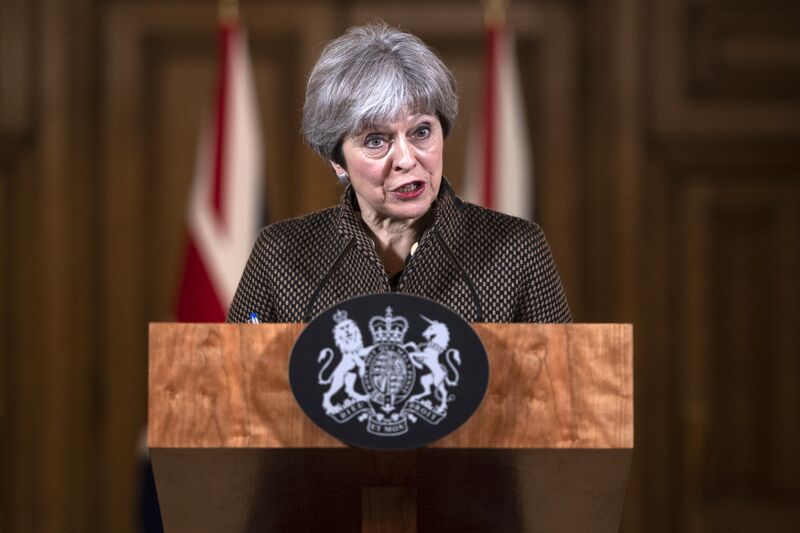 In the U.S. and U.K., there were signs of domestic opposition. Some Democrats in Washington said that Trump had no Congressional mandate for any attack, while Republican Senator Lindsey Graham criticized its limited scope, saying that “when the dust settles this strike will be seen as a weak military response and Assad will have paid a small price for using chemical weapons yet again.”

British opposition leader Jeremy Corbyn called the strikes “legally questionable” and said that May had “trailed after Donald Trump” by involving the U.K.

President Vladimir Putin called the airstrikes “an act of aggression against a sovereign state that is on the front line in the fight against terrorism,” and a breach of international law. Iran’s Supreme Leader Ali Khamenei said the attacks were a “crime,’’ while China objected to the use of force.

While Russia wasn’t specifically informed of targets in advance, channels of communication used for “deconfliction” were employed, according to U.S. officials. Amid the escalating tensions of the past week, Russian officials had warned that they could shoot at U.S. ships or planes used to launch strikes, while Trump had threatened to send missiles raining down anyway.

Three Centuries of Trying to Stop the Poison Bomb: a QuickTake

Kamran Bokhari, a senior fellow with the Center for Global Policy in Washington, said the strikes appeared intended to avoid provoking Russia. “Russia probably got an assurance that these strikes would only target the CW capability of the regime,” he said, referring to chemical weapons.

Officials in Moscow said no serious damage had been inflicted. General Sergei Rudskoi said two sites linked to Syria’s chemical weapons program were partly destroyed, but he said they have long been out of use and had no personnel or equipment. Syria says it eliminated its chemical weapons under a 2013 deal brokered by Russia and the U.S. 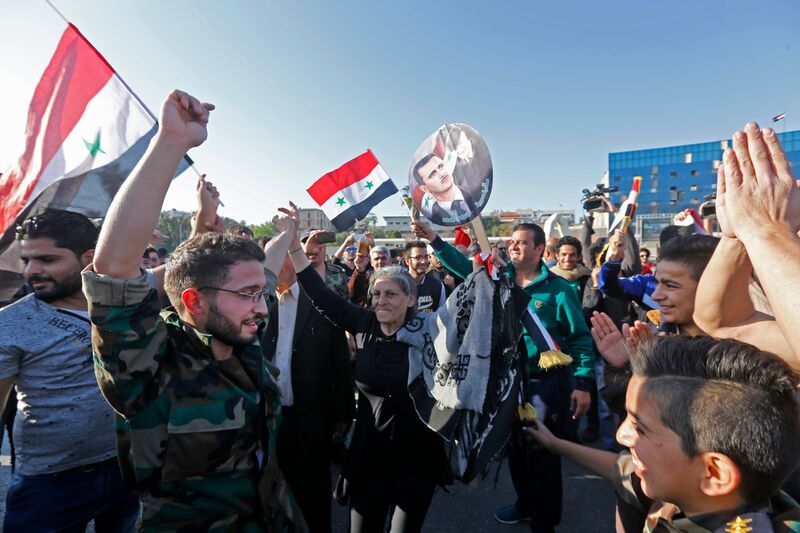 In Damascus, a capital accustomed to nighttime explosions, there was little sense of a momentous shift in the war’s course. It seemed like a fairly ordinary Saturday, except for small rallies in praise of Assad that formed in traffic circles and around fountains. Nationalist songs were played and people waved flags.

In a televised statement late Friday, Trump accused Assad of “the mass murder of innocent men, women and children,” and blasted Russian and Iran for supporting him. “The nations of the world can be judged by the friends they keep,” he said.

Trump’s decision to order an attack on Syria came days after he’d promised to pull U.S. troops out of the country altogether. Some 2,000 American troops occupy an energy-rich area of eastern Syria, where they’ve been fighting the now largely defeated Islamic State. Many Trump critics, and some of his allies, say bringing them home now would play into the hands of America’s enemies.

Trump reiterated on Friday that he wants to withdraw, without setting a timeline. “America does not seek an indefinite presence in Syria,” he said. “As other nations step up their contributions, we look forward to the day when we can bring our warriors home.”

Then came his “Mission Accomplished” moment — and Ari Fleischer, who was Bush’s press secretary at the time of the Iraq war, pounced on it.