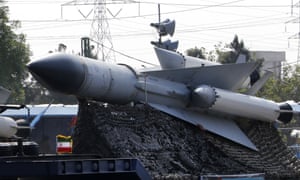 Of particular interest is a meeting involving the US presidents eldest son, Donald Trump Jr, his brother-in-law Jared Kushner and then-campaign chair Paul Manafort and a Kremlin-connected Russian lawyer who had promised damaging information about Clinton.

Trump has repeatedly signalled his intention to scrap the Iran deal, denouncing it as the worst deal ever. In a January speech the US president accused his predecessor of having curried favour with the Iranian regime in order to push through the disastrously flawed Iran nuclear deal.

Last Monday, Netanyahu, accused Iran of continuing to hide and expand its nuclear weapons know-how after the 2015 deal, presenting what he claimed was new and conclusive proof of violations.

However, European powers including Britain responded by saying the Israeli prime ministers claims reinforced the need to keep the deal.

On Thursday the UN secretary general Antonio Guterres urged Trump not to walk away from the deal, warning that there was a real risk of war if the 2015 agreement was not preserved. The following day details emerged of some unusual shadow diplomacy by Kerry, meeting a top-ranking Iranian official in New York to discuss how to preserve the deal.

It was the second time in around two months that Kerry had met foreign minister Javad Zarif to apparently strategise over rescuing a pact they spent years negotiating during the Obama administration. On Sunday Boris Johnson, the foreign secretary, will arrive in Washington, hoping to persuade Trump to keep the deal, known as the joint comprehensive plan of action (JCPOA).

Straw, who was foreign secretary between 2001 and 2006, said: The campaign against the JCPOA has been characterised by abuse and misinformation. It is the best chance of ensuring Iran never develops a nuclear weapons programme, and it is insane to suggest abandoning the deal could do anything but endanger international security.