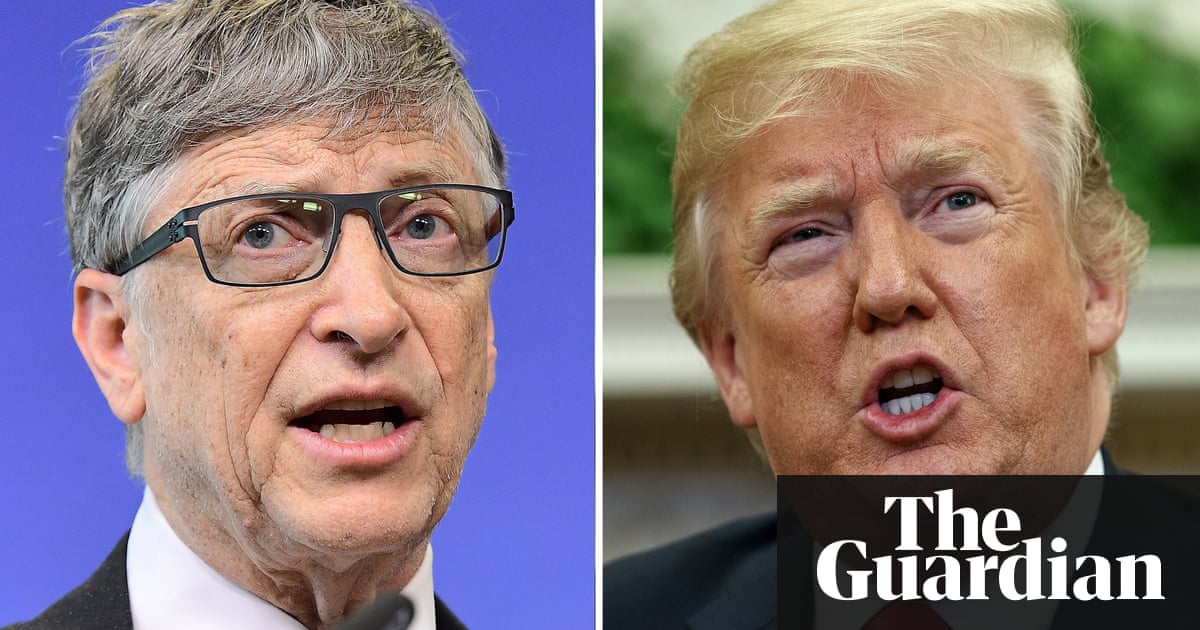 Bill Gates, the billionaire entrepreneur and philanthropist, has claimed Donald Trump twice asked him the difference between HIV and HPV and knew a scary amount about Gatess daughters looks.

The remarks were recorded at a recent Bill & Melinda Gates Foundation meeting, where Gates took questions from staff, according to MSNBCs All in with Chris Hayes show, which broadcast the footage on Thursday.

Gates told the audience how Trump had encountered his daughter Jennifer, now 22, at a horse show in Florida. And then about 20 minutes later he flew in on a helicopter to the same place, the Microsoft co-founder said. So clearly he had been driven away but he wanted to make a grand entrance in a helicopter.

Gates himself met Trump for the first time in New York in December 2016, he recalled: So when I first talked to him it was actually kind of scary how much he knew about my daughters appearance. Melinda [Gatess wife] didnt like that too well.

They met again in March last year at the White House. Gates continued: In both of those two meetings, he asked me if vaccines werent a bad thing because he was considering a commission to look into ill-effects of vaccines and somebody I think it was Robert Kennedy Jr was advising him that vaccines were causing bad things. And I said no, thats a dead end, that would be a bad thing, dont do that.

Both times he wanted to know if there was a difference between HIV and HPV so I was able to explain that those are rarely confused with each other.

Trump since appears to have abandoned plans to investigate debunked theories linking childhood immunisations and autism. Robert F Kennedy Jr told the Guardian earlier this year that parents and childrens health advocates felt enormous betrayal and disappointment at the decision.

The UKs National Health Service website lists Whats the difference between HPV and HIV? as one of its common health questions. It says: Human papilloma virus (HPV) affects the skin and moist membranes. HPV can cause problems such as verrucas, genital warts and abnormal cell changes in the cervix.

Human immunodeficiency virus (HIV) attacks the immune system. HIV infection can lead to Aids; however, with early diagnosis and treatment, most people dont go on to develop Aids.

Gates is hardly known for his comic timing but he frequently prompted laughter from the audience at the foundation event. In one anecdote he said: When I walked in, his first sentence kind of threw me off. He said: Trump hears that you dont like what Trump is doing. And I thought, Wow, but youre Trump. I didnt know the third-party form was always expected. Gates says that Gates knows that youre not doing things right.

Trump has a now-familiar verbal tic of referring to himself in the third person.

Hayes said his show had sought comment from the Gates Foundation but has not yet received a response. Tara Dowdell, Democratic strategist, told the MSNBC host: Were looking at a president that doesnt know the difference between HIV and HPV but he has memorised Bill Gates daughters appearance.

So if he spent more time actually learning policy, if he devoted just a quarter of the time that he devotes to harassing women and gawking at women to actual policy, memorising and learning policy, I think the country would be a lot better off.