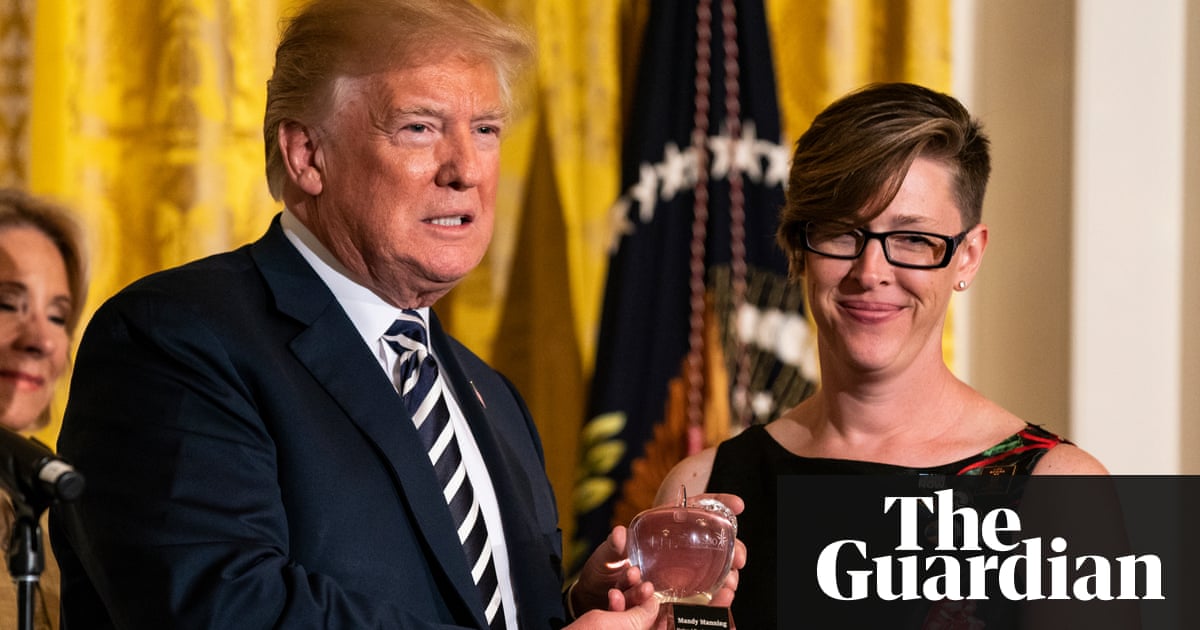 A teacher who leads a classroom for teenage refugees staged a silent protest by wearing several overtly political badges while receiving an award from Donald Trump at the White House.

Trump presented her with the National Teacher of the Year award in the East Room and praised her incredible devotion. The US president said: Teachers like Mandy play a vital role in the wellbeing of our children, the strength of our communities and the success of our nation.

Manning wore six badges on her black dress. According to a pooled report, they included one with a poster for the Womens March that followed Trumps inauguration, one that said Trans Equality Now and one in the shape of an apple with a rainbow.

The badges also represented the teacher of the year programme, National Education Association and Peace Corps, where she began her teaching career.

Handing her the clear glass, apple-shaped award on a podium, Trump did not appear to notice the badges. He smiled as he and Manning posed for photographers. The education secretary, Betsy DeVos; the labor secretary, Alex Acosta; and the Peace Corps director, Jody Olsen, looked on.

Manning told the Associated Press after the ceremony that she used a private moment with Trump to give him stacks of letters written by her students and members of the Spokane community. She said she told Trump she hoped he would read them, and she encouraged him to visit her school.

I just had a very, very brief moment so I made it clear that the students that I teach … are dedicated and focused, Manning said in an interview. They make the United States the beautiful place that it is.

Manning said the letters conveyed important messages about what coming to the US meant to the immigrants and refugees.

The long-running annual event took place against the backdrop of teachers strikes in Arizona, Colorado, Kentucky, Oklahoma and West Virginia amid complaints over stagnant pay.

Trump has cracked down on both legal and illegal immigration and suspended the US refugee programme for a period. He has demanded that a wall be built on the Mexican border to keep out murderers, drugs gangs and other criminals.