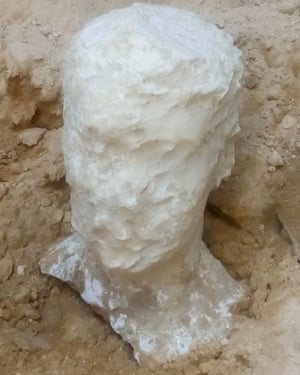 The sarcophagus, discovered during construction work, has become a source of excitement for archaeologists because a layer of mortar between the body and the lid indicates its contents have lain undisturbed since it was buried.

It is believed to be from the early Ptolemaic period, which began after the death of Alexander the Great in 323BC.

We are hoping this tomb may belong to one of the high dignitaries of the period, said Ayman Ashmawy, the head of ancient Egyptian artefacts at the Egypts ministry of antiquities. The alabaster head is likely that of a nobleman in Alexandria. When we open the sarcophagus, we hope to find objects inside that are intact, which will help us to identify this person and their position.

But opening it for the first time will require extensive work to be done in advance. Its risky to open it directly we need to prepare, said Ashmawy, explaining that the sarcophagus would be opened on site.

Its difficult to move it intact and open [it] in a museum, he said. Its five metres underground and the whole thing weighs over 30 tonnes. The lid alone is 15 tonnes.

In the coming weeks, a team of engineers will visit the site to provide heavy lifting equipment and structural supports to allow archeologists to remove the sarcophagus lid. Once inside, mummification and restoration specialists will be on hand to ensure the contents, exposed for the first time in millennia, are preserved.