Secretary of states resignation followed by two other Brexit ministers, forcing a reshuffle 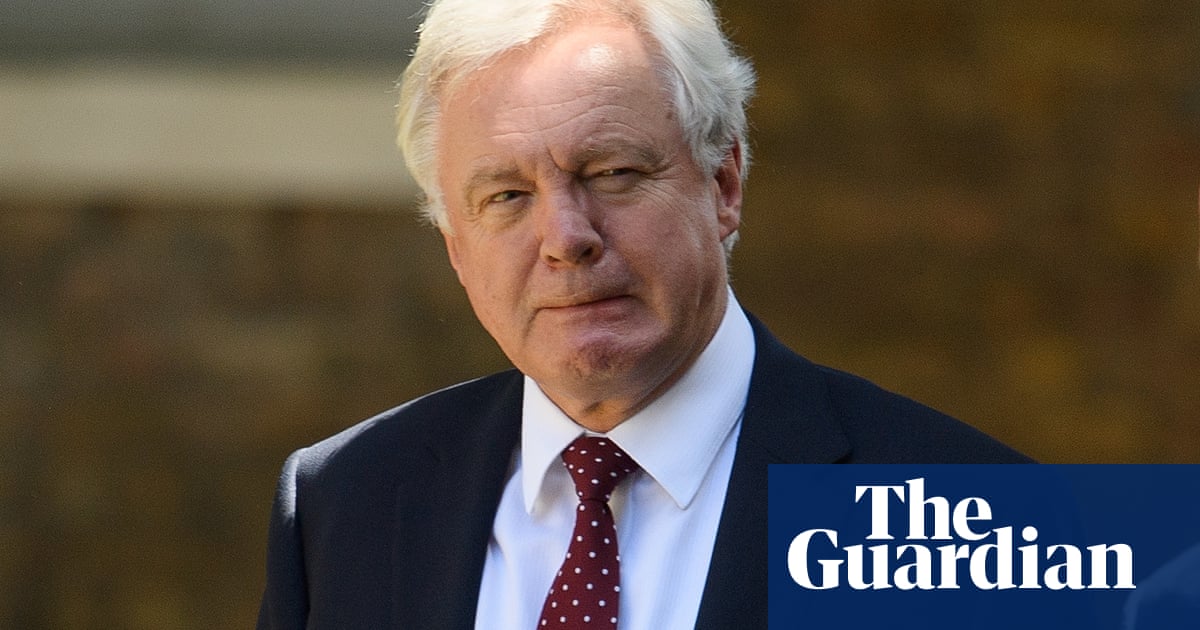 David Davis has resigned as Brexit secretary, shattering the hard-won consensus around Theresa Mays Chequers deal and plunging her government into crisis.

His resignation was swiftly followed by that of fellow Department for Exiting the EU minister Steve Baker. It forces May to reshuffle her government, at the same time as trying to convince backbenchers to support her plan.

Davis sent a bluntly worded resignation letter to the prime minister, saying he would not be a reluctant conscript to the plan agreed at Chequers, which he said was certainly not returning control of our laws in any real sense.

Davis has told friends he cannot live with the soft Brexit stance agreed between ministers on Friday, which proposes a UK-EU free trade area, governed by a common rule book.

Davis is said to have been livid about hostile briefing from senior figures in Downing Street about how Brexiters would be treated at Chequers including suggestions they would be given the number of a local taxi firm if they chose to resign.

May will now have to confront furious pro-Brexit MPs in parliament on Monday, knowing she has lost the backing of one of the leavers champions in government.

Downing Street was publicly bullish on Monday, with a source saying the mini-reshuffle to replace Davis and Baker would begin from 9am. The source said: We have a plan agreed at Chequers, as the PM says in her letter to David Davis, and we are moving forward.

The prime minister is facing a growing backlash from the pro-Brexit wing of her party, with MPs warning they are prepared to trigger a leadership contest.

If at least 48 MPs send letters to Sir Graham Brady, the chair of the powerful backbench 1922 Committee, he would have to call a vote of no confidence though many of Mays supporters in the parliamentary party believe she could win it.

Dozens of Tory MPs have attended emergency briefings in Downing Street since the Chequers summit on Friday, at which Boris Johnson said that colleagues would be polishing a turd if they tried to defend the plans to the party and public.

The pro-Brexit Conservative MP Andrea Jenkyns said it was time for May to be replaced. Honestly, I think yes, she told BBC Radio 4s Today programme.

The time has come that we need a Brexiteer prime minister, really somebody who clearly believes in Brexit and is really prepared to deliver what the people voted for.

Her fellow Tory MPs need to think long and hard over the next few days, Jenkyns added.

Davis had clashed with May on several occasions in recent weeks, including over when the long-awaited white paper setting out the governments Brexit position should be published.

He would prefer a much looser, Canada-style relationship with the EU27 after Brexit a proposal rejected by the cabinet on Friday.

In her reply to Daviss resignation letter, the prime minister emphasised he had quit when we are only eight months from the date set in law for the UK to leave the EU. She rejected his characterisation that the policy agreed at Chequers on Friday would not bring powers back from Brussels to Britain.

Jacob Rees-Mogg, leader of the powerful European Research Group faction, told BBC Radio 5 Live that Daviss resignation should force May to reconsider her approach. Without his imprimatur, it will be very difficult for them [Mays Brexit proposals] to get the support of Conservative MPs and therefore the prime minister would be well advised to reconsider them, he said.

He told Reuters the resignation was crucially important because it showed the extent of concerns about the Chequers agreement. If the Brexit secretary could not support them they cannot genuinely be delivering Brexit, he said.

The pro-Brexit MP earlier wrote in the Daily Telegraph: If the proposals are as they currently appear, I will vote against them, and others may well do the same.

Labour capitalised on the turmoil in Tory ranks. Jeremy Corbyn questioned whether May could still cling on to power, while the shadow foreign secretary, Emily Thornberry, released a tally of Tory resignations since autumn.

Before Sunday nights ructions, May was set to tell the Commons: In the two years since the referendum result we have had a spirited national debate, with robust views echoing round the cabinet table as they have on breakfast tables up and down our country. Over that time, I have listened to every possible idea and every possible version of Brexit. This is the right Brexit.

The prime minister also plans a fresh round of high-level diplomacy this week, in a bid to persuade the EU27 not to reject her plan outright.

She is expected to talk directly to European leaders including the German chancellor, Angela Merkel, and the French president, Emmanuel Macron

Some pro-Brexit MPs fear the prime ministers plan will be regarded as an opening salvo by Brussels and she will be forced to make further concessions, possibly on free movement, before the next crunch summit in October.

Michel Barnier, the EUs chief Brexit negotiator, has said the EU is ready to adapt its offer should the UKs red lines change. However, May has agreed to ramp up preparations for a no deal Brexit in case Brussels which described her previous customs proposals as magical thinking rejects them.

One senior Tory said that the government would have to take a couple more steps towards the EUs position before a final deal was struck, even if it meant Brexiters swallowing more bitter pills. Behind the scenes theres a recognition that there needs to be a bit more movement on both sides, he said.

However, a No 10 source said: Yes its a negotiation, but this isnt about making concessions, this is about challenging the EU. Its a good, pragmatic, workable solution that benefits all our economies and also our citizens. Its time for Europe to get serious.

However, May will need to get her proposals past the party first. She will make a statement to the Commons on Monday before facing a fractious meeting of the backbench 1922 committee in the evening.

Michael Gove, who is understood to have been instrumental in getting the leave-supporting cabinet on board with the proposals, urged pro-Brexit MPs to rally behind May on Sunday.

The leading Brexiter said the deal the prime minister achieved at Chequers was not everything he had hoped for, but it honoured the result of the referendum and the cabinet was behind it, meaning that collective responsibility would prevail.

Those of us who believe that we want to execute a proper Brexit and one that is the best deal for Britain, have an opportunity now to get behind the prime minister in order to negotiate that deal, he told the BBCs Andrew Marr Show.

We achieved all of the things that we campaigned for in order to ensure we could leave the EU, but we also do so in a way which respects some of the wishes and some of the concerns of some of my colleagues that voted remain.

Tory MP Andrea Jenkyns said she would 100% submit a letter to the backbench 1922 Committee to trigger a contest. Id put the letter in if these red lines were severely watered down and we had one foot in, one foot out, she said.

Andrew Bridgen, the MP for North West Leicestershire, added: I cant support the offer which emerged at Chequers I think its a breach of the red lines Obviously if the government and the prime minister continue to support that very poor offer then I wont have any confidence in [them] .

One senior pro-Brexit source told the Guardian: Its terminal. We think this is going to lead to a bigger split than Maastricht, on a more serious issue, with a smaller majority, and its not Tony Blair that lies on the other side of all of this, its Jeremy Corbyn. We think its an absolute disaster.

Most remain-supporting MPs welcomed the proposals as a sensible starting point, adding that the devil was in the detail of the Brexit white paper, although former minister Phillip Lee, who quit over Brexit, said it represented an attempt to find the least worst option that was not in the best interests of the country.