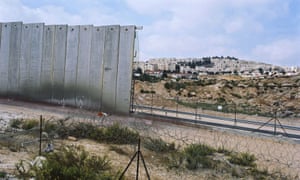 Zoabi said the PLO had forsaken its responsibilities to the Palestinian people. After formally committing to two separate states in 1988, she said, the PLO effectively conceded Israel as a Jewish state, with inequality between Jews and non-Jews enshrined in its laws. It was now mainly the Palestinian citizens of Israel who really challenged Zionism itself, she said, by insisting that the state could not truly be both democratic and Jewish. As a result, Palestinian citizens of Israel had become a much bigger threat to Israel than the PLO. She continued: The PLO defined our struggle the struggle of Palestinian citizens for equality as an internal Israeli issue. They abandoned us!

Zoabi harshly criticized the Palestinian leadership for its role in prolonging the occupation. She blamed Mahmoud Abbas, the PLO chairman and PA president also known as Abu Mazen, for the fact that the US president Donald Trump had decided to break with decades of US policy and recognise Jerusalem as Israels capital last December. Trump made a calculation, she told me. What will be the reaction to my move? All of Israel and the US said to him, correctly, that Abu Mazen will not change the rules of the game, will not end security cooperation with Israel, and will not stop Oslo. So what price will Israel or the US pay? Zoabi said that when she travelled abroad, to countries such as Ireland, Germany and the US, officials there told me: The PLO ambassador is against your position on BDS. So who am I supposed to believe?

Like the PLO, Zoabi is highly critical of Israels occupation, but she believes the real roots of the conflict are in Israels historic treatment of Palestinians. The problem is not the occupation, the problem is the Zionist project, she said. Israel fears that if people had open minds and saw what Israel was doing to the Palestinians, it would be the end. The minute you say that Israel is not a normal state that it is not a democratic state that makes some mistakes, but an abnormal state, acting against human rights then you are breaking its image as liberal, humane, [with] the most moral army in the world. BDS is eroding Israels standing.

Despite their totally opposing goals, the Israeli right and the leaders of the BDS movement agree on quite a lot. Both assert that at its heart the Israeli-Palestinian conflict is over Zionism and the forced exile of the majority of Palestinians in 1948, not Israels 1967 conquest of Gaza, East Jerusalem and the rest of the West Bank. Both contend that the settlements should not be treated differently from the government that created them. Both believe that the demands of Palestinian citizens of Israel for equality and of refugees for return are central issues of dispute, which were given insufficient attention by past peacemakers. Both say that Israels battle against BDS is not primarily an economic struggle. Both view the BDS movement as representative of mainstream Palestinian demands, despite acknowledging that the movement cannot mobilise large crowds and its main activists are not important figures in Palestinian politics. And both believe that the BDS movement will expose the true nature of the conflict to the world.

But whereas the BDS movement is betting that this exposure will lead people to conclude that Zionism is fundamentally racist and should be rejected, Kuperwasser, for one, is convinced it is the Palestinians who will be unmasked. The Palestinians are taking a very big risk, he said. Because, in my mind, there is a good chance that the world will deny their conceptual framework. People will say: This is what the Palestinians want?! We are totally against it They are crazy; they want Israel to disappear. If that happens, he added, the Palestinians wont even get a West Bank-Gaza state, which he believes the PLO still sees as merely the first stage toward liberating all of Palestine.

In Kuperwassers view, the BDS movement and the Palestinian leadership share the same goals; the differences between them are merely a matter of tactics. Abu Mazen understands more than the BDS movement that you have to be subtle, he said. The PLOs acceptance of a two-state solution, its vows to take into account Israels demographic concerns, its silence on the rights of Palestinian citizens of Israel all of these, Kuperwasser added, were merely a subterfuge designed to obtain a West Bank-Gaza state, which would then serve as a launching pad for continued struggle. The Palestinian idea of struggle is so deeply embedded in their mind that they cannot actually think about the possibility of giving up the struggle in order to make peace. I cannot tell you how many Palestinians I told, Listen, with this struggle, you are paying the price much more than we do. We are flourishing. Even if we pay a price, we are flourishing.

The key for Israel, he said, was winning the hearts and minds of centrist liberals and progressives abroad, not people who are already in the Zionist or anti-Zionist camps. What had made it more difficult, he said, was that some Israelis and Jews were guilty of negligence and intentional giving up of the battlefield not the radical left, but centrists who had naively adopted the language of the enemy. Kuperwasser singled out the former Labor party prime minister Ehud Barak, who had repeatedly warned that Israel is on a slippery slope toward apartheid a warning that has also been made by the former foreign minister Tzipi Livni and the former prime ministers Ehud Olmert and Yitzhak Rabin. For Kuperwasser, these statements, intended to convince Israelis to make territorial concessions for peace, were above all a gift to its enemies.

For the BDS movement, the charge of apartheid, which became prominent after the start of the second intifada in 2000, was not merely a provocative analogy to South Africa but a legal claim, based on the crime of apartheid as defined in international conventions and the founding statute of the international criminal court: an institutionalised regime of systematic oppression and domination by one racial group over any other racial group or groups and committed with the intention of maintaining that regime.

The concept of apartheid became central to the BDS movements framing of the conflict. Whereas the Palestinian Authority sought to accentuate its autonomy and state-like characteristics, the BDS movement underlined the PAs subservience to Israel. For proponents of the two-state model, the PA was a nationalist project working toward eventual independence, while in the apartheid framework it was merely an Israeli satrap. BDS leaders emphasised the de facto one-state reality of Israel-Palestine which had become a common trope even among Israels supporters, many of whom were dismayed at the possibility that the country could eventually be forced to enfranchise the Palestinians living under occupation and thereby cease to be a Jewish state.

Increasingly among both Israels centre-left friends and its enemies, the idea of a single state was not a plan for the future to be sought or averted but an accurate description of the reality on the ground, which was becoming more and more difficult to disentangle. Jews were already a minority in the territory under the control of Israel, which regulated the Palestinians borders, exports and imports, customs revenues and permits for travel and work. Legally, commercially and administratively, the Jewish and Palestinian populations were interlaced.

The more deeply entrenched this one-state reality became, the more resonant the charge of apartheid, and the more difficult to imagine undoing it through partition into two states. A battle against occupation could be concluded with a simple military withdrawal, but a struggle against apartheid could be won only with the end of state policies that discriminated against non-Jews. In the case of Israel, these could be found not just in the occupied territories, but everywhere Palestinians came into contact with the state. In the West Bank, Palestinians were denied the right to vote for the government controlling their lives, deprived of free assembly and movement, forbidden from equal access to roads, resources and territory, and imprisoned indefinitely without charge. In Gaza, they could not exit, enter, import, export or even approach their borders without the permission of Israel or its ally, Egypt. In Jerusalem, they were segregated from one another and encircled by checkpoints and walls. In Israel, they were evicted from their lands, prevented from reclaiming their expropriated homes, and blocked from residing in communities inhabited exclusively by Jews. In the diaspora, they were prevented from reunifying with their families in Israel-Palestine or returning to their homes, solely because they were not Jews.

Though in public, world leaders spoke endlessly of a two-state solution, privately many doubted it was still possible. They regularly condemned settlements (since these, unlike occupation, were illegal), but they did nothing to reverse settlement growth. They called for Palestinians to have freedom, but not through equal rights and citizenship in one state because, among other reasons, international law forbids Israel from annexing territory acquired by force. They saw Israel was subverting a two-state solution and taking measures to deprive Palestinians of rights. But they wouldnt exert any real pressure on Israel so long as it mouthed an intention to one day grant Palestinians some limited form of independence. Israel was thereby allowed to hold all the land while excluding the majority of its indigenous people, just as South Africa had aspired to do. In redefining the conflict as a case of apartheid, BDS activists saw a way out of this trap. The apartheid rubric could also undo the Palestinians greatest weakness fragmentation by uniting them in a common struggle against a single, discriminatory regime.

In Gaza this January, I met Haidar Eid, a professor of literature at Al-Azhar University and a co-founder of the BDS movement in Gaza. He is in his mid-50s, compact, with a scruffy grey beard and short curly hair, and a fondness for knitted turtlenecks. Eid said that he had never seen such strain on the people of Gaza. It was weeks before Gazans would launch the Great March of Return, the weekly protests along the Gaza border fence in which Israeli snipers killed more than 100 unarmed demonstrators and wounded several thousand more.

Along with tens of thousands of other public employees, Eids salary at the university had been cut by more than half, and he was looking for a second job. Over 40% of Gazans, including most young people, were unemployed. Eid scheduled much of his life around when the elevator for his 10th-floor apartment would be working, since Gaza had only six to eight hours of electricity per day. Scarce power prevented the full treatment of sewage, tens of millions of litres of which were dumped each day, raw, into fetid ponds and the sea.

Like more than two-thirds of Gazas population, Eid and his family are refugees from a village in present-day Israel. He opposed the Oslo agreement because it ignored Palestinian refugees. Oslo, he said, reduced the Palestinian people to residents of the West Bank and Gaza. But it was refugees who founded the Palestinian national movement, and who accounted for the majority of Palestinians worldwide. He said, The Palestinian issue is one thing: the right of return.