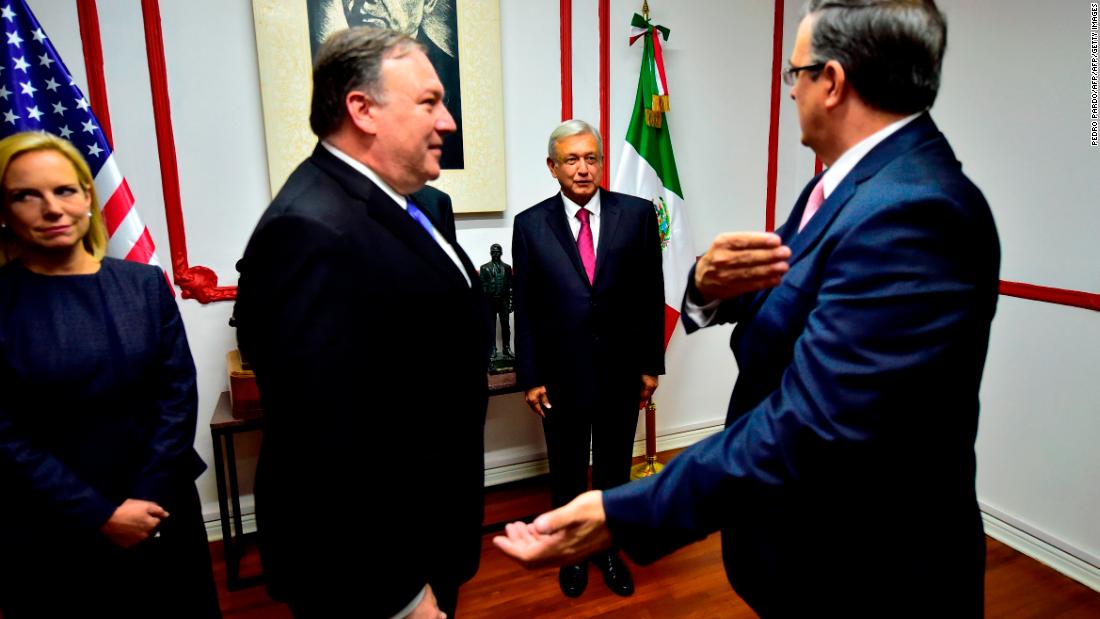 Mexico City (CNN)Secretary of State Mike Pompeo and other top US officials traveled to Mexico Friday for talks with the country’s president-elect, the first high-level meeting between the Trump administration and incoming leader Andres Manuel Lopez Obrador amid heightened tensions between the two neighbors and calls from Mexican leaders for the US to reunite families separated at the border.

Pompeo didn’t refer publicly to the family separations, but stressed border security issues at the end of his visit.

“The United States is committed to making measurable progress that ensures the security on both sides of that border,” Pompeo said. “Americans must be able to see improvements that better protect our national sovereignty and the safety of our local communities.”

At a meeting with Mexico’s president-elect, Pompeo made an appeal for better relations.

“As you can see Señor President, America greatly values our relationship with Mexico,” Pompeo said. “You have four of the most senior leaders here just after you were elected, we wanted to come down here to let you know that President Trump cares deeply for the success of the relationship between our two countries.”

“Our presence here today signals that to you,” Pompeo continued. In an oblique reference to Trump’s history of incendiary comments about Mexicans, including his dismissal of those who emigrate to the US as “rapists,” he said, “We know there have been bumps in the road between our two countries, but President Trump is determined to make the relationship between our peoples better and stronger.”

The talks covered a broad range of issues, including NAFTA negotiations, the opioid crisis, border security and immigration and trade negotiations.

Pompeo’s trip, sandwiched between a NATO meeting in Brussels and a high-level summit Monday with Russian President Vladimir Putin in Helsinki, Finland, underscores the importance of a relationship that has been battered by almost 18 months of Trump’s anger about the slow pace of building a border wall between the two countries and illegal immigration.

While the President has repeatedly aired his grievances about Mexico to score points with his base, officials beneath him have continued to work quietly to maintain one of the United States’ broadest trade, security and economic relationships.

The previously scheduled trip was to hold talks with Peña Nieto and his foreign minister, Luis Videgaray. But the delegation also met with leftist Lopez Obrador, known as AMLO, who will take office in December, an early overture to forge a relationship and begin work on a slew of issues important to both sides.

In a statement following his meeting with Pompeo, Peña Nieto said the two sides agreed to “constructively advance the renegotiation of the North American Free Trade Agreement” and “emphasized his government’s willingness” to continue the negotiation with the objective of finalizing it as soon as possible.

The secretaries and Kushner then met with Lopez Obrador and their future counterparts at the president-elect’s campaign headquarters.

As the secretaries and Kushner met with Lopez Obrador and their future counterparts, a few dozen protestors were outside the building, some holding signs that said, “Fear is not a policy,” “America was never white and never will be” and “I was deported – my crime? being brown.”

A senior State Department official briefing reporters in a phone call before Pompeo’s visit said the talks sought to build on a July 2 phone call between Lopez Obrador and Trump.

“The whole goal of Secretary Pompeo’s trip is to advance that positive agenda and to work with the Mexican government across all of the issue areas where we can make progress on,” the official said.

The official spoke on condition of anonymity, under normal State Department rules.

Mexico’s political transition provides an opportunity to reset US-Mexican ties, which have been strained under Trump and Peña Nieto. Peña Nieto canceled a planned visit to the White House in February after a tense phone call in which Trump demanded Mexico pay for the border wall. And since taking office last year, Trump has threatened to tear up the trade agreement between the US, Mexico and Canada. 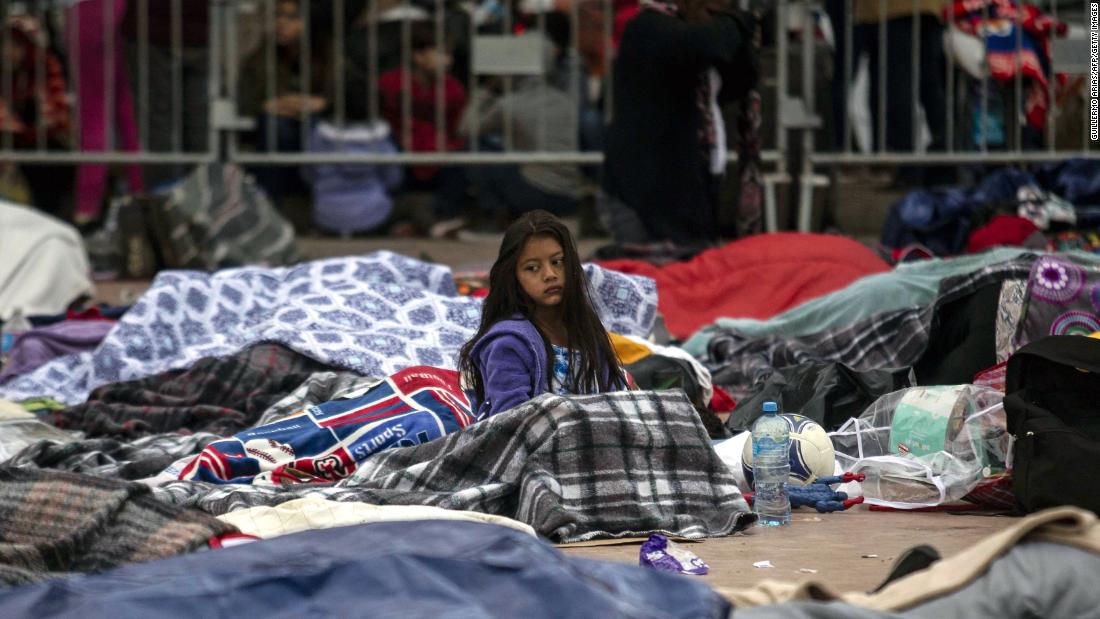 In his press statement, Pompeo said the US and Mexico are “committed together to work forward on NAFTA. The United States will continue to work with Canada and Mexico on an updated agreement. We all agree that we want North America to remain the world’s most competitive, and economically potent region.”

Videgaray said that Pena Nieto had agreed with Lopez Obrador to create a “united front” regarding relationship with the US, especially with regard to NAFTA and the relationship.

“This is a moment of definition between the relationship between the United States and Mexico,” Videgaray said, “but it is also a moment of for opportunity” for Mexican leaders.

Lopez Obrador’s election last week, with a whopping 53% of the vote, gives him a strong mandate for change. While he has criticized the United States in the past, he pledged throughout his campaign to seek productive, mutually respectful relations with Washington and to support the successful renegotiation of NAFTA.

Trump and Lopez Obrador, both considered populists and political outsiders, appear to be making an early effort to get along. Following his call with Trump after his landslide victory, Lopez Obrador said he proposed possible initiatives to Trump that could help lessen migration and bolster security, including possible US economic investment in Mexico.

“I received a call from Donald Trump and we talked for a half hour,” he said in a tweet last Monday. “I proposed to him exploring a comprehensive agreement: development projects which would generate employment in Mexico and with it reduce migration and improve security. There was a respectful treatment and our representatives will hold discussions.”

The president-elect has since described the call as friendly and said Trump did not bring up the idea of the controversial border wall. He said he plans to invite Trump to his inauguration, along with Canadian Prime Minister Justin Trudeau.

‘A situation of trade disputes’

The US wants a safe third country agreement with Mexico, as it has with Canada. Such an agreement would require asylum seekers to stay in Mexico, effectively preventing them from being allowed to seek refuge in the US. Mexican authorities have been reluctant to agree to such a deal, which could saddle them with hundreds of thousands of migrants fleeing Central America and other parts of the world.

The State Department official declined to say how prominently NAFTA negotiations would factor in Friday’s talks, but the presence of Treasury’s Mnuchin during the discussions suggests that getting a deal on NAFTA will be high on the agenda. Talks have stalled over US demands over autos and a phase-out clause for the 1994 pact as well as other issues. A fresh round of talks is expected later this month.

On Thursday, Mnuchin told lawmakers that the administration is prioritizing NAFTA negotiations following Lopez Obrador’s election. He denied that the US is in a trade war with major trading partners, such as Canada and Mexico, despite steel and aluminum tariffs imposed on those countries for reasons of national security concerns.

“I don’t think we’re in a trade war,” he told a House hearing. “We’re in a situation of trade disputes.”

On Wednesday, senators voted overwhelmingly to call on Trump to get congressional approval before using national security as a reason for imposing tariffs on other nations.