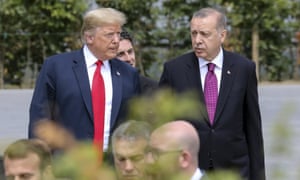 Donald Trump with the president of Turkey, Recep Tayyip Erdoan, at the Nato headquarters in Brussels. Photograph: Ludovic Marin/AP

Consider our political plight. The far right is in government in Austria. Polls suggest it is on the verge of becoming Germanys main opposition party. Last year, the far-right Front National won its best ever showing in Frances presidential elections, and the Gaullist centre-right is shifting towards its politics. In Italy, the hard right, which wants to deport Roma and migrants, is in power. The Hungarian government is degenerating into a hard-right dictatorship dripping in anti-migrant hatred and antisemitic tropes. Polands authoritarian rightwing government menaces democracy. In Sweden, a party born from the white supremacist movement is scaling record highs in the polls.

Here in Britain, the official leave campaign spent the EU referendum stoking up fear and loathing towards migrants. A far-right movement that regards a convicted fraudster and thug as its spiritual leader is growing; the mainstream press denounces MPs and judges as traitors, saboteurs and enemies of the people; and hard Brexiters are preparing to whip up populist fury by claiming that Brexit has been betrayed.

The lights arent going out, not yet, but they are flickering. Trumpism is on the march everywhere: Donald Trump himself is simply its most striking manifestation. There is every chance it will further radicalise and shift to extremes, particularly if there is another economic downturn, for which we are overdue. History tells us that when the racist right is on the rise, we dont sit back and hope for the best: we mobilise and fight back. And thats why the mass protests against his visit will be a launchpad for a decisive pushback against increasingly triumphalist right and far-right movements.

There are many other reasons to protest, of course. With a Brexit deal looking unlikely to pass through parliament, the Tories will favour striking a trade deal with Trump that opens public services, including the NHS, to US multinationals, as well as slashing environmental regulations and workers rights in a race to the bottom. The US has retreated from the Iran nuclear deal, and John Bolton one of Trumps key advisers advocates bombing the country. A message must be sent to the government that the public will not tolerate Britain joining another calamitous US-led military intervention. By walking away from the Paris agreement on climate change, the biggest carbon polluter in human history potentially poses an existential threat to humanity. Trumps offensive against womens reproductive rights and LGBTQ rights is emboldening bigots across the world, and it must be answered.

Yes, Trump is a contemptible misogynist, an anti-Muslim bigot, a scapegoater of migrants, a man whose administration separates screaming children from their parents and locks them in cages. Yet the protests against him must not see him simply as a pantomime villain, but as the chief representative of an extremely dangerous global movement. That means joining the dots with whats happening here: a Conservative party infested with anti-Muslim prejudice; the routine demonisation of migrants; and the deportation of gay refugees to countries where homosexuality is forbidden. Trump wants his theatrics to distract us. Instead, lets focus on the hatred he epitomises and which, unless we mobilise against it, threatens to overwhelm the western world.

Owen Jones is a Guardian columnist