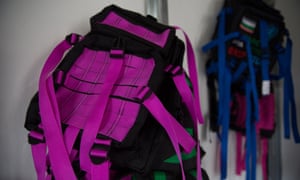 Of the 26 initial reintegration camps in Colombia, 24 remain in operation. They were established to incorporate the Farc back into civilian life, in line with the 2016 peace deal. The camps, supposedly temporary, are due to end in August 2019.

Life as a civilian is very different, says Sanchez. Before, we would be thinking about the war every day and you had to be moving all the time. Now we can work normally, without any danger.

The former combatants have decorated the accommodation to their tastes, with Marxist murals of Che Guevara and quotes from Farc leaders.

The UN says the reintegration process has made progress but remains complex. Many former fighters have left the camps to seek the families they left behind during the conflict; others have gone in search of completely new lives.

The mission has identified that a considerable number of ex-combatants have left the reintegration spaces and are increasingly dispersed, which is creating new challenges, says Ral Rosende, head of the UN verification mission in Colombia.

Promises of sustainable ways of making a living, like the creation of fish and pig farms from which the ex-rebels can sell agricultural produce, have yet to be implemented in some camps, including La Plancha.

However, the government-run Colombian Reintegration Agency (ARN) says departures are normal as people head back to their families and communities.

Important advances have been made in terms of academic training, work training and in ways to make a living, but there is still much to be done. This is a long-term process, says Juan Carlos Zuleta, a coordinator for the ARN.

The ARN are still awaiting funds for the fish farm in La Plancha, which they expect to be a key economic generator.

Educational programmes are being implemented and many ex-combatants in Anor are receiving practical training in healthcare and epidemiology with a view to becoming rural health promoters.

But civilian life takes getting used to for some. Wladimer Camargo, 36, misses the guerilla camaraderie to which he became accustomed after joining the Farc at 16.

I really loved it when we were united and we had cultural activities and meet-ups. Wed be really happy and wed eat and drink and see people who we hadnt seen for five or six months because they had been in combat in other zones, says Camargo.

He wants to stabilise his financial situation so he can go back to his hometown, Bucaramanga, and reconnect with his family. But it is daunting.

In a city, I wouldnt have the experience of a person who has lived there for 10 or 15 years. Its like a person from the city who comes to live in the mountains, who knows nothing. So, its difficult. But we are used to overcoming obstacles a guerrilla has that trait and it never leaves them, he says.

Colombia inaugurated its new president, right-winger Ivn Duque, last month, but his connection to a political party that has staunchly opposed the peace deal has created a sense of uncertainty among former fighters.

We have seen that the Democratic Center party has always been against some parts of the peace agreement and when it comes to them being in power, it is logical that it produces some uncertainty for us ex-combatants, because we know that they feel resentment, says Camargo. We hope that they will contribute to build peace in Colombia.

The UN says the new government has expressed interest in the economic and social reintegration of ex-combatants. The hope is that others like Sanchez and Guzman can adjust to civilian life, but the peace project has been tough to pull together.

As the process begins to fray, it will take more than a measure of political ingenuity to bring the thousands of former guerillas into the fabric of a peaceful society.