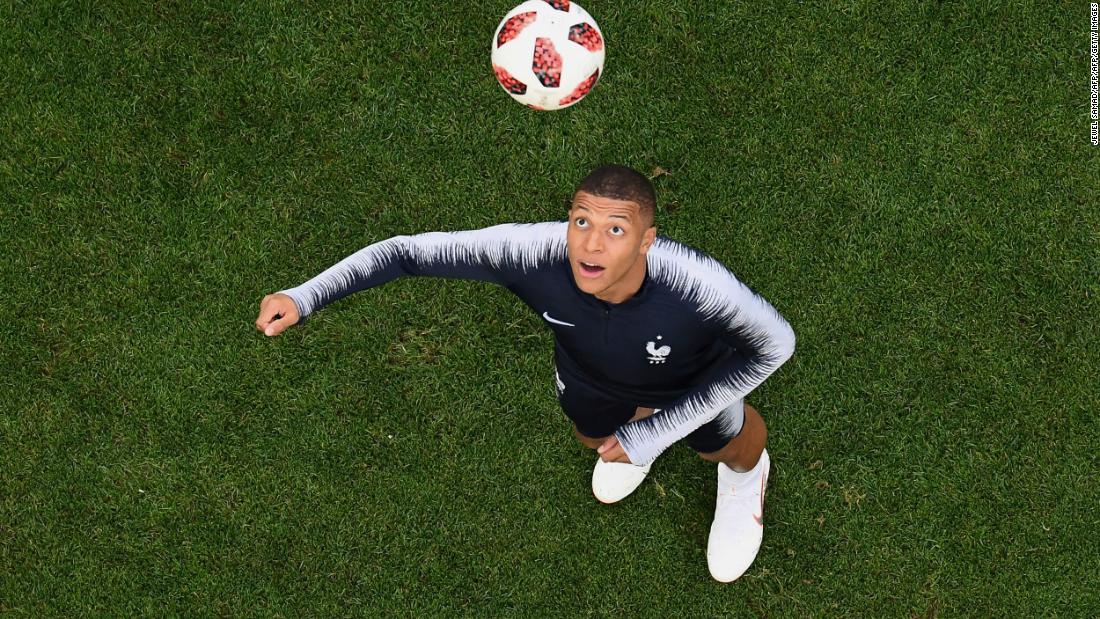 (CNN)Situated in a lavish corner of France, AS Monaco’s famed football academy has produced some of the game’s biggest stars.

But there is a new star who has since emerged and has the capacity to surpass them all: Kylian Mbappe.

The teenager arguably shone brighter than any other player in Russia, winning the young player of the tournament award and leading his country to only its second World Cup triumph. And all this at the age of 19.

Ahead of Sunday’s World Cup final between France and Croatia, CNN Sport spoke to Vadim Vasilyev, AS Monaco’s vice-president, who played a key role in Mbappe signing his first professional contract with the Ligue 1 club.

When was the first time you saw him play football and what were your first thoughts and feelings?

“When I first heard about him my colleagues said: ‘Look, we have a very talented boy, we have to sign him.’ So I said: ‘What’s the problem? Let’s sign him.’ They said it wasn’t easy and it turned out there were some complications.

“He was not really very happy and actually he wanted to go. I started seeing his parents and watching him in training and I sent him to the first team to train with our coach (Leonardo) Jardim. They said: ‘Wow, how come this boy is in our academy and I didn’t know about it.’ We built a relationship of trust and then he signed his pro contract.”

Many people expected him to be a star, but did you think it would all happen before he was even 20 years old?

“Two years ago, or perhaps even more, I knew that he was a phenomenon. It’s not just ‘very good,’ it’s not ‘top,’ it’s a phenomenal player.

“He has all the ingredients, then of course it all went very quickly; becoming French champion with us, going to the semifinal of the Champions League and now the World Cup. It all went quick for sure but if you know the quality he has and the kind of person he is, then I’m not surprised really.

“Of course it happened more quickly than anybody could have envisaged, even himself, that’s for sure. But he’s doing it at this level and I’m not surprised at all. He did it at academy level, Ligue 1 level, then two years (seasons) ago he did it in the Champions League, the famous game against Manchester City where he exploded.

“He played against Manchester City on an amazing level in front of the whole football world. It just confirmed what we knew all along, it’s an amazing talent and this boy will become one of the best — if he isn’t already — one of the best in world.”

What do you think it is about him, apart from his incredible talent, that has allowed him to get to the top so quickly?

“He breathes football, sleeps football, actually nothing else is on his mind. He didn’t even go out when we won the title two years ago.

“All the boys went celebrating and he was so tired he just went home. He is really dedicated and he has a very competitive spirit, he wants to break all the records.

“So he’s a good competitor, he’s also stubborn and if he doesn’t play he feels bad. He’s, like, sick if he doesn’t play. He also has a great family, I know the mother and father well, I saw the father yesterday.

“They’re an amazing family supporting him. They’re next to him, are very intelligent people and are a really good healthy family, so all the ingredients (are there).

“When you talk to him you don’t talk to a 19-year-old boy, you talk to a 30 or 25 year-old at least. There’s the maturity. Trying to find a weak point, I can’t. Then of course you can never say how long will it take him to win the Ballon d’Or, but he will be there soon for sure.”

The race for the Golden Boot at the World Cup is in the final stages … Harry Kane is in pole position … unless he is pipped by Romelu Lukaku or Antoine Griezmann, but both those players need a few more goals. . . . #worldcup #worldcup2018 #russia2018 #goldenboot #harrykane #lukaku #griezmann #sports #video #design

What is he like as a person? It seems like he’s stayed humble despite his rapid rise to the top.

“I spoke to him, we spent some time together after we won the French title, he always had it in him. He knew this would happen, he didn’t know how and when but he believed in himself and he knew his destiny is to become a big, big, big player and he’s very sure of himself. 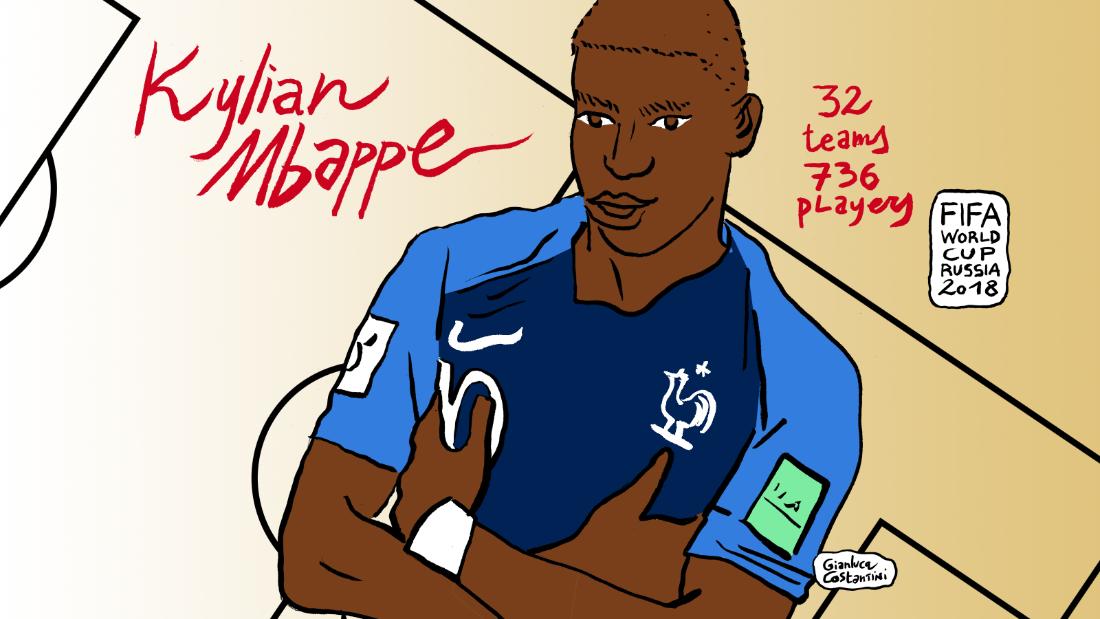 People have compared him to Thierry Henry, beginning as a winger and starting careers at Monaco. Do you see the comparisons?

“He is himself and he will write his own history in football and I agree with that. Of course you can find some comparisons but I wouldn’t like to do that because I respect Thierry — I met him the other day, I have Thierry’s jersey in my office, he came from our academy — but we shouldn’t compare and I know Kylian doesn’t like it.

“He is himself and he’s a huge talent and he will write his own history. He will be remembered as Mbappe and not as somebody that is compared to even another great player.”

Some of the biggest clubs in the world were after him, how did Monaco convince him to sign?

“I think we offered the right sports project. Historically we’ve been one of the best, we were just talking about the four World Cup winners from 1998 came from Monaco’s academy. That’s already a big statement, as big as it can be, that we raise the talents and let them play.

“Chelsea has a fantastic academy but I don’t know Chelsea players playing for the first team. This is what makes us different. There are other very good academies in the world of football but we give the chance for the boys to play in the first team.

“But I think it was human relationship between the management of our academy and his parents. So in the end they are really very happy they made the right choice.

“I know he also visited Real Madrid. Zidane was coaching the B team and they wanted him, they spent a week there but in the end they said we want to go to Monaco.

“It’s the right environment, great academy, there’s enough pressure but not too much. We have the right kind of pressure and we’re proven to give chances for the best talented boys. You cannot beat that.”

“The lines spring out from the base, rising in spirals, stretching out to receive the world,” says Silvio Gazzaniga of his World Cup trophy design. “From the remarkable dynamic tensions of the compact body of the sculpture rise the figures of two athletes at the stirring moment of victory.” Come Sunday at the final of Russia 2018, which team’s players — Croatia ?? or France ??— will get their hands on this 6,174g trophy, 4,297g of which is pure gold. Animated illustration by @channeldraw . . . #worldcup #worldcup2018 #russia2018 #trophy #gold #design #artist #illustration #mp4

Was it the right time to move or would you rather he stayed an extra season?

“I would have obviously preferred him to stay one extra season, in the end it was meant to be. Things started going so quickly, the offers we started receiving were just too big for us and then we had some long conversations and we said ‘okay that’s the right time.’

But it was a very difficult decision, a difficult emotional decision. We had many, many meeting and lunches and dinners but I’m very happy for him and I’m very happy we kept a close relationship. So we made the right choice in the end.

“It was difficult for us because he went to a direct competitor. He explained his choice to me. He’s from Paris and before going outside to a big club like Real Madrid or Manchester City, he wanted to write history in his own country and this is great.

“He knows he has his life in front of him as a footballer and he wanted to write history in his own home town and country and then I said: ‘Okay Kylian, I cannot get in the way, it’s your life. You have to decide.’ Of course we would prefer you to go to Real Madrid but this is your life, it’s not for us but we respect that.”

Do you feel proud that your club took him in as a kid and nurtured him and now he’s playing in a World Cup final?

“Very proud, very proud. When it was the game France vs. Argentina which he won on his own, it was an amazing feeling. It’s a joy that we helped him.

“He is also grateful to Monaco. Of course he would have succeeded anywhere but that it happened so quickly is thanks to Monaco. We gave him the chance, we had an amazing season, he participated.

“He was just amazing for the title (win) and in the semifinal of the Champions League. And now one year later, the World Cup final. It’s mind-boggling but knowing the core qualities and personality you understand where it comes from. Okay, this is not a miracle, it’s something that was meant to be.”

Neymar, Ronaldo, Lionel Messi — no big names have shone at this World Cup, do you think Mbappe has been the stand out player at the tournament?

Have you spoken to him much recently? How does he feel about the tournament so far and his performances?

“I saw him on Sunday at their training camp. He’s very happy of course but also very motivated, as the whole team is. They understand this is the moment, They have all the chances so they’re really concentrated.

“He’s happy but at the same time he knows he has to do more. He’s happy for a moment or a few days but then he passes to another thing. This is what makes him special. He knows he’s meant to do more, his destiny is to do more. Of course he can have his ups and down but if you look he’s definitely going up.”