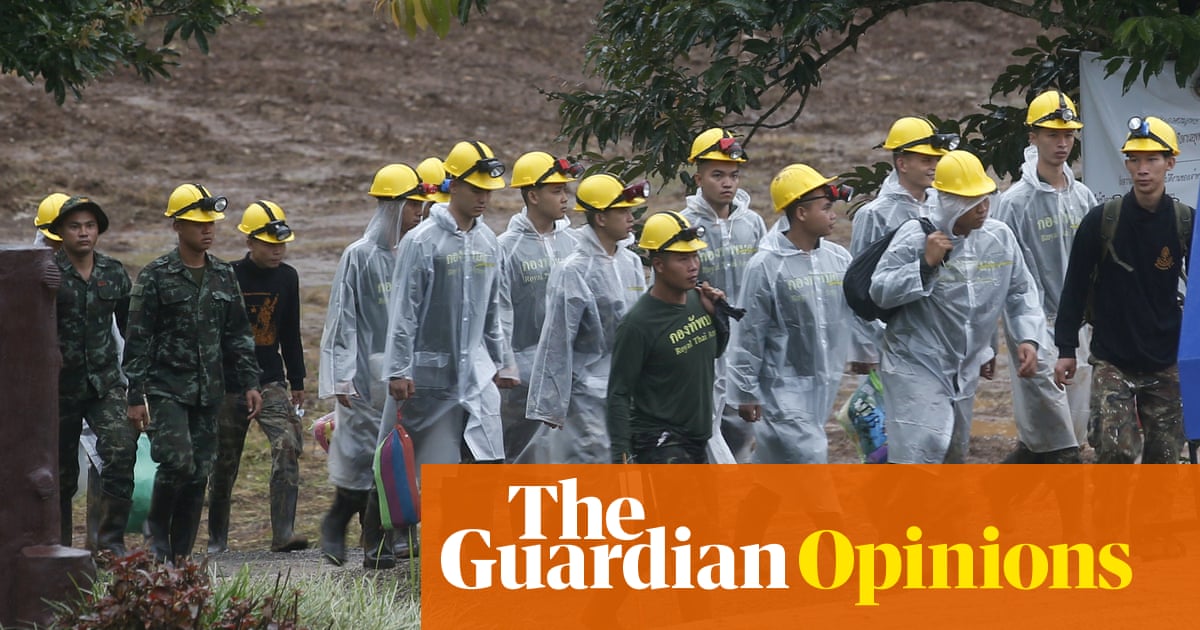 Sometimes all other news seems irrelevant. The Thai boys and their coach are out. They are rescued. Its been heart-in-mouth stuff for days, but finally the Wild Boars and their young coach are free and, God knows, I am in bits and overawed at this rescue effort at the pure unflashy heroism of these divers. The world has watched and prayed for the lost boys.

To be trapped underground as dark water rises is the stuff of nightmares. To enter willingly into these cavities and squeeze through in order to take in food and medicine and finally to free these boys is courageous beyond belief. In the end, oxygen is what mattered, and in taking in oxygen for the boys, one man lost his life, not having left enough for himself. Saman Kunan died trying to save the lives of others. We must not forget him.

The world has been waiting, collectively holding its breath, not daring to hope, in case this rescue effort could not save all of them. The news that the boys had been found at all promoted all sorts of speculation about how they might be got out. Drilling down? What about the coming rains?

Most of us could not understand, or even imagine, the conditions in the caves, never mind how to slither through gaps in the rocks of 40cm (16in). Removing an oxygen tank to get through tunnels that most of us could scarcely fit through in blackness seems hellish and scarcely plausible. But they did it, and they knew when and how to do it.

When I say they, I mean this fantastically well coordinated team of Thai Navy Seals and international cave divers who came forward to help. Experts: who needs them? These are people we had never heard of, who say quietly that this is what they do, that all these years of diving have prepared them for this rescue. People who cross continents to save children. People who have had to think about how to keep these children mentally and physically strong enough to pull them out. People who have brought dead bodies out of caves before. And yet back in they go.

This story touches us because it is elemental, but also because every detail runs counter to the egomania and selfishness and fake bravado that appears to be running the world. The parents of the boys wrote to reassure the young coach that they didnt blame him. Some say he had got the boys meditating in the cave. The Thai government has calmly insisted on protecting the boys and their families from cameras. This story has so far been bigger online than on TV, as there has been nothing much to see except ambulances and helicopters, and the odd glimpse of the exhausted face of a frog as they called the divers.

Thai locals set up charcoal grills to feed people. The boys first out are now asking for proper food. The need to nourish speaks to us all. Then the light relief of the grandstanding Elon Musk sending a tiny submarine.

And now all of us simply give thanks that they are free. As the world fragments, here good people have got it together. The boys will still need much help. I know that trauma does not evaporate with news coverage. But what we have seen was not a random act of kindness but a model of international cooperation and coordinated selflessness. This is how human beings can be, and it has been magnificent.

The boys have been freed by bravery, incredible expertise and a word that I am scrabbling for and can now, finally, use: love.

Suzanne Moore is a Guardian columnist