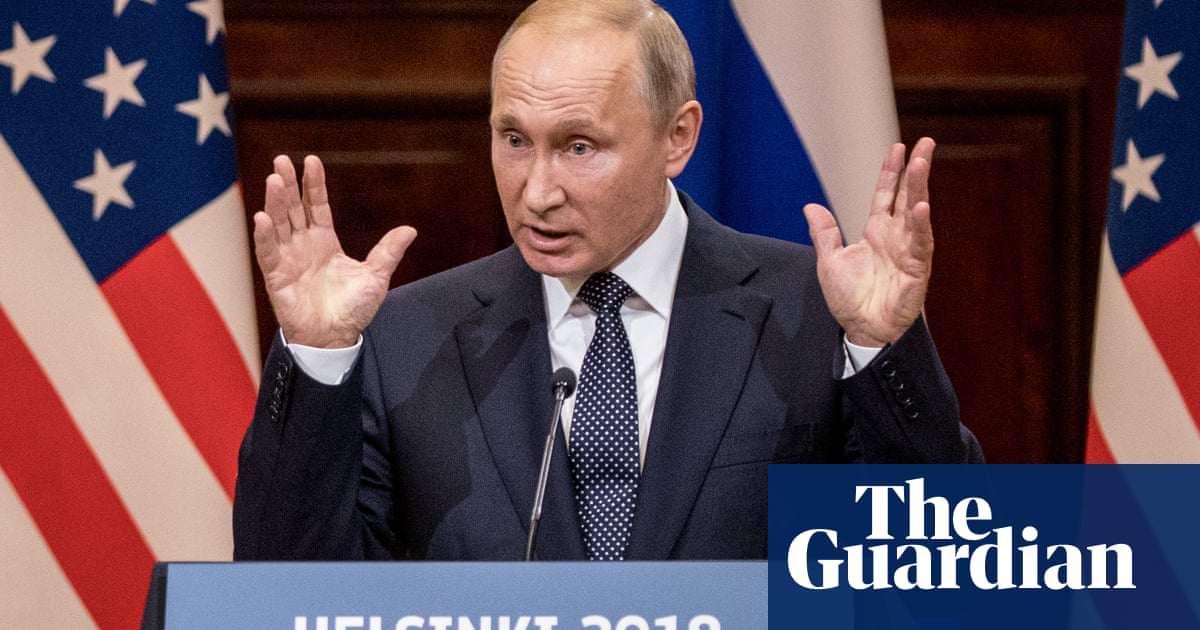 Fresh off a controversial summit that drew widespread condemnation from America and its allies, Vladimir Putin and Donald Trump struck a defiant tone in a pair of television interviews that sought to dismiss Russian interference in the 2016 presidential election.

Hours after Trumps joint appearance with Putin in Helsinki was dubbed by some US officials as treasonous, the Russian president rejected allegations that his government meddled in the 2016 election as utterly ridiculous.

Trump, meanwhile, claimed without evidence that Putin had essentially absolved his campaign of collusion with Moscow.

The two leaders spoke separately to Fox News following a summit that prompted some in the US to declare one of the darkest days in the history of the American presidency.

Putin sat for an often-combative interview with Fox News anchor Chris Wallace, while Trump chose the friendly confines of Sean Hannity, one of his most loyal and public boosters on the network.

Both presidents continued to deflect from the US intelligence communitys widespread assessment that Russia interfered in the 2016 election with the aim of boosting Trump and damaging Hillary Clintons candidacy.

Do you really believe that someone acting from the Russian territory could have influenced the United States and influenced the choice of millions of Americans? Putin asked.

This is utterly ridiculous.

Speaking with Hannity, Trump seized on Putins denial of Russian meddling as evidence his campaign was in the clear.

First of all, he said there was no collusion whatsoever, said Trump, before lavishing praise on his Russian counterpart.

I thought that President Putin was very, very strong.

Their comments followed a stunning joint press conference on Monday, which saw the American president side with the Kremlin over US intelligence authorities on the issue of Russian meddling in the 2016 election.

They said they think its Russia; I have President Putin, he just said its not Russia, Trump told reporters with Putin by his side.

I will say this: I dont see any reason why it would be. I have great confidence in my intelligence people, but I will tell you that President Putin was extremely strong and powerful in his denial today.

Trumps appearance drew an avalanche of backlash from both parties in Washington and prompted Democratic leaders to openly question if Putin holds damaging information over the US president.

Asked directly by Wallace if Russia had kompromat or compromising material on Trump, Putin denounced the allegations as utter nonsense.

I dont want to insult President Trump when I say this and I may come [across] as rude but before he announced that he will run for presidency, he was of no interest for us.

He was a rich person, but, well, theres plenty of rich persons in the United States, Putin added. But no, it would never occur to anyone that he would think of running for president. He never mentioned his political ambitions.

Trump echoed Putins claim in his own interview, stating of the Russian president: He said as strongly as you can say it, they have no information on Trump.

The statements were particularly jarring in light of last weeks indictment of 12 Russian military officers in the hacking and leaking of Democratic party emails, which shed further light on Russian cyberattacks against the US and attempts to sow discord among the American electorate.

Putin, who earlier conceded he wanted Clinton to lose the election, echoed a line often pushed by Trump when pressed on the indictments: that the real issue was corruption within the Democratic party.

First of all, Russia, as a state, has never interfered with the internal affairs of the United States, let alone its elections, Putin said.

Putins latest effort to deny Russian involvement in American politics came as the US government charged a Russian woman with conspiracy to act as an agent of the Russian Federation. Maria Butina, who purported to be a gun rights activist, was charged on Monday with infiltrating the National Rifle Association (NRA) as part of efforts to influence the Republican party and US politics.

Putins interview grew combative at times, with Wallace at one point attempting to hand Putin a copy of the special counsel Robert Muellers indictment of the 12 Russian intelligence officers. Putin declined to take the copy from Wallace, and the two men repeatedly talked over one another.

Trump, by contrast, was teed up by Hannity first complimenting the president on his performance in Helsinki.

You were very strong at the end of the press conference, said Hannity, who focused part of the interview on alleged bias within the FBI and its investigation into potential collusion between the Trump campaign and Moscow.

The president slammed FBI agent Peter Strzok, who was reassigned from special counsel Robert Muellers team one year ago for exchanging anti-Trump texts prior to the election, as a disgrace.

In another striking exchange, Trump told Hannity he and Putin were not very far apart on Syria, where the Russian government has been condemned by the international community for propping up Bashar al-Assads regime.

But even as he opined on a handful of foreign policy issues, Trumps attention was repeatedly drawn back to the FBIs investigation into Russia and its impact on his desire to strike an unknown deal with Putin.

Trump said he and Putin agreed it was a shame that the FBIs investigation had dominated US-Russia relations.

Its the thing that he told me when he went in. He said: What a shame, Trump said of his meeting with Putin.

He felt it was very hard for me to make a deal because of, you know, all of this nonsense.

Muellers investigation into Russian interference in the 2016 election has brought indictments against more than 30 individuals and three companies. The investigation has also resulted in charges against several former Trump campaign officials.