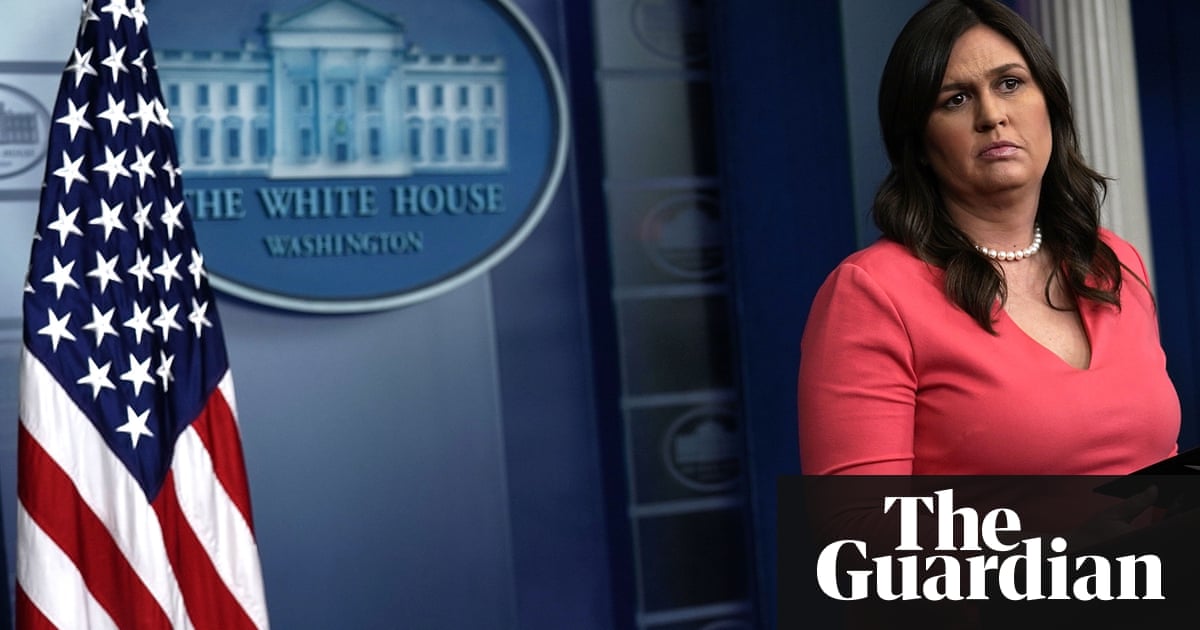 In week of controversy over family separation policy, staffer says she was asked to leave because I work for POTUS

The White House press secretary, Sarah Sanders, claimed on Saturday that she was thrown out of a restaurant because she works for Donald Trump.

Social media erupted, with some lavishing praise on the Red Hen restaurant in Lexington, Virginia, for taking a moral stand. Others sympathetic to the president urged a customer boycott.

Last night I was told by the owner of Red Hen in Lexington, VA to leave because I work for POTUS and I politely left, Sanders posted on Twitter. Her actions say far more about her than about me.

The press secretary added: I always do my best to treat people, including those I disagree with, respectfully and will continue to do so.

Her father, Mike Huckabee, a former governor of Arkansas, candidate for the Republican presidential nomination and strong Trump supporter, responded to her tweet by writing: Bigotry. On the menu at Red Hen Restaurant in Lexington VA. Or you can ask for the Hate Plate. And appetizers are small plates for small minds.

The Red Hen did not immediately respond to a request for comment on Saturday but Stephanie Wilkinson, the owner, told the Washington Post Sanders had already been served when she approached the press secretary and asked her to step outside.

I was babbling a little, but I got my point across in a polite and direct fashion, Wilkinson said. I explained that the restaurant has certain standards that I feel it has to uphold, such as honesty and compassion and cooperation. I said, Id like to ask you to leave.

Sanders, Wilkinson said, replied: Thats fine. Ill go. The press secretary walked out and others at her table followed. Wilkinson said: They offered to pay. I said, No. Its on the house.

The restaurant owner expressed no regrets, telling the Post: I would have done the same thing again. We just felt there are moments in time when people need to live their convictions. This appeared to be one.

Members of the Trump administration are facing a fierce backlash over the policy that has seen more than 2,300 children separated from their parents at the southern border and tarnished Americas reputation around the world.

Sanders banishment comes after Stephen Miller, a senior White House adviser responsible for its zero-tolerance immigration policy, and Kirstjen Nielsen, the cabinet member responsible for enforcing it, were reportedly heckled and hounded out of Mexican restaurants in Washington.

Sanders has been notably reluctant to answer questions on the issue. Mondays White House press briefing was delayed by four hours so Nielsen could fly back from New Orleans to face reporters instead. There were no briefings over the next four days, which is highly unusual.

That did not spare Sanders the wrath of restaurant staff. Jaike Foley-Schultz, who claimed he was a waiter at the restaurant, wrote on Facebook: I just served Sarah Huckabee Sanders for a total of two minutes before my owner kicked her out along with seven of her other family members.

Brennan Gilmore, executive director of the progressive group Clean Virginia, tweeted a photo of a handwritten note apparently from the restaurant that includes: 86 Sara Huckabee Sanders. The number 86 is industry slang for throw out.

Supporters and opponents of the administration swung into action with reviews on the restaurants Facebook and Yelp pages. Some gave it one star, others awarded it five. Twitter users traded blows over whether the incident was comparable to the case of a Colorado baker who refused to make a wedding cake for a gay couple, which went all the way to the supreme court.

Michael McNamara Sr posted on the Red Hens Facebook page: Better not speak while youre there because if the staff disagrees with you they will toss you out. Why bother with the hassle? Plenty of real restaurants who serve everyone.

Sapphire Cianfriglia wrote: I appreciate how you decided to take a moral standing against an administration that is essentially emulating Nazi Germany (locking up children, letting white supremacists march freely in the streets, etc).

The Trump administration is not the first to get an icy reception on the Washington foodie scene. Former defence secretary Donald Rumsfeld once took his family to Bucks Fishing & Camping, only for co-owner and chef Carole Greenwood to declare that she would not serve a war criminal.

Sanders has been reported to be planning to leave the White House, although she denied that was so.