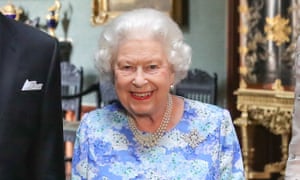 The Queen at Windsor Castle, during the visit of Belgiums King Philippe and Queen Mathilde. She is wearing the snowflake brooch, a gift from Canada. Photograph: Andrew Matthews/AFP/Getty

One person, however, who seems to have mastered how to handle Trump has been on top form over the past week. One who really knows how to get the better of him without even noticing. No, I am not speaking about Vladimir Putin, but, someone who may well be the greatest political mastermind of our age: our one and only Queen Elizabeth II.

Casual royal observers such as myself barely noticed the Queens fashion choices during Trumps visit, because we were too busy cringing at Trumps behaviour around her. Whether you give a fig about the royals or not and I come very much from the no fig end of the spectrum watching Trump galumph around in front of her, get in her way and generally act as if she wasnt even there was, just on a human level, throw-up-on-your-own-shoes nauseating. Shes a 92-year-old woman, show her some respect, you giant Oompa-Loompa! But, of course, expecting thoughtfulness from a man who, earlier this year, was photographed holding an umbrella over his own precious head, leaving his young son exposed to the elements, brings to mind words such as blood and stone.

And the Queen, wisely, appeared to expect none either, because it turns out she was sending us all coded messages via the medium of her brooches. Yes, her brooches read on and bow down in awe, James Bond. Twitter user @SamuraiKnitter has pointed out that on the first day of the Trump visit, the Queen wore a simple green brooch that was given to her by the Obamas to signify their friendship. On the second day, she wore a brooch given to her by Canada, a country with which Trump is less than pleased at the moment (also, it was in the shape of a snowflake, a classic Trump term for people who disagree with him.) And, for the last day, she chose a brooch the Queen Mother wore to the funeral of King George VI, so not one associated with happiness and joy. Queens brooches: 3. Trump: 0.