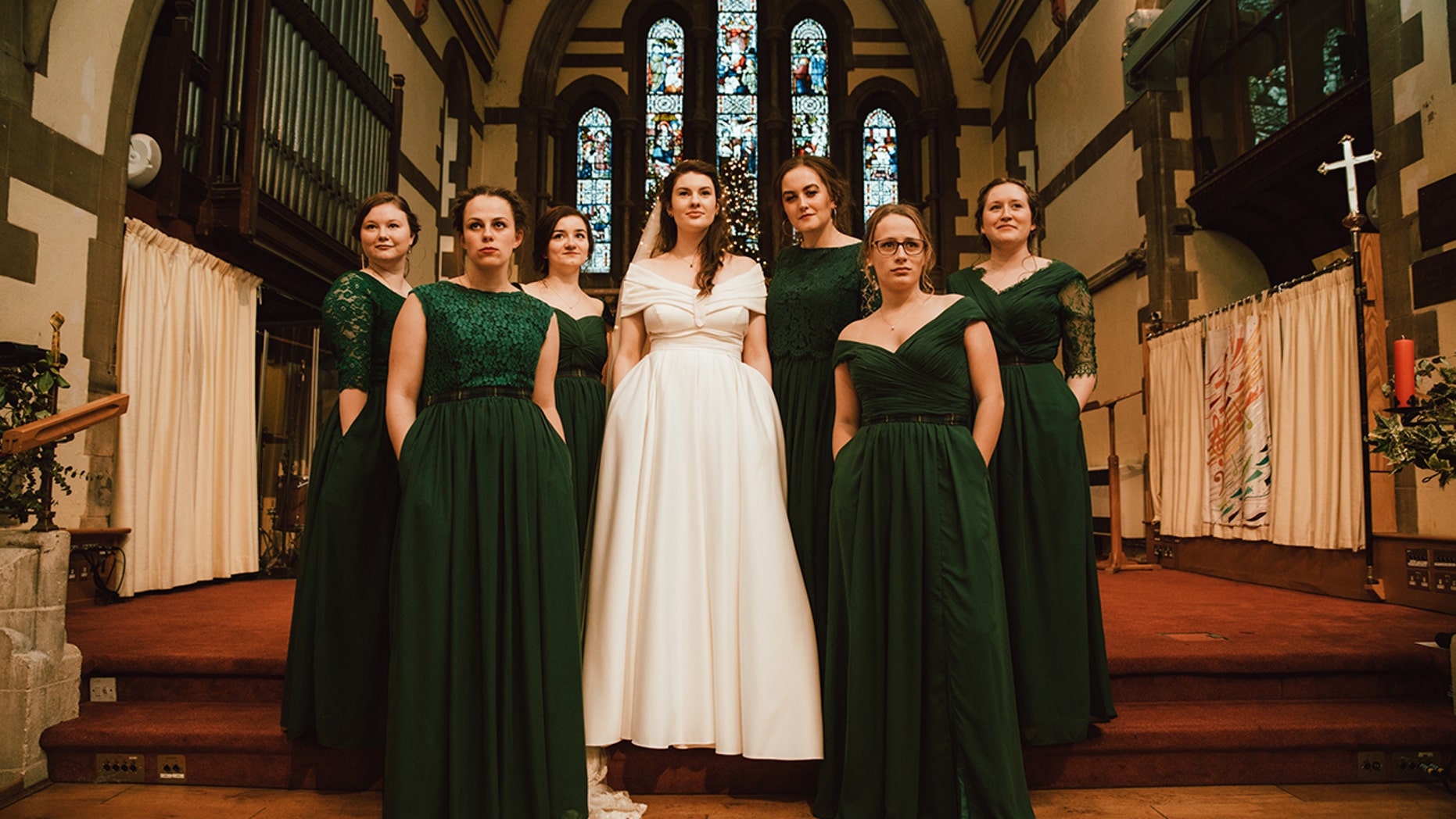 One savvy bride made sure her bridesmaids looked – and felt – their best on her wedding day, outfitting her six pals in bespoke, floor-length gowns complete with practical pockets. A photo of the bridal squad in a “power pose” on the church altar has since gone majorly viral online as Twittizens call for more pockets in women’s clothing.

On Jan. 23, bridesmaid Nell Goddard shared a hilarious photo from her friend Eve Paterson’s recent London wedding to Twitter in a post that has since garnered well over 10,000 likes and sparked more than 2,300 comments.

In the image, Paterson fiercely poses in front of a traditional altar with her hands in the (unexpected) pockets of her wedding gown, as her surrounding “bride squad” does the same.

“My friend got married last month and her dress and the bridesmaids’ dresses ALL HAD POCKETS. And yes, we did use them for storing snacks, thank you for asking,” Goddard captioned the cheeky pic.

“The dresses were great. Eve was clear from the start that she wanted her bridesmaids not only to feel comfortable, but also be practically equipped for all that the day involved,” Goddard told Fox News. “Each bridesmaid got to choose her own style of dress, and when we realized we could ‘add pockets’ for a few extra pounds, it seemed like a no-brainer… although it must be said that you’d never dream of having to pay extra for pockets on a groom’s suit!”

“I think these dresses have proved it’s possible to look good, feel comfortable, and be practically equipped for the day. Everyone who noticed the pockets loved them, and they were incredibly useful” she added.

In the hours since, the image has been met with massive applause, as countless Twitter users praise the practicality of pockets in gowns for both brides and bridesmaids – and opine that the detail deserves to be more frequently added in women’s clothing designs.

“Oh my god! I might have to divorce husband just so I can do this!!” one fan of the dresses wrote.

“Divine! You all look magnificent and adequately equipped for whatever the day may throw at you!” another exclaimed.

“Truly she knows how to make a blessed day be truly blessed,” one agreed.

“I really wish I’d thought of pockets when I got married. Such a little thing yet so important,” another mused.

The bride, meanwhile, told BBC that the custom detail was a no-brainer for the nuptials.

“It’s just so rare for women’s clothing to be practical. It might seem ridiculous to most men, but we often have to choose between convenience and looking good,” Paterson, a 24-year-old charity worker from Cambridge, England, said.

“When you have them custom made-to-measure, it only cost $7 extra to add pockets, so really it just felt like a no-brainer!” Goddard similarly told The Independent of the KF Bridal creation, detailing that the crew carried schedules and agendas for the big day in the special pockets.

The bride, too, acknowledged that though the general deficit of sufficient pockets in women’s clothing is a minor issue, it is a topic certainly worthy of discussion and further exploration.

“The more momentum this [topic] gets, the more we’re keen to say that we know this is a relatively small issue, and there are far bigger issues for women around the world! It’s just that the more those who have a platform are able to call out the little inequalities (like pockets!) the more we hope the bigger issues can be alleviated for women globally as well,” Paterson told Fox News.

As noted by the Independent, an August 2018 study from culture site The Pudding discovered that the pockets on women’s jeans were approximately 48 percent smaller and 6.5 percent narrower than those in men’s jeans. The Pudding team analyzed the pocket sizes of 80 pairs of jeans produced by 20 major brands including Calvin Klein, Ralph Lauren and Levi’s for the study.

PrevPreviousUPS Store deletes Christmas ‘shredding’ tweet after massive backlash: ‘You know what list youre on right?’
NextBeto O’Rourke: ‘What’s happening now is part of a larger threat to us all’Next