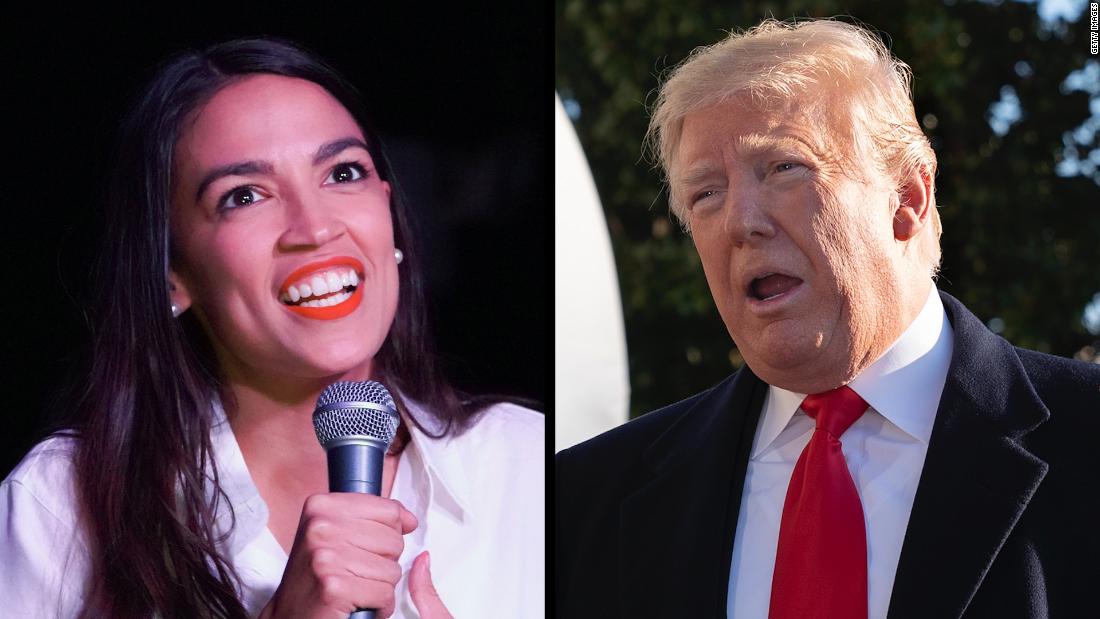 (CNN)The political conversation around climate change is often framed by two extreme narratives: climate change is either a farce that doesn’t exist, or it’s poised to kill us all quite soon. Over the past few days President Donald Trump and New York Democratic congresswoman Alexandria Ocasio-Cortez have provided the public with perfect examples of both sides.

Both statements gave ammo to the other side. Environmentalists lambasted Trump while some journalists on the right mocked Ocasio-Cortez’s 12-year timeline. With a topic as politically divisive as climate change, imprecise language and factually incorrect statements not only provide easy targets for the other side but also hinder conversations focused on building a consensus around real solutions.
Below is an analysis and the broader context of these two claims.

Trump is peddling the same rhetoric that climate skeptics used for years, pointing to cold winter weather as proof that climate change does not exist. (Remember when Senator Jim Inhofe brought a snowball to the Senate floor?)
Here, Trump is conflating weather and climate, something he’s done many times before (here, here and here, for example). Weather refers to daily variations in temperature, precipitation, etc. and climate is the long-term average of these conditions over a given area.
While portions of the US might be mired in a deep-freeze, many other parts of the planet are seeing record-breaking heat waves (like Australia at the moment). When you average these out over the planet, the hotter temps are tipping the scale, which is why the hottest 5 years on record for our planet have all occurred since 2014.
“People also tend to confuse what is happening where they live as an indication of what is happening globally,” says Marshall Shepherd, Director of the Atmospheric Sciences Program at the University of Georgia and a former president of the American Meteorological Society. “It is ‘Not Where You Live Warming,’ it is Global Warming,” Shepherd told CNN.
In the US, public opinion is shifting away from Trump’s view. Growing majorities of Americans now say that climate change is real and man-made, according to surveys published this week from the Yale Program on Climate Change Communication and George Mason University. More than seven in 10 Americans (73%) say global warming is happening — up 10 percentage points from early 2015 — according to the Yale surveys. And 62% now say warming is mostly human-caused.
Similarly, about 8 in 10 Americans, including two thirds of Republicans, believe climate change is causing extreme weather, according to a Monmouth University poll from November 2018.

With her 12-year timeline, it’s possible that Ocasio-Cortez is referencing a major global report from last October by the Intergovernmental Panel on Climate Change (IPCC), the United Nation’s scientific authority on climate change.
The year 2030 came up prominently in that report, marking the first year that the planet is likely to warm by 1.5 degrees Celsius (the report provided a range of between 2030 and 2052). This temperature was set as an idealistic goal during the 2015 Paris Climate Accord. It is widely seen among climate scientists as a marker, beyond which long-term, irreversible change begins to occur, but does not signify the end of the world.
“Every extra bit of warming matters, especially since warming of 1.5°C or higher increases the risk associated with long-lasting or irreversible changes, such as the loss of some ecosystems,” according to Hans-Otto Pörtner, a Co-Chair of the IPCC.
In order to keep warming within the 1.5 degree range and limit the effects—which get considerably worse as warming approaches and passes 2 degrees—the report states that human emissions of carbon dioxide (CO2) must decline by 45% by 2030 and be essentially zero by 2050. A popular narrative that resulted from the report was that we only have 12 years to avoid the dire consequences of climate change.
The report certainly does not say that the world will end in 12 years, but it does warn that if there has not been a major shift in human’s reliance on fossil fuels for energy, land, and industrial systems by that time, we may begin living in a world that is more hostile to our current way of life — with higher sea levels, hotter heat waves and more extreme disasters.
Says Shepherd, “When the extreme rhetoric dominates the headlines or social media space, the real science gets lost. Trust me, climate change is bad enough as it is, it doesn’t need to be inaccurately inflated…”
To that point, if we’re ever going to make progress on as complicated an issue as climate change, it’s essential to strip away the hyperbole on both sides and focus on the facts.

PrevPreviousJayme Closs turns up ‘like a ghost’ on a Wisconsin street 70 miles from where her parents were shot dead at home
NextBernie Sanders acknowledges ‘economy is a disaster’ in Venezuela, as Omar accuses Trump of coup effortNext