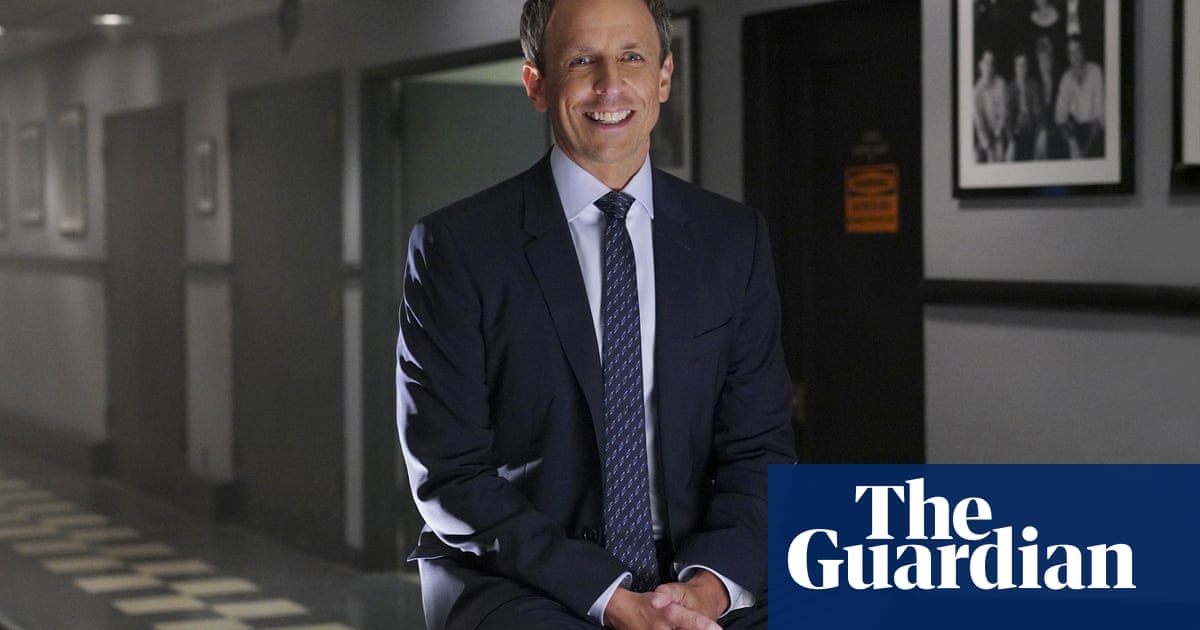 Alec Baldwin makes his first appearance of the season as Donald Trump for a cold open that predictably sends up the in no way a publicity stunt meeting between the president and Kanye West. As the manic, rambling West, featured player Chris Redd nails the impression. Baldwins Trump doesnt have much to do for once, hes not the most belligerent person in the room. Most of the best lines go to Kennan Thompson as a bewildered Jim Brown, who wonders if its possible for West to be tri-polar, before realizing that mental health in the black community is a much bigger issue than I thought.

As with this seasons previous opening sketches, this one doesnt try to satirize the weeks big political story so much as merely reenact it. Thats understandable Trump and Wests conference was beyond the reach of satire.

Former head writer and cast member Seth Meyers returns to host. He uses his opening monologue to tell a crazy but all too plausible story about Kanye (the center of the shows attention for three straight weeks). He recalls the time he pitched a sketch to the rapper, the musical guest at the time, in which he interrupts a series of acceptance speeches for a variety of award shows: The Kids Choice Awards, the Nobel Prize, a county fair. Its not until after Meyers describes the sketch which Kanye did, with no problems that he reveals that it took place in 2007, two years before the rappers infamous interruption of Taylor Swift at the VMAs.

The following sketch, Movie Talkback, takes place during a post-screening Q&A, in which the director (Meyers) fields a series of increasingly moronic questions, including Any reason the father was played by a man?, Give me one good reason youre not Latino, and Why did you do the names?

Though the sketch peters out, the first part is a pretty dead-on representation of the grating questions entitled audience members ask at such events.

Beta Force is a late-night ad featuring Meyers as a sweater-vest wearing, droopy-mustached suburbanite whose low-energy lifestyle moves him to take a testosterone-boosting supplement. It reinvigorates him sexually and physically, transforming him into a full psycho. Eventually, his exhausted wife starts slipping him Beta Force, a testosterone-reducing supplement, in order to return him to his milquetoast state.

In Traffic Stop, Meyers plays a man pulled over by the Thirsty Cops, female officers (Leslie Jones and Ego Nwodin, Kate McKinnon shows up later) who sexually harass him. Anything you say or do may be held against your body, one says. The sketch never goes anywhere, with Meyers characters concluding shrug mirroring the audience reaction.

Something of a thematic follow up to Movie Talkback, the next sketch, A Frightening Tale, finds Meyers telling a scary campfire story to a group of friends. He recounts a coffee meet-up with an obnoxious aspiring filmmaker, the type of basic filmbro who drones on about CGI and who thinks his boring conversations about movies would make meaningful movies in and of themselves. The sketch cleverly transitions into a parody of the recent horror film Truth or Dare, with Meyers passes along the curse of the annoying young mans constant texting to one of his friends simply by giving the guy their number.

Jail Cellmate finds Meyers newly incarcerated and forced to share a cell with none other than Bill Cosby (Thompson, finally back to his best-known impersonation). Cosby dodders around his new home, which hes set up to mirror the living room set from his old sitcom, referencing his catchphrases and talking points while refusing to accept reality. Per Meyers: Just like Cliff Huxtable, except in one major way. Though the spot doesnt necessarily hold any punches Meyers asks why Cosby hasnt just considered dying neither does it land enough to become a talking point.

Paul Simon makes SNL history by being the musical guest for a ninth time. He performs a scaled-back version of Cant Run But, off his 1990 album The Rhythm of the Saints.

Weekend Update kicks off with the obituary for the earth published this week by scientists, before hosts Colin Jost and Michael Che are joined by Goop staffer Baskin Johns (Heidi Gardner), in honor of the lifestyle brands 10th anniversary. The high-pitched salesperson begins to choke in terror after Che casually remarks that Goop founder and owner Gweneth Paltrow is likely watching. Gardner breaks under the pressure, revealing the cult-like stronghold of Goops cruel overlord.

Jost and Che circle back to the Kanye/Trump summit, which segues (much to the audiences delight) into a new REALLY!?!, with Seth Meyers. The trio proceed to further lay into Kanye and Trump The only place those two should be meeting is in group and Che drops one of his four contractually agreed N-words of the season (Meyers, dismayed, says Lorne Michaels never offered him one).

While the next sketch, Bayou Bennys Liberal Lagniappe, may not be the one that gets people talking, it does get the biggest laughs. An ultra-progressive talkshow (its main sponsor is Antifa) based out of the Louisiana swamp country, its panel is made up of Taylor Swift (Gardner), two costumed mascots (the Awnry Gator dat done been sleepin under my house and Da Chili Pepper wit da Sunglass Ses) and an utterly confused Meyers (playing himself). The whole setup is really just an excuse to let Beck Bennett (so often the straight man) cut way loose as Bayou Benny, a mumble-mouthed old gentleman who looks like Colonel Sanders and sounds like Foghorn Leghorn. Bennet excels, and for once the abruptness of the sketch leaves us wanting more.

Simon returns to the stage (possibly for the very last time, if his announced retirement holds) and performs Bridge Over Troubled Water.

Its too bad that SNL has such a strict formula. The song would have made for a fitting close to the episode, given Simons history with the program and friendship with Michaels. Unfortunately, its followed by Couples Dinner, a laugh-free sketch built around the obnoxious pronunciation of the word Cuba by a pair of jet-setting idiots.

Things bounce back with the music video for Trees an environmentally-themed rap from Pete Davidson and Chris Redd but the energy totally deflates in the last sketch of the night, Halloween Gig, wherein the biggest joke is Kennan Thompsons pronunciation of Gucci shoes. It makes for a flat ending to what was otherwise the most consistent episode of the season, Meyers proving that returning cast members make the most natural hosts.