Lip service: what Kylie Jenner really sells us is a brush with fame 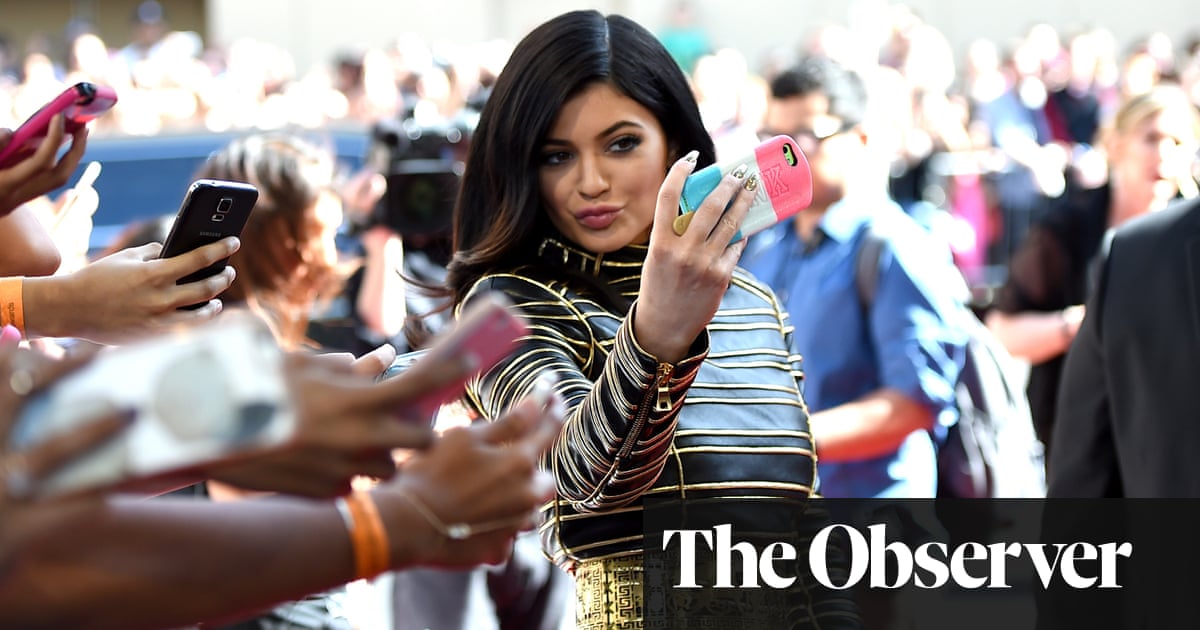 Move over Zuckerberg. The success of the new youngest self-made billionaire is all about lifestyle aspiration in the Instagram age

In the spring of 2015, girls started sucking shot glasses. They would put their lips into the glass, and then theyd suck, creating a vacuum which drew blood to the surface of their lips to create a swollen, puckered pout, and then theyd post a selfie on Instagram, hashtagged #KylieJennerChallenge. Kylie Jenner had been 10 when she first appeared on Keeping Up with the Kardashians eight years earlier, alongside her siblings and parents, Kris and Bruce (now Caitlyn), and she grew up on screen. On screens, really: she built a following of millions on social media, where her selfies became a brand of their own.

The popularity of the hashtag caused ripples, and those ripples made waves. There was controversy surrounding the injuries sustained by the teenage participants, and discourse on the sexist and racist politics of lips all the Kardashian-Jenner sisters have been accused of altering their bodies to look more like black women, in countries that objectify their features but ignore their achievements. There was debate, too, about whether the pout everyone was copying had actually been achieved with lip fillers rather than mere gloss. When she was 17, Jenner denied having had surgery. And, as pressure mounted, she spoke out against the challenge: Im not here to try and encourage people to look like me. Finally, she admitted that, actually, yes, she had had her lips augmented.

But, rather than causing outrage, her admission was read as a kind of vulnerability, a door opening. That summer, she capitalised on the attention by launching Kylie Lip Kits, which sold out within minutes. Last year, Kylie Cosmetics made $360m (275m). And last week, Jenner, now 21, knocked Mark Zuckerberg off the top of Forbes list to become the worlds youngest ever self-made billionaire.

The reaction to this has been noisy and layered, a multi-storey car park of opinion. Its not self-made, its because her sister made a sex tape, claimed Piers Morgan. There was curiosity about how a teenager, even one from an entertainment dynasty such as the Kardashians, could make a billion dollars out of lip gloss.

What her sister did for bums, Jenner has done for lips. That is: focused attention on them, enabled them as fetish objects, promoted the idea that they can be reshaped seasonally. Reporting on the increase in buttock lifts last year, I heard Kims name in every room; similarly, Kylie has been named as the inspiration for a huge rise in women getting lip fillers. A day after she admitted her pout was the result of regular gel injections, one British clinic reported a 70% rise in inquiries. Lip augmentation was the most popular non-surgical cosmetic treatment of 2016 Elle magazine suggested it had become as routine as teeth whitening. Jenners lip kits could be read as an entry-level drug they are marketed as your secret weapon to create the perfect Kylie Lip. A lip best known for being fake. And yet the success of Kylie Cosmetics pivots entirely on Jenners manipulation of social media.

Its the most authentic thing Ive done in my career, Jenner said of her cosmetics line, in an interview with her sister Kim Kardashian. I was insecure about my lips, and lipstick is what helped me feel confident. And I feel like people could see that its authentic to me.

Shes right, despite the fact that the authentic life shes reflecting is a swimming-pooled, white-rugged, celebrity-partied, infinitely broadcast life cushioned by credit cards and the impossibility of failure. Her one-year-old daughter, Stormi, has a net worth of $8m, suggesting that Jenner has learnt from her own mother, who has been managing her childrens careers since they were born. In this family, the day you secure your first sponsorship deal is the day you become an adult. I had such a strong reach before I was able to start anything, Jenner told Forbes of her many millions of followers on Instagram and Snapchat. They would have bought whatever she was selling. Because, of course, what she is really selling is herself.

With every purchase of Coconut lip liner and Yesss Girl gloss, fans buy access to a covetable life, one filled not just with crystal-studded tchotchkes but an ever-moving soap opera of babies and breakups, and theses about body image. Their family is a machine that makes more machines reports on Jenners billionaire status drive readers to her website, and their cosmetics (all production and sales are outsourced she runs the company from her phone) continue to sell out. She was born into a brand, and, using its built-in influencers, has franchised it to glittering success.

The key to Jenner, and the modern business model, is that word authenticity, a word that shifts in meaning according to whose shadow it stands in. For her, it means that, even though her sponsored Instagram posts are valued at $1m each, they read less like ads and more like the check-ins of a girl who would be sharing these selfies even if she were not promoting all-new setting powders. For her, it may not mean relatability: in that same interview with her sister, Kardashian asked what her last text message had said. It was a message to her security guard to buy her apples. One day she will post a swimsuit picture; the next, shell talk about her shyness about her body the push-pull of exposure and its effect, and the commodification of such anxieties, have been part of her life since she was born. This is authenticity, albeit of the 1%.

The machine keeps whirring; her wild success inspires debate. Last year she stopped getting lip fillers. Now that shes made her fortune? tweeted activist Brittany Packnett. Those lip fillers came out. The fake tan disappeared Shell exploit black culture and black people for as long as its profitable, and then return to the comfort of whiteness.

Both Jenner and the worlds richest woman, 65-year-old LOral heir Franoise Bettencourt Meyers, are in the cosmetics industry. Which, for some, undermines any potential message of feminist empowerment. But it is possible to enjoy the expressive potential of makeup and also to wonder if both fortunes rely on female panic, a pursuit of uncatchable perfection. Both also profit from whats described as the lipstick index, the observation that lipstick sales tend to be inversely correlated to economic health.

Jenners business thrives in bad times and benefits from controversy. So, if the critics continue poking, we can expect her billions to double by Christmas.