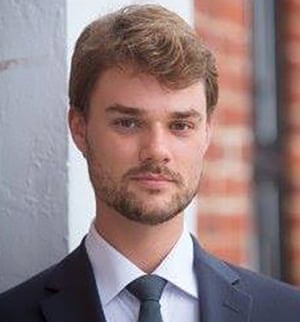 I talked to him last night. He is fine, Ilja Luciak, the freelance journalists father, told the Guardian on Tuesday. There wasnt the chance to talk about his time being interrogated but he was not hurt and he said he was fine He was absolutely OK.

Luciak said he believed his son had been targeted for daring to cover the state of repression the president, Daniel Ortega, has installed since the outbreak in April of a deadly period of unrest that has claimed hundreds of lives and crippled the countrys economy.

The Ortega regime must have fear if they deport someone like Carl David. They really are trying to make work, particularly for foreign journalists, impossible They dont want the situation to be covered, Luciak said.

The Nicaraguan journalist Wilfredo Miranda tweeted a photograph of Goette-Luciak he said the journalist had sent him after landing in the Salvadoran capital on Monday.

Goette-Luciak told Miranda he had been handcuffed and driven, semi-clothed, to Managuas international airport, where he was questioned in a white room for about five hours until he was escorted on to his flight.

One police officer told the journalist he was being deported for allegedly attending illegal protests and disseminating false information. I explained to them that my work was impartial, Goette-Luciak said.

At one point during questioning, Goette-Luciak said an officer came in holding his mobile phone and said that if I didnt give him the password they would torture me and take me to El Chipote [a notorious Managua prison] .

They asked me if I was a CIA agent, Goette-Luciak added.

Goette-Luciak, who will travel to the US on Tuesday, has been covering Nicaraguas political convulsion since April, when protests against unpopular pension changes erupted and spawned a broader nationwide rebellion against Ortega and his vice-president, Rosario Murillo, who is his wife.

Human rights activists say more than 500 people have died since April, the majority at the hands of government security forces or pro-Ortega militias. Nicaraguas government alleges fewer than 200 have been killed and blames much of the violence on US-backed coup-plotters claims rejected by most of the international community, including Nicaraguas Latin American neighbours.

The turbulence has devastated Nicaraguas economy and nascent tourism industry.

Luciak said his son had travelled to Central Americas largest country to work as an anthropologist but started reporting after his friend, the Nicaraguan reporter ngel Gahona, was gunned down in the early days of the upheaval.

Goette-Luciak subsequently wrote about Gahonas killing in the Guardian and reported from the rebel-controlled town of Masaya for the Washington Post. He has also appeared on the BBC to report on the crisis.

His coverage drew the ire of supporters of Ortegas government.

Last week the Committee to Protect Journalists (CPJ) denounced what it called a targeted online campaign of smears and threats against Goette-Luciak. He was accused of being a CIA agent and of trying to undermine the government, and had his home address published online.

The US blogger Max Blumenthal later published a lengthy, insinuation-infused attack on the journalist that admitted there is no evidence that Goette-Luciak is an asset of the CIA or any other US agency.

In his article, Blumenthal, who conducted an unquestioning interview with Ortega this year and has been criticised for his reporting on the Nicaraguan crisis, painted Goette-Luciak as a novice reporter acting as a publicist for a Nicaraguan opposition that was set on regime change.

The journalists father rejected the accusations made against his son. He has no connection whatsoever to the Central Intelligence Agency. He is driven by his love for the Nicaraguan people and nothing else.

Luciak said he believed his sons deportation was about far more than one individual reporter, saying: It is just a story about how difficult it is for journalists to cover Nicaragua.

In August a German correspondent was attacked by armed men while reporting on land-grabs near the town of Chinandega and a Brazilian documentary maker, Emilia Mello, was deported after being detained while filming an anti-government demonstration in the town of Granada.

In an interview with Brazils O Globo newspaper, Mello recalled being handcuffed, repeatedly interrogated and denied access to embassy officials. I knew there was a risk of dying, she said.

A Guardian spokesperson said: We take the safety of our journalists, including freelancers, very seriously and are pleased that Carl David is now safe. We are committed to reporting on important stories which are in the public interest and will continue to report from Nicaragua. We are grateful to the Committee to Protect Journalists and others for speaking out on Carl Davids behalf.