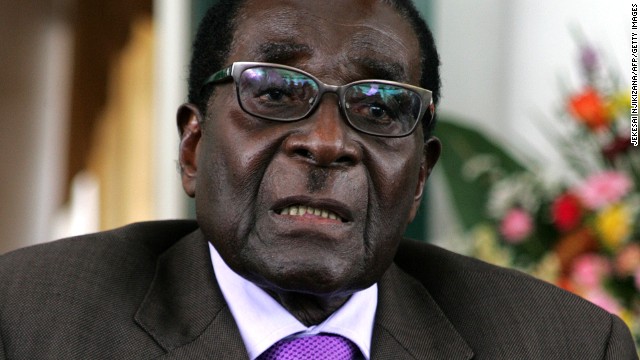 (CNN)Here’s a look at the life of former Zimbabwean President Robert Mugabe.

Birth place: Kutama Mission, Southern Rhodesia (now Zimbabwe)
Birth name: Robert Gabriel Mugabe
Father: Gabriel Mugabe, a carpenter
Mother: Bona Mugabe
Marriages: Grace Marufu (August 17, 1996-present); Sally Hayfron (February 21, 1961-January 27, 1992, her death)
Children: With Grace Marufa: two sons and one daughter; with Sally Hayfron: one son (died at 4 years of age)
Education: University of Fort Hare, B.A., 1951; University of London, L.L.B.
Religion: Roman Catholic
Timeline:
1952-1959 – Teaches school in Southern and Northern Rhodesia and Ghana.
1960-1961 – Returns to Southern Rhodesia and works as publicity secretary for the National Democratic Party.
1963 – Co-founds the Zimbabwe African National Union (ZANU) with Ndabaningi Sithole in Tanzania after having fled Rhodesia.
1964-1974 – Upon returning to Rhodesia is arrested and imprisoned for 10 years. Continues his education while incarcerated and earns university degrees in education, economics, administration and law from the University of London.
1974-1979 – Is released from prison and leads the ZANU-PF, the guerilla movement, from Mozambique.
1977 – Is elected president of ZANU-PF and commander-in-chief of Zimbabwe African National Liberation Army (ZANLA).
April 18, 1980-December 31, 1987 – After February elections, serves as the first prime minister of Zimbabwe. Helps form the Republic of Zimbabwe after British rule of Rhodesia comes to an end.
December 31, 1987 – Is elected by the national assembly to a four-year term after a new constitution replaces the office of prime minister with an executive president.
March 1990 – Is re-elected by popular majority, after a constitutional revision, to a six-year term.
1993 – Threatens to expel white landowners who object to the 1992 Land Acquisition Act permitting the government to force them to give up their land for redistribution to black Zimbabweans.
March 1996 – Is re-elected, in what becomes a one-man contest, after all other opponents drop out days before the election.
2000 – Mugabe begins ordering white farmers to give up their land. Some 4,000 farmers lose their land and Zimbabwe’s agricultural output decreases sharply.
October 15, 2001 – Announces countrywide shift to socialist-styled economy after 12 years of a market-driven one.
2002 – The European Union and the United States impose targeted sanctions on Mugabe and some senior ZANU-PF party members after widespread reports of human rights violations.
March 2002 – Is re-elected to another six-year presidential term amid charges of fraud and “state-sponsored-terrorism.”
June 24, 2002 – Prepares to enforce the redistribution of land from whites to blacks, issues orders to white farmers to stop working their farms and vacate their property, despite the country’s worst famine in 60 years.
December 7, 2003 – Withdraws Zimbabwe from the Commonwealth, a 54-nation organization of Great Britain and her former colonies.
August 2004 – Accusations by Human Rights Watch state that starvation is being used as a tool for the regime’s support among Zimbabweans. Farm output has decreased sharply since Mugabe began his policy of land grabs.
July 16, 2007 – The University of Edinburgh withdraws the honorary degree it awarded Mugabe in 1984 for his services to education in Africa. “The removal of this honorary degree shows the people of Zimbabwe that we recognize their struggle,” Edinburgh University rector Mark Ballard states.
April 2, 2008 – Results of the March 29, 2008, election are released by Zimbabwe’s Electoral Commission and show that Mugabe’s ruling ZANU-PF party has lost control of parliament.
June 12, 2008 – The University of Massachusetts Board of Trustees revokes the honorary law degree it gave to Mugabe in 1986.
June 22, 2008 – Amid election fraud, violence, and arrests targeting his party and its supporters, opposition candidate Morgan Tsvangirai states that he is dropping out of the race, effectively handing the presidency back to Mugabe.
June 25, 2008 – Britain’s Queen Elizabeth II strips Mugabe of an honorary knighthood awarded in 1994 by former Prime Minister John Major.
June 27, 2008 – Mugabe wins the runoff election held in Zimbabwe amid worldwide controversy. He is the only candidate.
June 29, 2008 – Mugabe is sworn in for his sixth term as Zimbabwe’s president.
September 15, 2008 – Mugabe signs a power-sharing deal with political rival Tsvangirai in order to end months of unrest. Mugabe will remain president and Tsvangirai will assume post of prime minister and coordinator of government affairs.
February 11, 2009 – Opposition leader Tsvangirai is sworn in as prime minister of Zimbabwe by Mugabe as part of a new unity government.
February 28, 2009 – Mugabe celebrates his 85th birthday with a lavish party, costing a reported $250,000, despite the fact that Zimbabwe is gripped by an economic and health crisis.
December 17, 2010 – Mugabe threatens to seize all Western-owned investments in Zimbabwe unless their governments remove targeted sanctions imposed on him and his senior party members.
March 18, 2013 – Mugabe arrives in Italy for the inauguration of Pope Francis. Despite the European Union travel ban imposed on him, he is allowed to enter the country on religious grounds.
August 3, 2013 – The head of the Zimbabwe Election Commission announces that Mugabe has retained his position as president with 61.09% of the vote, ending the power-sharing agreement signed in 2008. Challenger Tsvangirai alleges widespread fraud and promises a court challenge.
August 16, 2013 – Tsvangirai announces he has withdrawn a court case challenging President Mugabe’s re-election.
December 9, 2014 – Fires his deputy Joice Mujuru, a few hours after she dismisses allegations that she’d plotted to assassinate Mugabe as “ridiculous.” Zimbabwe’s Chief Secretary to the Cabinet Misheck Sibanda says that Mugabe also fired eight Cabinet ministers.
November 6, 2017 – Mugabe fires Vice President Emmerson Mnangagwa, potentially clearing the way for his wife, Grace Mugabe, to succeed him.
November 14-15, 2017 – Zimbabwe’s military leaders seize control, placing Mugabe under house arrest and deploying armored vehicles to the streets of the capital, Harare.
November 21, 2017 – Mugabe resigns as Zimbabwe’s president, after 37 years of autocratic rule.
July 29, 2018 – On the eve of the presidential election, Mugabe says he will not vote for his old party, Zanu-PF. Mnangagwa of the ruling Zanu-PF party is declared the winner days later.