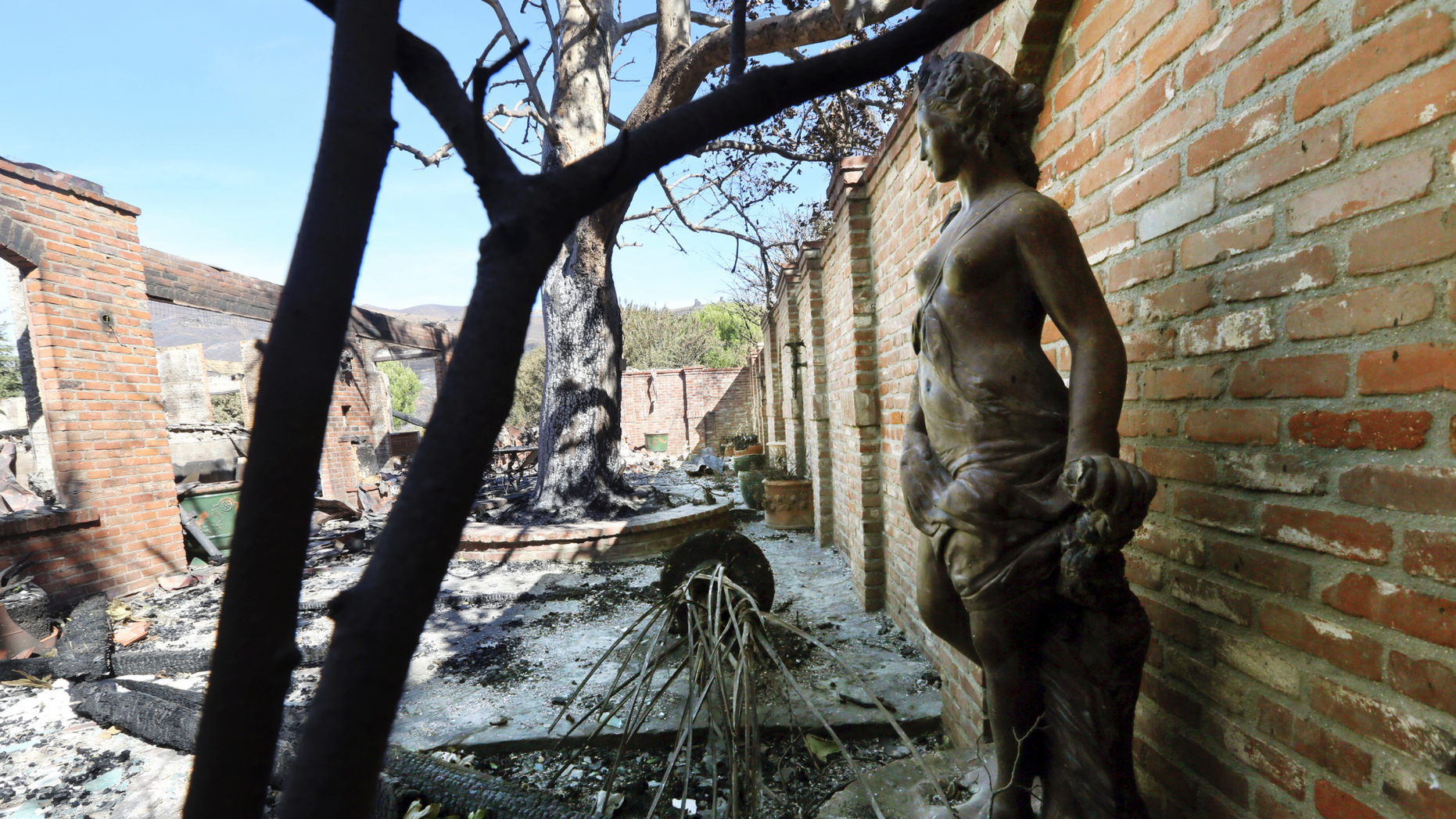 MALIBU, Calif. – Southern California’s huge wildfire roared to life again Tuesday in a mountain wilderness area. But in a sign of significant progress against the blaze, more neighborhoods were reopened to thousands of residents who fled last week.

A massive plume rose suddenly at midmorning in the Santa Monica Mountains near the community of Lake Sherwood, prompting authorities to send numerous aircraft to drop fire retardant and water on the blaze.

Forecasters had warned of ongoing fire danger because of persistent Santa Ana winds, the withering, dry gusts that sweep out of the interior toward the coast, pushing back moist ocean breezes.

But except for an apartment building that burned overnight in coastal Malibu, there was little sign of fire activity elsewhere in the vast fire zone west of Los Angeles.

Officials tempered optimism with caution, saying there were hotspots and pockets of unburned vegetation.

“We are not out of the woods yet. We still have some incredibly tough conditions ahead of us,” Ventura County Fire Chief Mark Lorenzen said.

The death toll from the Woolsey fire stood at two — a pair of adults found last week in a car overtaken by flames. They have not been identified.

The number of homes and other structures destroyed had reached 435. Damage assessments were continuing, with crews having to gain access to canyon areas on foot.

Residents who stayed behind in coastal communities that were cut off by road closures were getting supplies by boat. Gas, food, baby wipes and horse pellets were among the items brought ashore in the Paradise Cove area of Malibu.

Large boats arrived from Redondo Beach, about 25 miles (40 kilometers) to the south. Supplies were unloaded onto smaller boats, jet skis and even surf boards. Some residents donned wetsuits and swam ashore with cases of water and beer.

Miley Cyrus and Liam Hemsworth lost their Malibu home in the wildfire and are donating $500,000 to The Malibu Foundation through Cyrus’ charity, The Happy Hippie Foundation.

A statement from the couple says they “are very grateful to be safe along with their animals.”

The fire has grown to nearly 152 square miles (393 square kilometers), but containment also increased to 40 percent.

The fire has burned more than 80 percent of National Parks Service land in the Santa Monica Mountains National Recreation Area.

Authorities lifted evacuations Tuesday in several neighborhoods, and other areas have been repopulated since the weekend. Tens of thousands of people remained under evacuation orders, down from a high of as many as 250,000.

The area has not seen such a firestorm since the Old Topanga fire of 1993. The firestorm has left an array of hazards, including trees ready to fall, downed power lines, toxins, water main and gas leaks, and other destroyed infrastructure.

“We want to get you home but more important we want you to be safe,” McDonnell said.’

Forecasts called for the Santa Ana winds to lighten Wednesday and Thursday. A forecast of possible rain next week would help firefighters but also raised the prospect of potential mud flows, Osby said.

At least 42 people were confirmed dead in a wildfire that obliterated the Northern California town of Paradise , making it the deadliest wildfire in recorded state history. The search for bodies continued.

The cause of the Southern California fires remained under investigation.

Southern California Edison said last week that it reported to the California Public Utilities Commission “out of an abundance of caution” that there was an outage on an electrical circuit near where the fire started Thursday but there was no indication its equipment was involved in the fire reported two minutes after the outage.

Downed power lines and blown transformers have been blamed for several of the deadly fires that have burned in recent years.