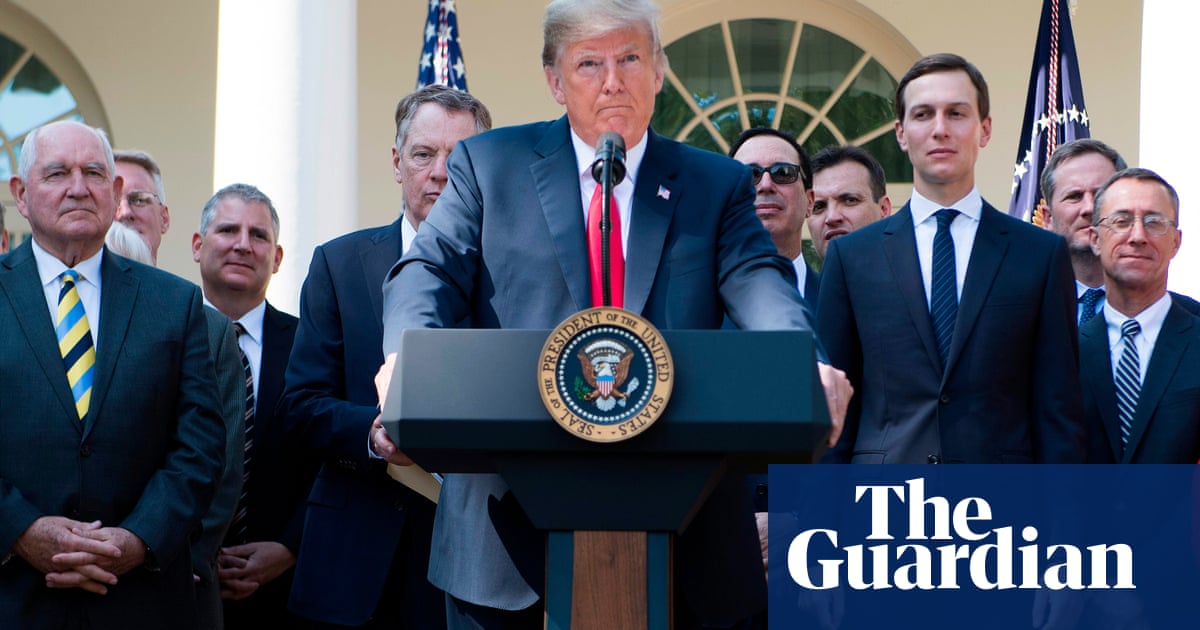 The US, Canada and Mexico have reached a deal to revamp the North American Free Trade Agreement (Nafta), ending months of bitter dispute between the worlds largest economy and its closest neighbours.

Donald Trump declared the United States-Mexico-Canada Agreement (USMCA) the new name for the worlds second-biggest economic bloc behind the European Union a wonderful new trade deal, which came through an 11th-hour agreement late on Sunday.

In typically bombastic language, the US president used a press conference outside the White House to say the agreement was truly historic news for our nation and the world.

He tweeted: It is a great deal for all three countries, solves the many deficiencies and mistakes in Nafta, greatly opens markets to our farmers and manufacturers, reduces trade barriers to the US and will bring all three great nations together in competition with the rest of the world.

The agreement ends the simmering trade standoff over Nafta started by Trump, who had labelled the 1994 agreement the worst trade deal ever made as part of his pitch to become president. It comes ahead of the US midterm elections next month, which could be challenging for the president.

The deal lowers the risk of higher import tariffs on Mexican and Canadian goods arriving in the US, seen as a threat from the Trump White House used to secure trade concessions. Analysts had warned the tariffs threatened to curtail economic growth and the creation of new jobs across the region, although Trump said the USMCA deal would not have been done without them.

Trump had set a deadline of Sunday to get Canada to agree to a deal, after the US reached an earlier bilateral agreement with Mexico, with potential to exclude Canada from Nafta.

Stock markets rallied on Monday as news of the agreement spread. Shares jumped on Wall Street with the Dow Jones Industrial Average adding more than 250 points, while there were also gains on European exchanges. The Canadian dollar and Mexican peso made gains on foreign exchanges.

The revamped deal has 34 chapters and governs more than $1tn in trade between the three countries. It must still win approval from the US Congress, which is unlikely to happen until next year.

Despite progress made to overhaul Nafta, Trump still faces several other trade disputes around the world, not least with China, where the president has slapped a tariff on $200bn on Chinese imports. Trump also said he could soon impose US import tariffs on EU cars, widening the global trade dispute further.

Whats in the deal?

The most significant difference between Nafta and the USMCA may be as simple as the rebranding exercise itself, which some observers said would hand Trump political capital, regardless of its substance.

Beyond that, there are meaningful changes for the car industry. From 2020, cars must have 75% of their parts manufactured in Canada, Mexico or the US to qualify for zero import tariffs a substantial jump from the current 62.5% requirement.

At least 40% of a car made in North America must also be made by a worker earning at least $16 an hour, which is likely to benefit the US and Canada most.

Another element of the deal will exempt Mexican and Canadian cars from any future US automotive tariffs up to certain import quotas.

Elsewhere, US farmers will get greater access to Canadas dairy market through an increased quota on foreign imports.

Canada has long held high tariffs on most dairy products, leading to higher prices than in the US, while Trump has argued that the US industry should be able to sell more products to its northern neighbour.

One surprise area where there has been no change is that US tariffs on Canadian and Mexican steel and aluminium will remain for now, even though this was seen as a key barrier to a deal.