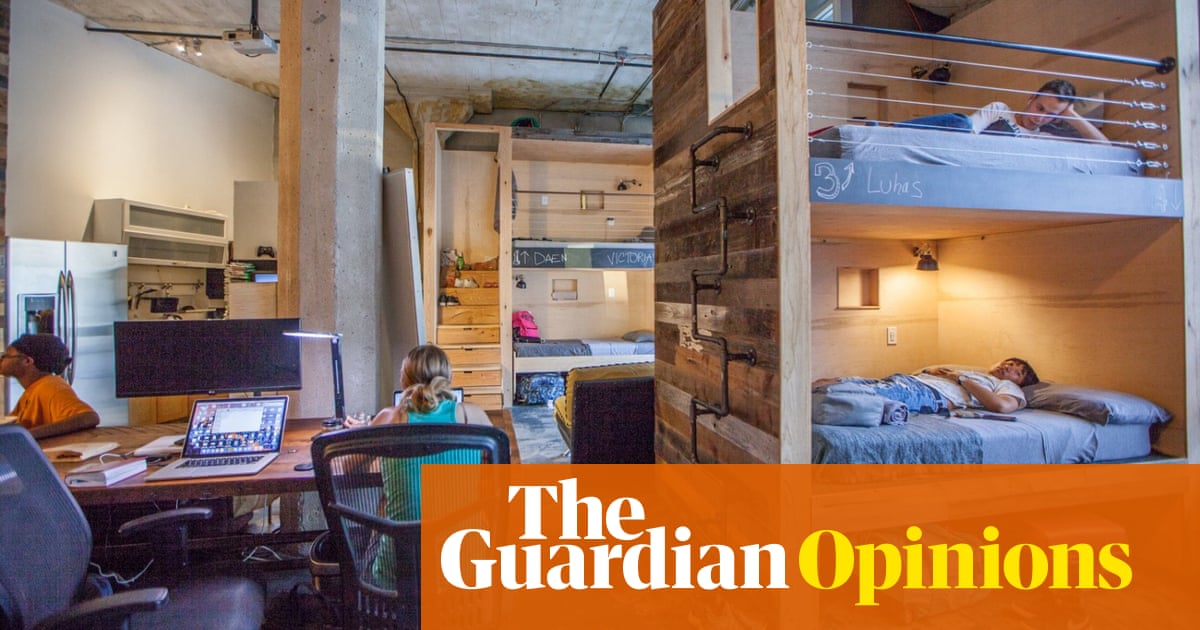 PodShare, a US startup that provides co-living accommodation, claims to offer the change the industry needs. In fact, it is part of the problem, writes Arwa Mahdawi

Silicon Valley has rebranded the bunk bed. It is called a pod now and a startup called PodShare is renting them out in San Francisco and Los Angeles for $1,200 (960) a month. Yep, you read that right: you can now rent a bunk bed, in a house full of other bunk beds, for $1,200 a month. That price includes cereal, toilet paper and a personal TV. It doesnt include privacy. But, hey, we live in a post-privacy world.

Perhaps this concept sounds familiar; perhaps you are used to calling this sort of dorm-style living a hostel. Well, please dont. Dont call it a boarding house, either. Or a tenement. Or a scene straight out of the dystopian movie Sorry to Bother You. Nope, PodShare would rather you called it co-living. Elvina Beck, the 34-year-old founder, says the company follows a subscription housing model that provides flexible and affordable housing in desirable neighbourhoods. PodShare is a byproduct of high rents, Beck explains on the companys website. Homelessness is on the rise, and a large part of that is very strict regulations that make it almost impossible to provide affordable housing PodShare believes that we can repurpose underutilised spaces in a safe way to allow a type of new communal housing, because housing not only needs to change, it HAS to evolve.

Beck is right: housing has to evolve and not just in the US. Things are dire in the UK, too. A 2018 report by the Resolution Foundation, for example, found that one in three British millennials will never own a home. Britains housing crisis seems only to be getting worse; a recent analysis of data found that no rooms were available for private rent in many parts of London and Greater Manchester that were within the budget of people on housing allowance.

But while housing has to evolve, I am not sure rebranding boarding houses is the most desirable way for it do so. I am not alone in this view. PodShare has been around for several years, but it only started getting a lot of attention when it recently entered San Francisco and a CNN article about it went viral. The internet blew up with comments from aghast readers and there was a backlash against the company. While some think PodShare represents all that is wrong with late capitalism, others think it is stealthy socialism. When I called PodShare to talk to them, a man called Praveen in customer service told me he had just taken an angry phone call from someone saying we were promoting communism; he said his ancestors didnt fight against the Russians for this. Praveen, who has been living in a Hollywood PodShare for the past five months, also told me he doesnt get paid for his job. He volunteers 13-hour days, three and a half days a week, in return for a free bunk bed. I guess its a fair trade, he said.

What is most problematic about PodShare is that it isnt a one-off; it is part of a broader trend in which poverty is repackaged in a way that makes it seems innovative and cool. Tiny spaces have been spruced up and rebranded as co-living and micro-living. Landlords have been rebranded as entrepreneurs. We keep being told it is liberating to live without things; that it is great to live in a sharing economy where we pay for access instead of ownership. While that may seem liberating and modern on the surface, it is not that liberating or modern when you realise it is just rentier capitalism 2.0.

Arwa Mahdawi is a Guardian columnist