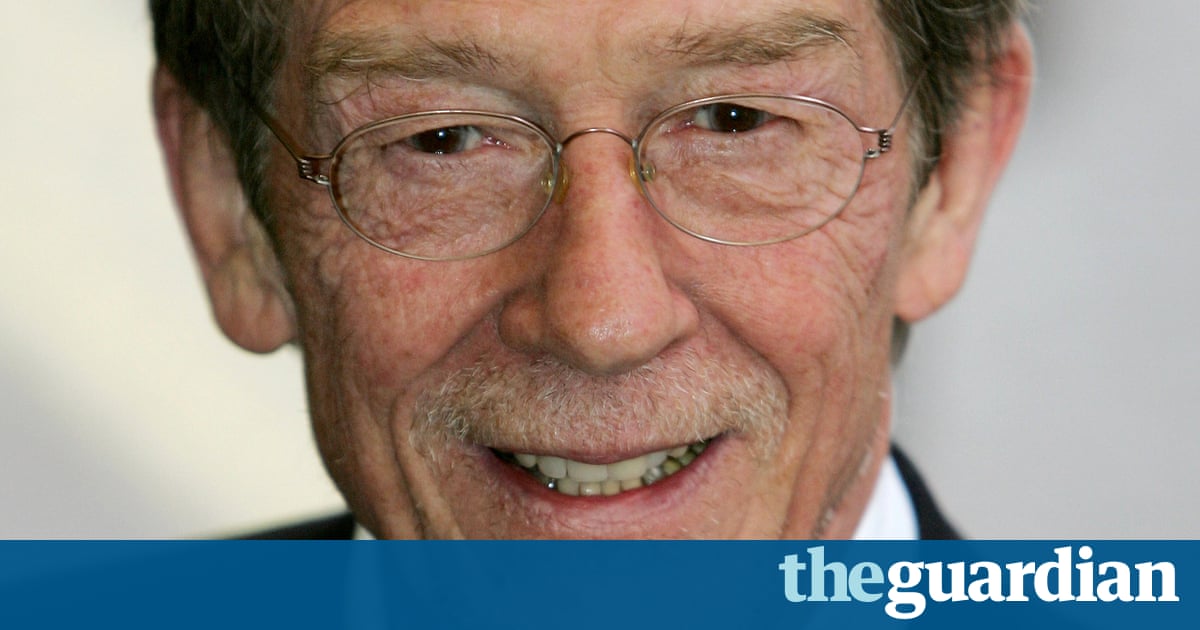 Few British performers of recent years are held in just as much fondness as John Hurt, who has died aged 77. That fondness isn’t only due to his lifestyle that is wild he was a hellraising chum of Peter OToole, Oliver Reed and Richard Harris, and was married four times or even his chain of performances as vulnerable, fragile or damaged characters, though that was definitely a variable. There is something about his innocence, openheartedness and his lovely speaking voice that made him immediately attractive.

As he aged, his face grown more creases and folds in relation to the old map of the Indies, inviting comparisons using the well-known lived-in faces of WH Auden and Samuel Beckett, in whose evocative Krapps Last Tape he gave a certain solo performance near the ending of his career. One critic said he could package an entire universe that was mental to the twitch of an eyebrow, a sardonic slackening of the mouth. Hurt himself said: What I’m now, the performer, the guy, is a blend of all that’s happened.

For theatregoers of my generation, his pulverising, hysterically amusing performance as Malcolm Scrawdyke, leader of the Party of Dynamic Erection at a Yorkshire artwork school, in David Halliwells Little Malcolm and His Struggle Against the Eunuchs, was a totemic performance of the mid-1960s; another was David Warners Hamlet, and both performers appeared in the 1974 movie version of Little Malcolm. The play lasted just two weeks in the Garrick Theatre (I saw the closing Saturday matine), but Hurts performance was already a minor fad, and one gathered by the Beatles and Laurence Olivier.

He became an overnight sensation with all people at large as Quentin Crisp the self confessed stately homo of England in the 1975 television film The Naked Civil Servant, directed by Jack Gold, playing the crazy, initial and rebellious aesthete whom Hurt had first struck as a naked model in his painting courses at St Martins School of Art, before he trained as a performer.

Crisp called Hurt my representative here on Earth, paradoxically claiming a divinity at odds with his lowlife louche- poverty and ness. But Hurt, a glowing vision of ginger quiffs and curls, using a voice kippered in gin and as studiously inflected as a deadpan combination of Nol Coward, Coral Browne and Julian Clary, in a way propelled Crisp to the stars, and definitely to his transatlantic recognition, a journey summarised when Hurt recapped Crisps life in An Englishman in New York (2009), 10 years after his departure.

Hurt said some people had informed him that his career would be ended by playing Crisp. Rather, it made everything possible. Within five years he previously appeared in four of the very remarkable pictures of the late 1970s: Ridley Scotts Alien (1979), the brilliantly played scifi horror movie in which Hurt from whose belly the creature burst was the very first casualty; Alan Parkers Midnight Express, that he won his first Bafta award as a drug addicted convict in a Turkish torture penitentiary; Michael Ciminos contentious western Heavens Gate (1980), now a cult classic in its entirely restored format; and David Lynchs The Elephant Man (1980), with Anthony Hopkins and Anne Bancroft.

In the latter, the deformed circus draw who becomes a celebrity in Victorian society and medicine, as John Merrick, Hurt won Lynchs view and a second Bafta award which he was the finest performer on the planet. A gruesome external look there were 27 transferring bits in his face mask was infused by him; he spent nine hours in makeup with a profoundly moving, humanist quality. He followed up using a tiny part Jesus in Mel Brookss History of the World: Part 1 (1981), the film where the server in the Last Supper says, Are you all together, or can it be different cheques?

Hurt was a celebrity freed of all tradition in his pick of characters, and he lived his life so. Produced in Chesterfield, Derbyshire, he was the youngest of three kids of a Church of England vicar and mathematician, the Reverend Arnould Herbert Hurt, and his own wife, Phyllis (ne Massey), an engineer with the enthusiasm for recreational dramatics.

Following a low-down education at St Michaels in Sevenoaks, Kent (where he explained he was sexually abused), as well as the Lincoln grammar school (where he played Lady Bracknell in The Importance of Being Earnest), he rebelled as an art student, first at the Grimsby art school where, in 1959, he won a scholarship to St Martins, before training at Rada for a couple of years in 1960.

He made a stage debut that same year using the Royal Shakespeare Company at the Arts, playing a semi-psychotic teen thug in Fred Watsons Infanticide in the House of Fred Ginger and then joined the cast of Arnold Weskers national service play, Chips With Everything, in the Vaudeville. Still in the Arts, he was Len in Harold Pinters The Dwarfs (1963) before playing the title role in John Wilsons Hamp (1964) at the Edinburgh Festival, where critic Caryl Brahms noticed his uncommon skill and blessed quality of simplicity.

This is a more comfortable, free-spirited time in the theater. Hurt remembered rehearsing with Pinter when silver salvers stacked with gins and tonics, ice and lemon, would arrive at 11.30 each morning as part of the stage management routine. On receiving a notice that was impolite from your prominent Daily Mail critic Peter Lewis, he wrote, Dear Mr Lewis, Whooooops! Yours truly, John Hurt and received the answer, Dear Mr Hurt, thanks for dull although brief letter. Yours truly, Peter Lewis.

After Little Malcolm, he played leading parts together with the RSC in the Aldwych notably in David Mercers Belchers Luck (1966) and as the madcap dadaist Tristan Tzara in Tom Stoppards Travesties (1974) together with Octavius in Shaws Man and Superman in Dublin in 1969 and a significant 1972 resurrection of Pinters The Caretaker in the Mermaid. But his stage work within the next 10 years was almost nonexistent as he followed The Naked Civil Servant with a different pyrotechnical television performance as Caligula in I, Claudius; Raskolnikov in Dostoevskys Crime and Punishment and the Fool to Oliviers King Lear in Michael Elliotts 1983 television film.

His first huge film had been Fred Zinnemanns A Man for All Seasons (1966) with Paul Scofield (Hurt played Richard Rich) but his first big screen performance was an unforgettable Timothy Evans, the innocent framed casualty in Richard Fleischers 10 Rillington Place (1970), with Richard Attenborough as the black landlord and killer John Christie. He promised to have made 150 films and persisted in playing with those he called the folks that were unloved like us, the inside out folks, who live their lives as an experiment, much less a convention. Even his Ben Gunn-like professor in Steven Spielbergs Indiana Jones as well as the Kingdom of the Crystal Skull (2008) met into this group, though much less resoundingly, maybe, as his quivering Winston Smith in Michael Radfords excellent Nineteen Eighty-Four (1984); or as a prissy weakling, Stephen Ward, in Michael Caton-Joness Scandal (1989) about the Profumo affair; or again as the solitary writer Giles DeAth in Richard Kwietniowskis Love and Death on Long Island.

His later, unpredictable theater performances contained a fantastic Trigorin in Chekhovs The Seagull in the Lyric, Hammersmith, in 1985 (with Natasha Richardson as Nina); Turgenevs incandescent idler Rakitin in a 1994 West End production by Bill Bryden of A Month in the Country, playing a brilliant duet with Helen Mirrens Natalya Petrovna; and another memorable match with Penelope Wilton in Brian Friels exquisite 70-minute doodle Afterplay (2002), in which two alone Chekhov characters Andrei from Three Sisters, Sonya from Uncle Vanya find reciprocal consolation in a Moscow caf in the 1920s. The play originated, like his Krapp, in the Gate Theatre in Dublin.

His last screen work comprised, in the Harry Potter franchise, the first, Harry Potter and the Philosophers Stone (2001), and last two, Harry Potter and the Deathly Hallows Parts One and Two (2010, 2011), as the kindly wand-maker Mr Ollivander; Roland Joffs 1960s remake of Brighton Rock (2010); as well as the 50th anniversary television version of Dr Who (2013), playing a lost embodiment of the name character.

Due to his identifying, virtuosic vocal characteristics was that what a brandy-injected fruitcake seems like, or peanut butter spread having a serrated knife? he was constantly in demand for voiceover shows in animated films: the heroic bunny leader, Hazel, in Watership Down (1978), Aragorn/Strider in Lord of the Rings (1978) and also the Narrator in Lars von Triers Dogville (2004). In 2015 he took the Peter OToole stage character in Jeffrey Bernard is Unwell for BBC Radio 4. He’d foresworn booze for several years not because he was bored by it, although he explained.

Harm sister was a teacher in Australia, his brother a convert to Roman Catholicism as well as a monk and writer. After his first brief marriage to the performer Annette Robinson (1960, divorced 1962) he resided for 15 years in County Wicklow using the French model Marie-Lise Volpeliere Pierrot. She was killed in a riding accident in 1983. In 1984 he married, second, a Texan, Donna Peacock (divorced in 1990), residing with her to get a period in Nairobi before the relationship came under stress from his drinking and her dalliance having a gardener. With his third wife, Jo Dalton (wed in 1990, divorced 1995), he had two sons, Nicolas and Alexander (Sasha), who live him, as does his fourth wife, the performer and producer Anwen Rees-Myers, whom he wed in 2005 and with whom he lived in Cromer, Norfolk. Hurt given a Bafta lifetime achievement award in the year 2012 was made CBE in 2004 and knighted in the New Years honours list of 2015.