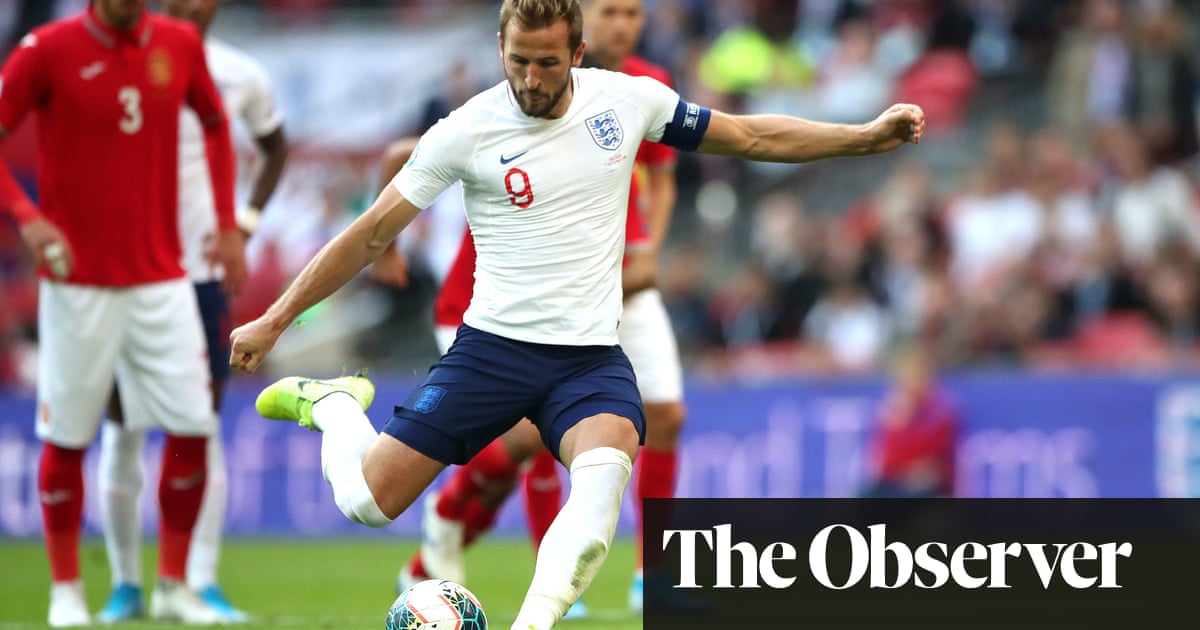 Naturally, Gareth Southgate would never be so presumptuous, three games into Englands qualifying group, to assert that his teams participation in Euro 2020 is virtually assured. The rest of us, however, can probably start to consider it a fait accompli. An argument could even be made that they were virtually guaranteed a place as soon as the draw was made.

Their latest victory certainly left the impression that there is a drowsy inevitability about Englands progression. Harry Kane added another three goals to his portfolio, scoring the second hat-trick of his international career. England have accumulated 14 goals from three qualifiers and Raheem Sterling has scored seven times in his past seven internationals.

Sterling, you may recall, once went 27 games for England without a goal over a three-year period which can feel perplexing, to say the least, now he is established as such a formidable scorer.

Ultimately, though, this victory will mostly be remembered for the contribution of the man who wandered on to the pitch at full-time to collect the ball as a souvenir. Two of Kanes goals were penalties and the other originated from some obliging goalkeeping but he will not worry too greatly about that. Wembley, once again, felt like a happy place. Mason Mount made his debut as a substitute and England will head to Southampton for their next assignment, Tuesdays game against Kosovo, optimistically thinking they can maintain their immaculate record in Group A.

It can probably be assumed Southgate will make considerable changes, potentially meaning Trent Alexander-Arnold, Jadon Sancho and Ben Chilwell returning to the starting lineup. He opted for a more experienced team here with Michael Keane and Declan Rice the only players in the XI with fewer than 10 caps. Kane was flanked by Sterling and Marcus Rashford in attack and the onus was certainly on the team to go forward bearing in mind the adventurous 4-12-3 system usually favoured by Pep Guardiola at Manchester City.

Could they play like City? Well, not quite. But then again, the Bulgarian goalkeeper, Plamen Iliev, was hardly Ederson-esque in the way he inadvertently contributed to England taking the lead midway through the first half. Iliev was guilty of a mix of carelessness and overindulgence as he exchanged passes inside his own penalty area with one centre-half and shaped to play the ball out to his left, where another of the defenders, Vasil Bozhikov, had peeled off.

Sterling and Kane were loitering with intent and the goalkeeper got the pass horribly wrong. Sterling, showing wonderful anticipation, nipped in to steal the ball, spun beyond Bozhikov and cut the ball back to Kane, who turned in a relatively simple finish from six yards.

It was Kanes 23rd goal for England on the evening of his 40th cap, moving him ahead of Tommy Lawton and Peter Crouch into joint 15th, with Stan Mortensen, on the all-time list of England international goalscorers. The next one put Kane alongside Geoff Hurst and his second penalty left him one short of Bryan Robson, albeit still not quite halfway towards Wayne Rooneys record of 53. For what it is worth, Kane overtook Marco van Bastens 24 for the Netherlands.

Until the mistake from Iliev, England had found it difficult to get behind a packed defence. Bulgaria looked what they were: a team 60th in Fifas world rankings, sandwiched between Mali and Burkina Faso, but it quickly became clear they were intent on denying space for the side that is 56 places higher. They also had a couple of first-half chances on the breakaway without really giving the impression that they could put England under any concerted pressure. The mood was genial, the sun was flickering through the gaps in the most vertiginous parts of the stadium and by half-time a sellout crowd could have been forgiven for expecting more goals in the second 45 minutes.

They got what they wanted, too, though the first opportunity of the next half fell to Wanderson, a naturalised Brazilian making his debut in Bulgarias No 9 shirt. Jordan Pickford blocked the shot and within a couple of minutes Rashford had raced upfield, enticing the raw challenge from Nikolay Bodurov that led to the Italian referee Marco Guida pointing to the penalty spot.

Kane reinforced his reputation as a brilliant penalty-taker, aiming it high and to the left of the goalkeeper, and the captain was also prominently involved again in the 55th minute, when each of Englands front players played a part in the third goal.

That one originated, again, from a mistake in the defence. This time it was Bodurov misplacing a pass. Kanes interception immediately left Englands opponents short at the back and when Rashford returned the ball to his teammate inside the penalty area it was tempting to think Kane would let fly at goal. Instead, he clipped the ball across the goalmouth and Sterling was running in to add the final touch with his knee.

For Bulgaria, the game was now an exercise in damage limitation. Yet their accident-prone defence had badly lost its shape by the time the substitute Kristian Dimitrov fouled Kane to give away the next penalty. Kane aimed it the other way this time and the hat-trick was completed with power and precision.