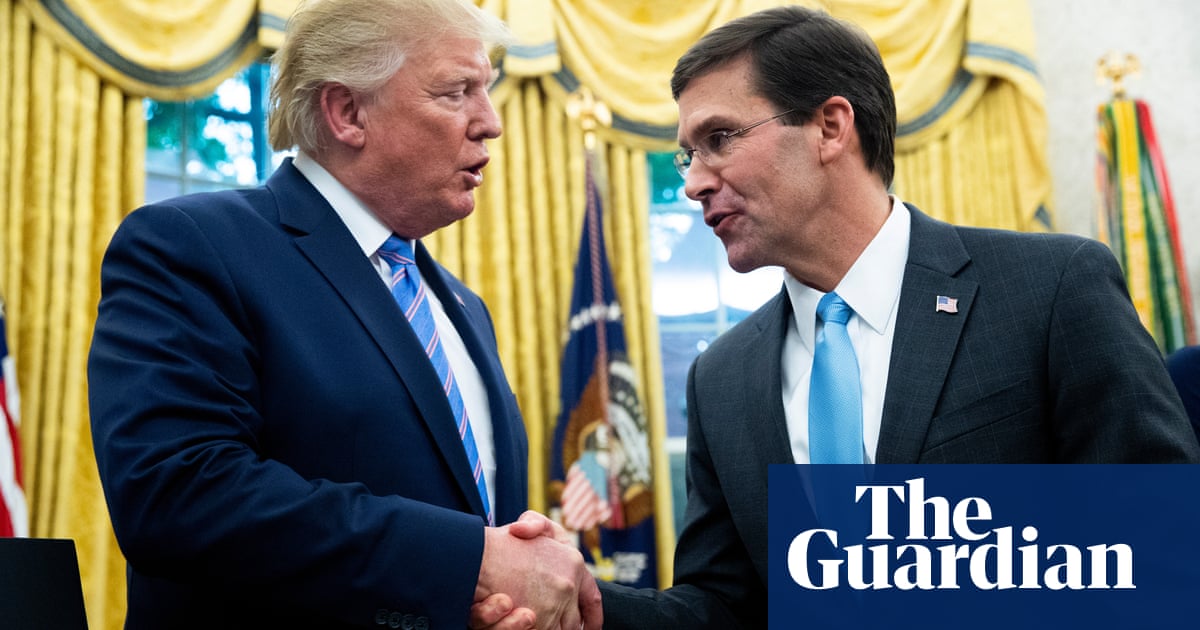 Secretary of defense will do everything we can before Tuesday deadline but cautions: White House has a say as well

Donald Trumps secretary of defense said on Sunday the Pentagon would cooperate with the Houses impeachment inquiry, while cautioning that Trump may try to restrict his disclosure of information.

Mark Esper said in two interviews his department would work to comply with a subpoena from committees seeking records relating to the withholding of US military aid to Ukraine.

We will do everything we can to cooperate with the Congress, Esper said on CBSs Face The Nation.

We will do everything we can to respond to their inquiry, he said on Fox News Sunday.

But Esper warned on Fox News Sunday that Trump and other officials may yet create complications for the compliance before Tuesdays deadline for him to respond.

I dont know what restrictions we may have internally in regard to releasing them, Esper said. The White House has a say on the release of documents as well.

Democrats are investigating whether Trump withheld military aid worth $250m for Ukraine as leverage while urging its leader to investigate unfounded allegations of corruption against the son of former vice-president Joe Biden, the Democratic frontrunner to face Trump in next years election.

The Democratic chairmen of three House committees sent a subpoena to Esper on 7 October, giving him until 15 October to respond and warning that failing to do so would constitute evidence of obstruction.

The day after the subpoena was sent to the Pentagon, Trumps White House counsel, Pat Cipollone, sent senior Democrats an extraordinary eight-page letter that made several sweeping and false claims about the impeachment inquirys legal basis.

Declaring the inquiry to be illegitimate, Cipollone wrote that Trump cannot permit his administration to comply with the inquiry and the executive branch cannot be expected to participate in it.

The impeachment inquiry began after a CIA whistleblower told the watchdog for the US intelligence agencies Trump withheld the delivery of military equipment to pressure Ukraines government to investigate Biden and his son, Hunter.

The White House then released a partial transcript of a 25 July telephone call between Trump and President Volodymyr Zelenskiy, which confirmed that Trump urged Zelenskiy to look into the Bidens and a conspiracy theory related to Russias interference in the 2016 election.

Trump denies there was a quid pro quo, despite his own White House transcript showing that when Zelenskiy raised the US military assistance, Trump said: I would like you to do us a favour though.

The impeachment inquiry has also obtained text messages sent between top US officials in the region. In one message, a senior US diplomat in Ukraine, William Taylor, told US ambassador to the EU Gordon Sondland: I think its crazy to withhold security assistance for help with a political campaign.

In a potential blow to Trump, Sondland previously considered a loyalist is reportedly preparing to testify that Trump possibly did consider the Biden investigation and delivery of the aid to be a quid pro quo.

The Washington Post reported that the ambassador will tell Congress this week that he worked to persuade Ukraine to announce an inquiry into an energy company where Hunter Biden worked, and dangled a meeting at the White House for Zelenskiy as an incentive.

Sondland reportedly intends to claim he did not realise the company was linked to the Bidens.

It was a quid pro quo, but not a corrupt one, the Post reported a person familiar with Sondlands testimony had said in summarising Sondlands position.