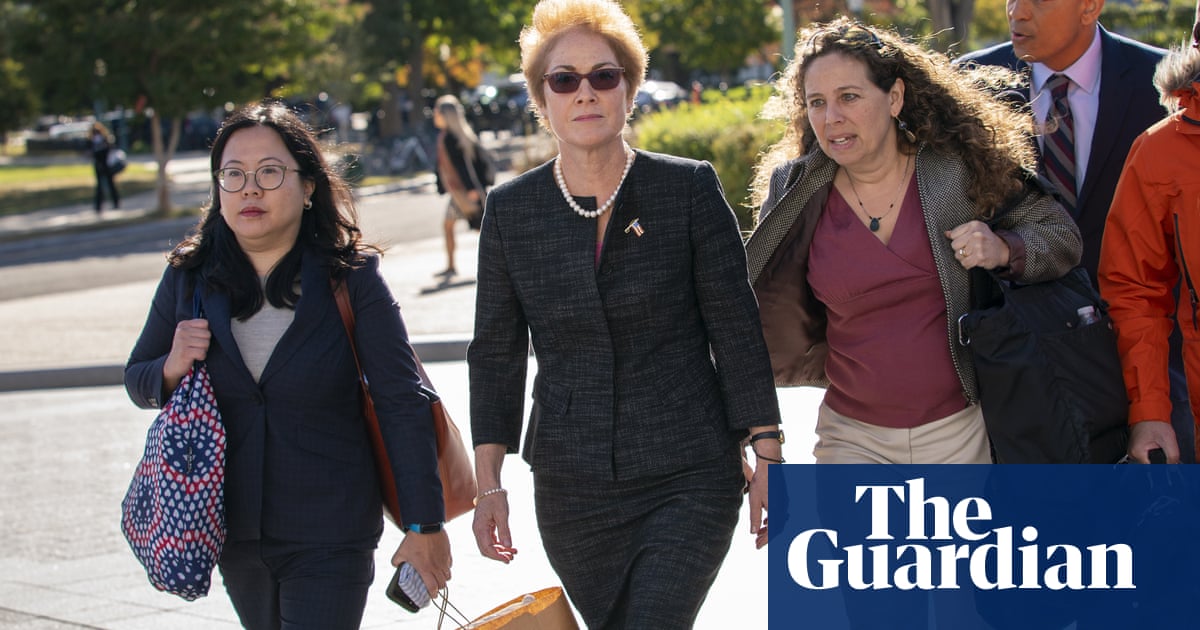 The former US ambassador to Ukraine, whose abrupt departure has become a focus of impeachment proceedings against Donald Trump, has told congressional investigators that the president personally pressured the state department to recall her as part of a concerted campaign against her.

At a closed-door hearing on Capital Hill, Marie Yovanovitch delivered a stinging denunciation of diplomacy under the Trump administration, saying the state department was being attacked and hollowed out from within.

Yovanovitch said she was incredulous to be removed from her post in May after a decision based on unfounded and false claims by people with clearly questionable motives. She said that she had been told by the deputy secretary of state, John Sullivan, that even though she had done nothing wrong Trump had been pushing for her departure for months.

Yovanovitch, a career diplomat who has served as ambassador under three presidents to three countries, defied a state department instruction not to speak to impeachment investigators. Her decision to appear could trigger a wave of testimony by disaffected officials and the collapse of the administrations efforts to silence them.

As she was speaking, reports emerged that more whistleblowers were coming forward in the growing scandal over Trumps efforts to persuade foreign leaders to deliver compromising information about his political rivals.

The national security councils former senior director for Europe and Russia, Fiona Hill, is due to speak to the House committees on Monday. The current ambassador to the European Union, Gordon Sondland, who is also at the centre of the impeachment row over Trumps conduct towards Ukraine, has said he will appear on Thursday, also in defiance of the state department gag.

On Friday afternoon, Adam Schiff, the chairman of the House intelligence committee which is leading the impeachment inquiry, said the committee would accelerate its efforts.

We expect to announce additional testimony from relevant witnesses in the coming days and remain prepared to compel testimony through duly authorized subpoenas as appropriate, Schiff wrote in a letter to other members of the committee.

In her written deposition to Congress, Yovanovitch gave a description of the events surrounding her surprise removal from her post in Kyiv, weeks after having been told in March that the state department wanted her to extend her posting till 2020.

I was then abruptly told in late April to come back to Washington from Ukraine on the next plane, Yovanovitch wrote. You will understandably want to ask why my posting ended so suddenly. I wanted to learn that too, and I tried to find out. I met with the deputy secretary of state who informed me of the curtailment of my term. He said that the president had lost confidence in me and no longer wished me to serve as his ambassador.

Yovanovitch said the deputy secretary of state, John Sullivan, added that there had been a concerted campaign against me, and that the department had been under pressure from the president to remove me since the summer of 2018.

He also said that I had done nothing wrong and that this was not like other situations where he had recalled ambassadors for cause, Yovanovitch said.

Although I understand that I served at the pleasure of the president, I was nevertheless incredulous that the US government chose to remove an ambassador based, as best as I can tell, on unfounded and false claims by people with clearly questionable motives.

The former ambassador, who since her removal has been on academic sabbatical at Georgetown University, went on to talk more generally about the crisis of morale at the state department. She said: I have served this nation honorably for more than 30 years.

We repeatedly uproot our lives, and we frequently put ourselves in harms way to serve this nation. And we do that willingly, because we believe in America and its special role in the world. We also believe that, in return, our government will have our backs and protect us if we come under attack from foreign interests, she said.

That basic understanding no longer holds true. Today, we see the state department attacked and hollowed out from within.

Trump is being investigated for abusing his office, to force the Ukrainian president, Volodymyr Zelenskiy, to investigate Trumps political opponent, former vice-president Joe Biden, and his son Hunter, who had business dealings in Ukraine.

The drive to collect compromising material was led by Trumps personal lawyer, Rudy Giuliani, and according to former officials, one of the reasons Yovanovitch was dismissed was because she refused to help Giuliani to collect information outside official channels. Giuliani has since been one of her fiercest critics.

The former ambassador said she could only recall contact with Giuliani on three occasions, none of which had anything to do with the matters under investigation.

I do not know Mr Giulianis motives for attacking me. But individuals who have been named in the press as contacts of Mr Giuliani may well have believed that their personal financial ambitions were stymied by our anti-corruption policy in Ukraine, she said.

Two of Giulianis associates, who had been helping him find material on the Bidens, were arrested on Wednesday night on election financing charges. Lev Parnas and Igor Fruman were indicted for conspiracy, and making false statements in a scheme to funnel foreign money into Trumps campaign.

Yovanovitchs damning testimony is a further sign of the deepening damage the Ukraine scandal is having on the functioning of the administration.

On Friday, Michael McKinley, one of secretary of state Mike Pompeos senior advisers, resigned, reportedly because of disillusion over Yovanovitchs treatment.

The state department has not responded to any press queries about Ukraine in recent days, and Pompeo has avoided the media, and Washington. On Friday, with the Turkeys Syria invasion in full force, and the Ukraine issue dominating the news, the secretary of state, who is thought to have ambitions of a Senate run, was in Nashville, Tennessee, talking to Christian ministers about mental health.