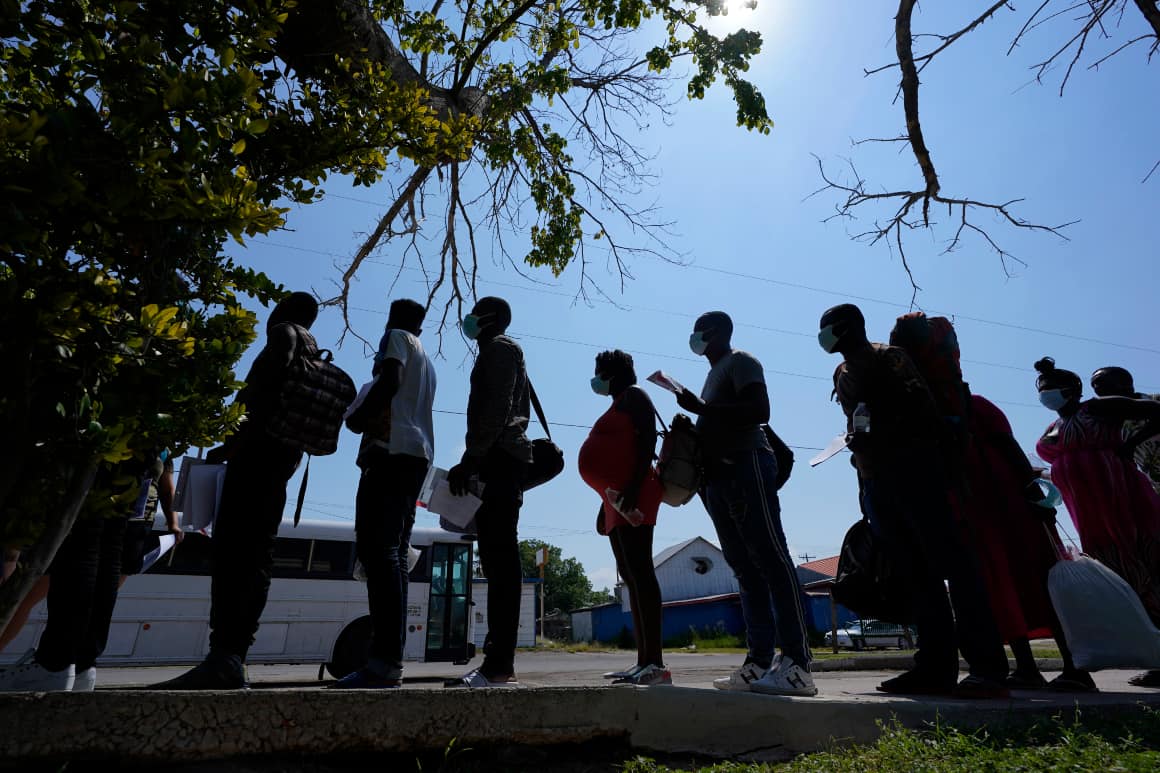 A Justice Department attorney argued Tuesday for American immigration officials’ authority to limit the number of asylum-seekers allowed to cross into the U.S. from Mexico each day, even as President Joe Biden’s administration is attempting to distance itself from the Trump administration’s policy imposing caps on asylum applicants at border ports of entry.

During a hearing before a federal judge in San Diego, immigrant rights advocates squared off with a federal government attorney sent to advance the somewhat dissonant argument renouncing the prior administration’s approach while preserving the current one’s legal right to reinstate it.

Alexander Halaska of Justice’s Office of Immigration Litigation told U.S. District Court Judge Cynthia Bashant that the present administration is reassessing the policies that officials often refer to as “metering,” but which critics call a “turnback” of asylum-seekers.

“The queue management policies at issue are under review,” Halaska said, adding that revised guidelines are expected within 60 days.

Halaska insisted that the policies were designed to “prevent operational emergencies” that overwhelm border facilities, creating dangers and unsanitary conditions for both immigrants and border officials. “The metering policies are geared towards preventing those emergencies before they occur,” he said.

However, an attorney for the immigrant rights group Al Otro Lado said evidence obtained since the suit was filed in 2017 showed that the policy was not linked to exigencies and applied even when facilities had ample space.

“As a factual matter, there are no operational emergencies in the record before you,” said Stephen Medlock of law firm Mayer Brown.

Medlock also said the Biden administration’s statement of its intentions shouldn’t affect the course of the litigation.

“I don’t think the government’s commitment to withdraw those memos should have any effect in this case [intended] to keep the government from ever doing this again,” the lawyer said.

Medlock said the central problem with the policy is that it amounts to the executive branch imposing limits on asylum rights that Congress never restricted in that way.

“Defendants acted in excess of those statutorily delegated powers by creating false discretion” to turn away asylum applicants, the lawyer said. “They create discretion for CBP officers where none existed. … There is no wiggle room for them.”

“Once an asylum seeker is in the process of arriving in the United States, they must be inspected and processed,” Medlock added. “An executive branch agency is not allowed to amend a statute simply because it isn’t working out for them.”

Another attorney for the immigrants, Baher Azmy of the Center for Constitutional Rights, emphasized that the legal obligation not to turn back asylum-seekers with meritorious claims is rooted in U.S. shame over a ship, the St. Louis, that was filled with about 900 Jewish refugees from Germany that was refused permission to dock in Cuba, the United States and Canada in 1939. The boat returned to Europe. where more than 200 passengers were eventually killed in the Holocaust.

“That is what the norm is designed to prevent and what the government is systematically violating here,” Azmy said. “It’s one of the most important norms in international law.”

However, the judge said the issue of precisely when and where asylum rights attach remains murky in much of the world, especially as many countries confront migration crises at their borders.

“Part of the problem I have is this isn’t the only country that’s been struggling with the issue of pushback, and I’m just not sure that it’s gotten to the level of all the international community agreeing that is an international norm. I struggle with that,” Bashant said.

Azmy said the norm has been accepted by over 240 countries, but the judge said it was not clear that all countries grant asylum at their borders or avoid steps to drive asylum-seekers away from checkpoints.

Bashant appeared to agree with the immigrant rights lawyers that the prior use of numerical caps — some early versions of which date to the final months of the Obama administration — contravene the statutes Congress has written that don’t impose such limits.

“Don’t you have to go to Congress and say, ‘Change this statute. We can’t comply with it?’” Bashant asked Halaska.

“The government hasn’t abandoned its statutory obligations,” the DOJ attorney said, noting that immigration officials processed more asylum seekers each year from 2017 to 2019.

But Bashant, an appointee of President Barack Obama, said that didn’t reveal much. “That’s an abstract number. You don’t know how many sought asylum and didn’t have access,” she said.

The judge issued no ruling Tuesday, but said she would try to do so as soon as possible.

For the moment, the legal debate is largely academic. The Biden administration, much like the Trump administration, is relying on a quarantine-related health authority known as Title 42 to squeeze the flow of asylum-seekers through official border checkpoints to a trickle.

When and if the coronavirus pandemic abates or the Biden administration abandons the health-related embargo, the question of its other authorities to limit the number of asylum seekers will again become more urgent.

PrevPreviousHow can socially just pedagogy be applied in higher education?
NextArticle of the month – Issue 4, 2021Next